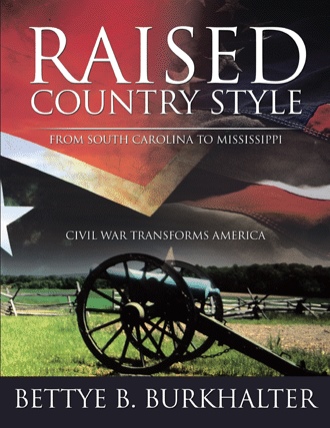 The saga continues with Dr. Burel’s son James leading the Mississippi-bound wagon train from to .  The first Christmas in Attalaville was a grand celebration of their newfound life and another grandbaby on the way.  As Mother Nature hurled harsh weather across the homesteads, James’ daughter showed no signs of delivery.  Sleet pecked noisily on the window panes and icicles hung like daggers on the eaves.  Late one evening Anne Elizabeth was hit with excruciating back pains.  The long and wretched labor delivered another healthy baby girl.  James and Lisbeth proudly held their tiny granddaughter and looked at each other with disbelief.  She was the spitting image of Anne Elizabeth born to them twenty-seven years earlier.  Anne slept and grew weaker each day.  Unfortunately, the only doctor was too far away to fetch during the furious snowstorms.  Puzzled, Anne looked at her mother and whispered, “Mama, it wuzn’t this way before.  Somethin’s wrong.”  At daybreak Joseph lovingly reached for his wife.  He screamed for Lisbeth frantically begging, “Lisbeth, help her — for God’s sake do somethin’!”  Her dark eyes were partially opened and fixed peering into infinity.  Her husband and parents locked stares in disbelief while shock quickly numbed and prepared them.  Deep animal groans gushed from Joseph’s chest as he dashed outside into the snow in his nightshirt.  Sobbing, Lisbeth fell against James in despair as their beautiful daughter joined thousands of other women who died from childbirth.  “Oh my merciful God!  Why Anne Elizabeth?  Why?  Please tell me why!”

Years went by and the Burells enjoyed Mississippi’s Golden Years reaping prosperity as landowners and independent farmers.  As the cotton kingdom grew, plantation owners became richer and small-time farmers prospered.  Life was good.  Slowly, heated discussions concerning states’ rights turned into fire-eating debates.  From the richest aristocrat to the smallest farmer, protecting their way of life drew deep lines between the North and South.  Threats of southern states seceding from the Union unfurled from country stores to the streets of .  Too soon, the dreaded war swept across the southland.  Grueling years at war passed slowly.  Finally, the long awaited furlough sent the old sick and ragged Rebel walking down a muddy road outside .  Flooded places forced James to tie his worn-out shoes together and throw them across his shoulder.  Thirty miles later the outline of his house came into view.  Cursing the war for its destruction, his heart pounded out of control as he walked through his unplowed fields knee high in weeds.  Turning the corner of his barn, pots and pans echoed from the kitchen.  Drifting aromas of turnip greens boiling with hog fat and sweet potatoes baking in the oven met him in the backyard.  "Praise God!  I'm finally home," he muttered to himself. 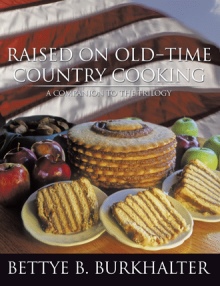 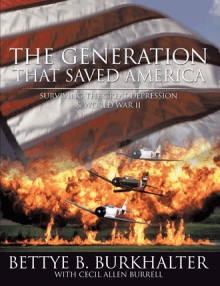 The Generation that Saved America
Bettye B. Burkhalter
£54.03 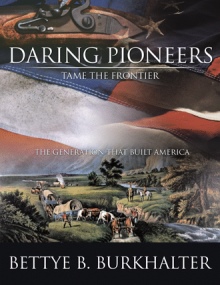 The saga continues with Dr. Burel’s children moving west.  His son James led the Mississippi-bound wagons from South Carolina into another untamed frontier.  Their first Christmas in Attalaville, Mississippi, was a grand celebration of their newfound life, only to have the New Year bring tragedy.

Mississippi’s Golden Years brought prosperity to the pioneers as landowners and independent farmers.  Too soon the Civil War swept across their land leaving King Cotton reeling and survivors coping with shattered lives.  Sympathetic eyes of the world watched as they searched for ways to survive the aftermath of total war.  Lisbeth Burel struggled with the heartbreak of losing the war, her husband James, and her youngest son.  Bracing to survive post-war defeat and economic ruination, Lisbeth and her oldest son learned to cope with the nagging pain and hatred of a useless war.  With the burden of the world on William Riley’s back, he turned to God and self-reliance to get them through the bleak future.  Recovery was slow, and families joined hands to plant new fields of cotton, corn, and sorghum cane.

Thirty years of worry and hard work turned William into an old, sick man long before his time.  On a cold October morning, the stooped and frail man shuffled toward the sugarcane mill and furnace.  Assuring the old family recipe and tradition continued, he taught his grandson how to cook molasses to be as smooth as silk.  A couple months later William’s family celebrated the biggest Christmas since the war.  Sadly, two days later the celebration was marred as his thirteen proud children mourned the loss of their Pa.  After the war, William Riley took great pain to instill the belief that they, and their kind, were the moral fiber offering the best hope for rebuilding the New South.  And they were.

Bettye Burrell Burkhalter is a Vice President, Associate Provost, and Professor Emerita at .  Academic research and fellowships with , the  International Academy of Astronautics, and the British Interplanetary Society sent her around the world.  Upon retirement she teamed with her eighty-nine-year-old father, Cecil A. Burrell, to capture a way of life they both loved and valued quickly fading into the pages of time: country style living.

Spanning four centuries, the saga is a testament to the author’s uncompromising vision to recapture the life and times of Dr. John Burel and his family in search of the American Dream.  Bettye brings to life the characters who pioneered westward into the heart of urvived the war that transformed America.

Although Dr. Burkhalter worked and visited in over a dozen countries, she prefers the quiet countryside at her rustic log home retreat.  There in the peace and quiet of nature she does most of her writing.  “There is no substitute for awakening to a sunrise with singing birds, hearing a whippoorwill’s lonesome call to his mate at dusk, or watching lightning bugs flash by on a warm summer night,” she explains.  Bettye and her husband, Boyd, also live in .