The Many Faces on the Bus

A Fascinating Book of Short Stories 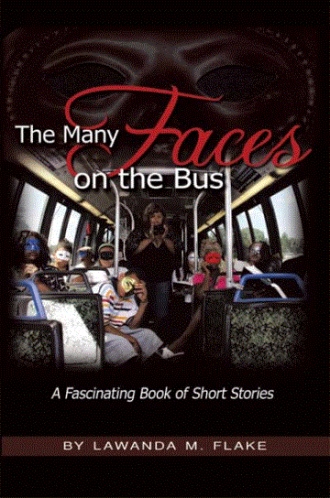 I’m standing at this stop waiting on the bus to pick me up. I am really feeling discouraged about taking this ride, I feel real sick and weak. My hair is in braids and it is very irritating right now. The bus finally arrives to pick me up and it is very sunny out here, but it seems so dark and gloomy as I stepped up on the bus. I get on the bus and notice that there are not a lot of people on it. I pay my fare and when I was looking for a seat, I had an uncomfortable and unpleasant feeling. There’s so much pain, anger, hurt, and sadness on this bus, but very little happiness and I could not just let it go. As I proceed to my destination, I sat in the seat with my back facing the window near the back of the bus. I began to look around at the different faces on this bus, but not because I was being nosy; It was like I knew each and every one of these people.

Each one of these people has something about him or her that reminds me of myself, some of the things that I have been through in my life. I couldn’t help but feel or wonder what they may be going through. The confusion and uncertainty of what direction their life is headed. The being used to having everything in control, then all of a sudden, it feels like your control is ripped right from you and now you don’t have any anymore.

As I look around on the bus, I see a man up at the middle of the bus sitting in a seat right next to the window. The man has a layer of clothes on and he has so much hair all over his face. He looks like he hasn’t shaved in months. I watched as his head lay lifelessly against the window. He appears to be asleep; while his head was dangling back and forth as the bus is moving so carelessly hitting what seems to be every bump and pothole it crosses, without even attempting to avoid them. Next to the man is a black garbage bag that had to be his belongings. He was sleep on it, (I could tell because the bag had a hole in it that had a dirty pants leg hanging out.) holding on to it tightly with his hands. The sound of him sleeping is what caught my attention. It wasn’t snoring, it was more like a sighing. So tired and so sad, as the smell of urine from his clothes penetrates the air while his face is full of so much tiredness and pain, not even remembering how he got that way. I can see him crying out in silence for help, no one sees him and all people seem to do is talk about him and never ask how they can help. He does not know where his next meal will come from. I can see by just looking at him, that he is afraid that the bus driver is going to put him off the bus. With no place to go and no food to eat, either way his time is up.

I cannot help but think that this could be my uncle or brother, maybe even my father. Wow, how strange would that be? I never met my father.

This man has to find somewhere else to go. After all the bus driver did let him ride free.

I was wiping my face with a piece of paper towel I had gotten out of my purse and as I wiped my forehead I got a glimpse of a woman on the bus sitting on the other side right across from me. I balled the paper towel up in my hand. I looked at the woman and she looked up at me and gave me a greeting by nodding her head and I nodded back. She has very long beautiful hair and her face is like an angel, very beautiful with no flaws whatsoever.

Sitting on the seat next to her is a box of dough nuts that she had bought especially for the kids. The woman was feeling sad about the many many mistakes she had made over the years. As she looked down at the box while attempting to open it, her puffy hands grabbed the box opening the lid. Her stomach was telling her to eat them but her heart was saying, “No, please don’t you know what the doctor told you, if you do not slow down, you could die at a young age. Than her lips said, “I can’t help myself. I feel sad a lot and it seems like eating is the only thing that makes me happy and it make me feel whole.” The woman took a deep breath and closed the lid with a sad look on her face.

I think about how my mom died at a young age and how it had affected my family, but she wasn’t honest about her health and what was going on with her, there are still unanswered questions.

The Many faces on the Bus

This book is about judgment and the many faces it holds. Let’s just call it the reality check. Have you ever looked at somebody and completely disected their life, I mean not only looking at them, but the way you look at them, you didn’t have to say a word. You are judging them for what they are wearing and just simply for what they look like. Have you caught somebody looking at you and wondered what they were thinking? Maybe it was not one of your best days and just like that, that one look made you feel unsure about yourself. See it really wasn’t you; it was that person judging you without even saying a word.

See, I’m the narrator in this book, riding  in the city with a group of people on the  bus. Each character has something about them that stands out. I sit back and tell their silent stories as if I could see what they are going through. Not all are tragic; in fact some are uplifting. The many struggles and pain is what people may misconceive. I think this book will begin the healing process in some, and the learning process in others. They will begin to see their own faults and go on from there. Some people are so unhappy with their life they self-consciously put the focus on others to avoid their own problems. Honey, you’re only setting your self up failure.

Part of this book is about some of my pains and struggles dealing with judgment.

This first time author speaks on judgment and the personal effects of it, when it is use the wrong way. The Author talks about her own experience in this book of short stories and how she learned how to over come what people misjudged her to be. She connects her self to some of the charactors in these mind blowing stories. don't be afraid to identify your self as one of the charactors, it could began the healing process for you.

La Wanda M. Flake was born and raised in the city of Detroit. Forced to take care of herself at the tender age of fifteen where life didn’t seem to get much easier for the young mother.

She took everything that life threw at her and still mange to come out praising God. The Many Faces on the Bus is a product of her life and some of the things she’s endured over the years; not all stories are hers, but can you tell which ones are?