A Dawning of Power

by Dustin Feyder with Joseph Feyder 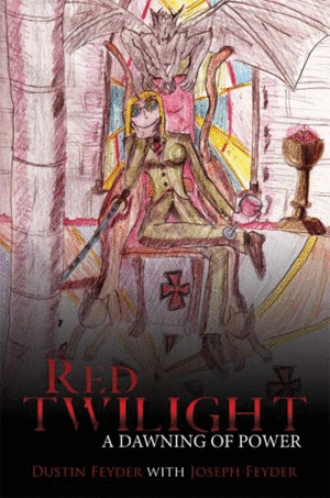 “Hey!” Pistol yells from above, “Which one of you boys is daddy?” He pounds the handrail to get the party’s attention.

“Great,” Pistol yells down. “Big Stuff, give me a hand,” he calls to Lacerti. The tall man smiles and nods, recognizing that the child is with Pistol. “Ashley, I’m going to wrap my whip around your hands and lower you down.” Pistol kneels. “That man is a friend of mine. He is going to catch you. Then I’ll jump.” Ashley smiles and nods her head. Pistol slowly lowers Ashley to the ground as far as he can until he runs out of slack, then drops her into Lacerti’s waiting arms.

Suddenly with no sign of warning the swarms of flesh eaters return, double in number. These ones are twice as aggressive as the ones before. Pistol’s eyes go wide as he mumbles, “Oh shit,” then dashes off to the other end of the catwalk in search of a way down.

A beast leaps at El, but the bald man slugs it, then it crunches as Lacerti slashes it with his gun-blade. Larry and Snake stand side-by-side, flashing their own blades. “Follow me, bro,” Snake instructs, and they begin moving, clearing an escape route with merciless aim and skill.

Jacob holds out his shotgun-cross and begins to sidestep toward Ashley and Lacerti. The beasts thin out, letting him pass. One brazen monster charges him, ignoring the pain that staring at the cross induces. Jacob pulls back his weapon, draws the knife, and strikes a deadly blow across the monster’s torso. The cross now broken, though, half a dozen monsters rush him simultaneously. Jacob shouts a battle cry as he lets a raging halo of slugs fill the air and then starts furiously slashing his way through the hellspawn.

But Jacob seems to weaken, and suddenly he stops in mid-swing and drops his knife. He moans as he grabs at his chest. Time seems to stop as both the beasts and the men look to see what has happened. The last of his strength nearly gone, Jacob closes his eyes and falls to his knees.

“Lances!” Snake yells. He turns around and recommences combat by unloading the rest of his clip into one of the beasts facing Jacob.

El glances over as swings around a monster to break its neck. “On your feet, old man,” he whispers. “It’s too early for you to die.” Lacerti howls as he cuts his way to Jacob.

“Charlie!” Ashley calls. “Help us!” Ashley runs to her father, shoving several monsters out of her way. Trash runs at her to stop Ashley from rushing into the mist.

“Stop!” Trash orders. Ashley begins crying as her father falls forward onto one hand. Spooky shoulder rushes two zombies away as he shelters the two girls.

Pistol watches the chaos below. “Fuck,” he thinks aloud, finding no easy route down to ground level. “Tally ho!” he yells, gallantly leaping from the catwalk to Jacob’s aid, playing the role of Ashley’s white knight. He lands on two monsters, seemingly crushing them.

El points to Jacob and commands, “Pick him up.” On cue, Lacerti tosses both Ashley and Jacob onto his back. “Fall back, double time,” El orders, waving his unit onward to safety.

The group, now nine strong, fights their way past the waves of the dead. Pistol collects his whip and takes up the rear as they head to sanctuary in the storage room.

What a terrible night to have a curse, Pistol thinks as they’re running. The battles have already been trying and plentiful, and the night has barely begun.

Something is wrong, Jacob thinks as he drops his knife. My heart is pounding. I can’t breathe. He looks up as he hears his friends calling him and his child cry. Everyone is fighting, as I should be. Jacob looks from side to side as he hits his knees. I hear voices, but I don’t recognize them. Is it the demons that surround me? Jacob sets one hand on the ground to prop himself up.

We have won. The cleric belongs to us. The hunters are powerful as always, but we are endless, the demons taunt him in his mind. Jacob lays his other hand on the ground, and the world seems to shatter around him. The gray stage still stands, the red curtains, the cool stone floor, dozens of tables. But now he is alone aside from the sound of crows cooing overhead; the crows flutter about. The pain has stopped, along with nearly all feeling.

The giant metallic doors seem to crack open ever so slightly...

Welcome to Red Twilight, Here the line between good and evil becomes hazy, monsters can be beautiful and men can be demons, fallow along with Richard Blake into a blakend maze of nightmares: drawn from the minds of ten fellow travelers...

Begin with four groups of drifters as the mouth of hell seems to open up benaeth them, thay must become a team to survive a night like no other. each must unlock their inner might to become heroes. here in the first act in the "Red Twilight" saga "A Dawning of Power"

“All of you, look at yourselves, and look at the men and women with you. What do you see? Ten men lost and afraid? I don’t. I see destiny, not happenstance. Vampires, demons, aliens—it shouldn’t matter. We have a purpose, and we have power. Who are we? A witch, A warlock, and a cleric,” Jacob points at Trash, Pistol, and himself. “A white knight and a giant,” he points to El and Lacerti. “A marshal arts master, and two rogues,” he points out Spooky and the Gekks brothers. “There is but one monster down here, and it is no man, it is a philosophy—the philosophy of hate and greed and lust. It poisons our hearts and our minds with its filth, killing us from the inside out. But we are the divine, we are chosen, to consecrate this place, this idea, this evil.”

I'm a gamer, I love games, be it : 'Magic the Gathering' 'AD&D' or the latest computer game on the market. so when I set out to write I wonted it to feel almost game like, fast and colorful with lots of heroic characters, some maybe even looking vileness at first glances.

Even up to date here at 25 years old I'm still playing game like in high school (I graduated from HHS in Hudson Wisconsin class of 2001) even then, may be before then I thought writing would be a dream job. So I've spent years writing short stories and then drawing sketches of my characters. But not till now have I felt that anyone would want to hear my story, out side my sisters and brothers.

I was a priest under the offices of the LDS church for three years. I studied philosophy for some time, learning the fundamentals of a multitude of religions before finely coming to the conclusion that what one believes isn't as meaningful as that one simply should believe. Every man is afforded the right to there own faith and in return should be aloud to keep it without the stresses of contrasting it with others.

Currently I am working with 'Red King/ Burger king corp.' lawfully employed for 5 years and I'm delighted.I have also been working for a company called Catapult Comics as a favor to a friend.