Ode of an Oilman 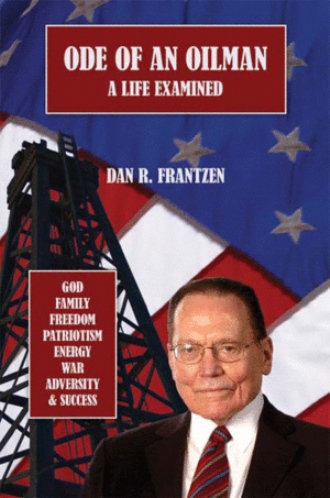 …This may well be the most important section in this entire book insofar as the destiny of unfolds, from this time forward.

I have great confidence that the right candidate will come along and recognize the significance of this vast undertaking described in the October 10, 1986 letter to President Ronald Reagan, together with “Oil and Gas—A Savoir For America”, written August 29, 1992.  It will require a special person of great creativity and vision; one who is totally dedicated to President Lincoln’s concept, “A government of the people, by the people, and for the people”; who is dedicated toward defending the Covenants of the Declaration of Independence and the Constitution of the United States, at all cost; who strives valiantly to increase productivity from all industrial sectors, thereby, reducing our imports; one who believes in creating tax revenue from increased domestic productivity, instead of increasing taxes on its people and corporations, who are the lifeblood of this great nation; one who believes in the contemporaneous development of all America’s massive energy resources; one who cherishes patriotism and openly expresses gratitude for just being an American; lastly, one who keeps his campaign pledges and leads by example. These are the brief fundamental requirements for qualification.

Before a candidate can fully qualify, however, he must possess outstanding character traits, leadership qualities, and great strength which can only come from integrity, confidence of convictions, perseverance for freedom, courage in war, humility in victory and denial in defeat, oppression, and poverty.

He must also be able to choose wisely those members of his cabinet and the Supreme Court to whom he delegates inalienable rights of the highest magnitude. In other words, he must gather a Mastermind Group second to none.

Such a creative individual, with vision, can lead back toward self-sufficiency, economic prosperity and boundless opportunities for all Americans. This can only come to pass with the right Congress.  As Abraham Lincoln said, “A nation divided cannot stand”; then it was north versus south; now it is dissention between industry and Congress.

With creative, bi-partisan support from Congress, Industry offers the best means to lower imports by maximizing productivity from all business sectors.  This, in turn, will generate the most jobs for the people, lower product costs for the consumers, most tax revenue for the government and strong, healthy industries on which to build the future security of .

This reflects free enterprise at its best, without excessive taxes on the American people, the business sector and all other social/political trumped-up schemes; no country can ever elevate itself to business greatness by raising taxes.  To the contrary, as domestic productivity goes up, taxes will go down, and it should start by first eliminating taxes on the lowest income levels.

The upcoming presidential election will only be the first step in attaining this admirable goal which is so critically important to the future of . If our present Congress doesn’t start governing like professional statesmen, instead of irresponsible politicians, we the voter must reclaim our government by replacing this negative, uncooperative Congress with innovative, optimistic leaders who are driven by patriotism, logic, and reason. Irrespective of party affiliation, Congress’s 9% approval rating suggests that they are not voting the will of the people, and it is now time for the voters to exercise their right to force term-limits, since it is very unlikely that Congress will vote themselves out of office.

Born in the Great Depression, Dan R. Frantzen worked his way through poverty, adversity and hardship to the pinnacle of his career.

Through the help of his young daughter, inspiration discovered Dan and he began his journey writing to help others for the next 40 years. His definition of ‘Success Through God’ has helped him and many others overcome their problems by Dan’s efforts of advice and encouragement. Dan’s belief that we are all in service to God makes the point that the lord is with us through every trial and tribulation.

Mr. Frantzen learned the secret of turning problems into answers. With God, a positive attitude and some luck, he turned his life of adversities into benefits that lasted him a lifetime.

Dan’s entire career in the oil and gas industry was met with the ups and downs of the industry. The lessons learned on this path led him to his greatest career discoveries and helped him meet many ‘Divine Connections’ that have stayed with him the duration of this life.

Since 1977, Dan has been corresponding and fighting for our ’s economic stability. Predicting our current energy crisis, he has been writing letters to Presidents and Congressmen in an effort to save and its oil and gas industry.  Learn how Dan’s economic plans could bring us back to world economic supremacy, regain the respect of the world and help us chose a proper leader for America.

Life is not complete without family; and Dan lovingly describes his moments with his children. Mirroring himself, his children set out on the road of life at an early age with a pioneering spirit that Dan could only liken to his own.

Finally, an amateur philosopher, read miscellaneous articles that encompass Dan’s many thoughts and feelings in regard to this life.

Mr. Frantzen has over 48 years of experience in the oil and gas industry.  In 1955, he earned a Mining Engineering degree from the of at .

In 1973, he wrote an Exploration Philosophy in order to build a major oil & gas producing company.  Mr. Frantzen was co-founder, President and Chief Operating Officer of Stone Oil Corporation which grew from a $3,000,000 start-up company to a public company with a current market cap of over $1.1 billion on the NYSE. Upon Stone going public, Mr. Frantzen returned to his first love of geology, started a small, private office.

Dan R. Frantzen happily resides with his wife, Claire, in , “I think I have the best marriage because Claire shares me with my other love—my career.  When I’m not with Claire, I spend most of my time utilizing my God-given talents, educational background and empirical knowledge to unravel the mysteries of how and where Mother Nature has hidden Her oil and gas treasures in the Earth—She is the master of vagary!”