A Visa or Your Life! 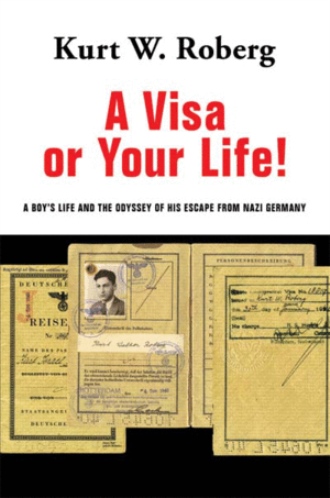 One morning in April, when I was not working at Wannsee I walked past the Woolworth’s store at nearby Alexander Platz and noticed a big sign in a window display of thermos bottles. Like most other consumer goods, these were a rarity in wartime , since all production efforts were for military output.

Seeing the bottles, I instantly thought how nice it would be to have one for the anticipated trip to . We had already been told that the journey would take five days, and that we had to provide our own food. These thermos bottles would be great for the whole group, and they were cheap, only 3.95 Reichsmark each. But it was not even ten o’clock in the morning, and surely by four in the afternoon, when Jews were allowed to shop, these bottles would be gone! I decided to try my luck and test my alleged non-Jewish looks. (In during Hitler’s time, being told that you didn’t look Jewish was considered a compliment). In the store there was a big counter with what seemed like hundreds of thermos bottles piled up behind it. A nice looking saleswoman, perhaps thirty-five years old, approached me from behind the counter. “Can I help you?” she asked.

“Yes, I would like to have some thermos bottles,” I said in my perfect high German.

“Thirteen?” she said, with some suspicion in her voice. “Why do you need that many?” Now I had to think fast and act calm.

“Oh, our class is making an Ausflug (class trip) and it will be good to take some hot drinks with us,” I said, thinking back a few years to when I had indeed participated in an overnight trip with my class in Celle to the Harz Mountains. But I had no idea if such class trips were still being done, now that it was wartime.

The woman looked at me with critical eyes. “Are you Aryan?” she asked. “I think you may be non-Aryan.”

My thoughts were racing. Only self-assurance and a little chutzpah would get me out of this situation.

“I am Auslanddeutscher,” I replied, “I come from and there we don’t know just what that is, Aryan or non-Aryan!” I knew from my years of growing up in that German citizens (Gentiles) living in foreign countries had the privileged status of Auslanddeutscher, because they were counted on for support of the Fatherland, and were expected to be loyal and supportive.

“So, you are Auslanddeutscher, then let me see your identification card, I don’t believe that you are Aryan!”

“I don’t have an ID card, I have a German passport, but that is at the authorities, here is my police receipt.” With that, I showed her the receipt.

“Well, I don’t think you are Aryan, I cannot sell you anything now. You have to come back after four o’clock,” she said.

“If you don’t want to sell me anything now, I will come back,” I replied. But just to show her that I felt wronged, I added, “Will you please put aside thirteen bottles for me, to make sure they are not all sold out by this afternoon?”

The woman said she would, and I left. At four o’clock I was back at Woolworth’s and the woman had put the

This book, an autobiography, starts with the story of a Jewish boy growing up in Nazi Germany, related from the viewpoint of a teenager. He tells us about his youthful experiences and impressions, the restrictions and degradations forced on Jews by a hostile, totalitarian regime, and the ultimate struggle to secure the permits and visas for a life-saving emigration.

After his escape to , he is caught there in the grips of war and survives the bombardment of . His adventures continue with his ongoing struggle to obtain the necessary transit visas in wartime as the Nazi’s plan had escalated from hostility toward Jews to their destruction. His problems do not end when he finally reaches the . Eventually, however, he is reunited with his family.

The author then takes the reader to of the 1940s and army life in World War II during his tour of duty in the Pacific.

His trips back to after the war open a door to the emotions of returning to a scene of humiliation and brutality, as well as recognition of those righteous people who helped his family in their hour of need.

The book relates a wealth of historic information and succeeds in painting a vivid picture of a world at war, a young man and his family’s escape to freedom, and coming to terms with the past through redemption and recognition.

Kurt Roberg was born in , where he grew up during the Hitler years. As a young teenager he was able to escape to after Kristallnacht and eventually made his way through wartime Europe to the . After serving in the US Army for three years during W.W.II, with duty in the Pacific, he began a business career in the photographic supplies industry. He attended City College of New York at night, graduating with a BBA degree in marketing. Extensive business travels took him to Europe, South America and the . While raising his family in , they all vacationed frequently in .

Now retired from business, widowed and with his children grown, he remains active in his long-time interests of photography and travel. His past activities in sports included playing soccer and skiing; now he still enjoys biking and tennis. A fascination with history and researching his family genealogy are evident in his more recent avocation of writing. His first book, written in German, was published in in 2005.

Kurt has given presentations on his experiences in Nazi Germany as well as about his participation in an exhibition, Home & Exile, shown at the Jewish Museum in during 2006-07.  It documented the story of his flight from tyranny and the start of a new life in .