The Almost Wet Your Pants Book of Humor 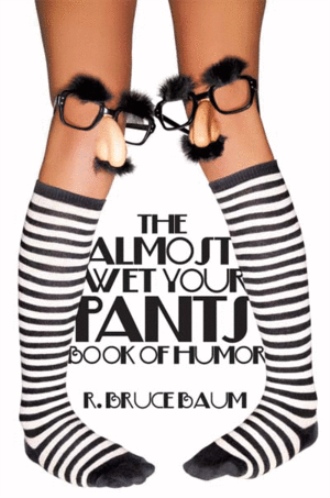 OUT OF THE MOUTHS OF BABES

A kindergarten teacher was observing her classroom of children while they drew. She would occasionally walk around to see each child's artwork. As she got to one little girl who was working diligently, she asked what the drawing was. The girl replied, "I'm drawing God." The teacher paused and said, "But no one knows what God looks like. Without missing beat, or looking up from her drawing the girl replied, "They will in a minute."

The child comes home from his first day at school. Mother asks, "What did you learn today?" The little boy replies, "Not enough. I have to go back tomorrow."

- I have kleptomania, but when it gets bad, I take something for it.

- To err is human; to blame it on somebody else shows management potential.

- I'd give my right arm to be ambidextrous!

- Wrinkled was not one of the things I wanted to be when I grew up!

- A good friend will come and bail you out of jail...but, a true friend will be sitting next to you saying, "Wow...that was fun!"

- Life may not be the party we hoped for, but while we are here we might as well dance.

- My dog can lick anyone!

- No man has ever been shot while doing the dishes.

- What if the hokey pokey is really what it's all about?

- Never knock on Death's door. Ring the bell and run, he hates that.

- I almost had a psychic girlfriend but she left me before we met.

Two women met for the first time since graduating from high school. One asked the other, "You were always so organized in school, did you manage to live a well planned life?" "Yes," said her friend. "My first marriage was to a millionaire; my second marriage was to an actor; my third marriage was to a preacher; and now I'm married to an undertaker." Her friend asked, "What do those marriages have to do with a well planned life?" She replied, "One for the money, two for the show, three to get ready, and four to go."

A little girl goes to the barbershop with her father. She stands next to the barber chair, while her dad gets his hair cut, eating a snack cake. The barber says to her, "Sweetheart, you're going to get hair on your Twinkie." She says, "Yes, I know, and I'm gonna’ get boobs too."

A woman had been called for jury duty, but she declined to serve because she did not believe in capital punishment. The judge tried to persuade her to stay: “Madam, this is not a murder case. This is merely a case in which a wife is suing her husband because she gave him $4,000.00 to purchase a new fur coat for her, and he lost it all at the racetrack. “I’ll serve,” she said, “I could be wrong about that capital punishment thing.”

As a senior citizen was driving down the freeway, his cell phone rang. Answering, he heard his wife's voice urgently warning him, "Herman, I just heard on the news that there's a car going the wrong way on Interstate 77. Please be careful!" "Hell," said Herman, "It's not just one car. There's hundreds of them!"

You might be asking yourself, “Should I buy this book? Is it really going to be funny? Will it be any better than the hundreds of other humor books I’ve read? Is it worth the money? Who is this guy Baum anyway? Could he be related to that guy who wrote ‘The Wizard of Oz?’.”

Those are all good questions, but you will never know until you take a risk and go for the gusto. This book created an opportunity to combine different types of humor from multiple sources. The humor selected includes stories, quotations, real events, jokes and other cool stuff. I have selected the best of the best because we know how discriminating you sensitive, intelligent and creative readers can be. If you pick up a book of humor, it should be funny.

In the event you don’t have a lot of time to spend in a bookstore reading this book without purchasing it, here is one example:

Top Five Things NOT To Say To A Police Officer

5. Gee Officer, that’s terrific. The officer that stopped me earlier today only gave me a warning too.

4. I thought you had to be in good physical condition to be a police officer.

3. Officer your eyes look glazed – have you been eating donuts?

2. You’re not going to check the trunk are you?

1. Could you hold my beer while I get my license out?

Everything in this book may not be the funniest you ever read, but if you do not laugh at most of the content, you should immediately check yourself into a local nursing home or cemetery.

Dr. R. Bruce Baum, a legend in his own mind, is a Professor in the Exceptional Education Department at Buffalo State College and the ‘Head Honcho’ of HumorCreativity.Com. He received degrees from the University of Cincinnati, and Indiana University. Dr. Baum is author of How to Motivate Audiences: 121 Warmups, Icebreakers and Activities for Promoting Creative Problem Solving, Teamwork and Laughter (Bates Jackson), The Almost Wet Your Pants Book of Humor (Author House), 20 Magic Tricks for the Magically Impaired (DVD) and the MEGA TRAINING CD.

Dr. Baum received the President’s Award for Excellence in Teaching from Buffalo State College. He is a Colleague in the Creative Education Foundation, a leader in the Annual Creative Problem Solving Institute, a member of the International Brotherhood of Magicians, a member of the Roswell Park Cancer Institute Humor Project, a Certified Laughter Leader, a member of the Association for Applied and Therapeutic Humor, a faculty member of Now to Wow(tm) Adventure and Learning Programs and a Certified Rock Balancer. He has presented on humor, creativity and other topics in Singapore, Cyprus, Jamaica, South Africa (6 times), Costa Rica, Canada and many states in the U.S. In his spare time, Dr. Baum is a Rocket Scientist, Bronco Rider, Taxidermist, Explorer, Brain Surgeon and Gourmet.