An Ambulance With Wings

Learning to Trust God through the Journey of Isaac: A Special Needs Child 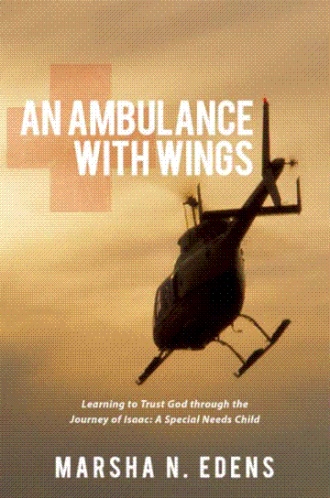 As they rolled Isaac from the ambulance and across our front yard toward the helicopter, he had gone completely limp and lifeless.  As we approached the helicopter, the wind from the still spinning propeller made it difficult to hear.  Isaac was rushed into the helicopter and we were left with no time for long good-byes.

We quickly gave him a kiss, and as the door of the helicopter closed I screamed, “I love you baby.”

The fire department then asked us to back up and clear the area.  As we did, the helicopter’s propeller began to pick up momentum.  As the blades hit max speed, you could see, hear and feel the powerful current of air that carried the helicopter in flight.   They lifted from the ground and as quickly as they had landed - they were gone, and so was my baby. The feeling of helplessness that I experienced as I watched my almost four year old son fly out of sight was one that I have yet found words to describe.  The one thing that gave me comfort that day was realizing that God had heard and answered the prayer of a desperate mother.  He had put wings on an ambulance, just as I had prayed for.  He had sent an emergency helicopter; it was “An Ambulance With Wings,” sent by God to spare life saving minutes for Isaac’s life.  It was that amazing answer to prayer that titled this book long before I ever dreamed God would ask me to write it.

An Ambulance With Wings is a story of faith and how God works through ordinary people.  The story begins with a couple who lived without thinking of God or His purpose. As their story unfolds, through the birth of their son, God finds them in a neonatal intensive care unit.  Within minutes after Isaac’s birth, he begins to have horrible seizures followed by a multitude of tests to find their cause.  As their son fights for life, the days are not easy as hours turn to days and hope turns to despair.   The couple is devastated as they learn their newborn son has suffered bilateral strokes while still in the womb.  A diagnosis of cerebral palsy and epilepsy combine to form a bleak prognosis, that’s where faith comes in.

It is often said there is no medical explanation for why Isaac survived.  In only four short years Isaac was in intensive care 8 times, hospitalized 3 additional times, airlifted by helicopter 3 times, taken by ambulance 3 more, on life support 2 times and underwent 2 major brain surgeries for status seizures.  Still, Isaac does what many thought he may never do: he walks, talks, runs and has normal intelligence.  Even more amazing, since hemispherectomy brain surgery, Isaac does all that with barely over half of his brain.

In An Ambulance With Wings,  a mother gives you heart wrenching details of the days spent in intensive care with not only Isaac, but his younger brother who also spent time in the neonatal intensive care.  You will feel that you are there as you travel the journey from birth to brain surgery and beyond.  You will find encouragement in your own walk with the Lord as you witness how God used the events of one child’s life to build a testimony!

Marsha N. Edens lives in with her husband, Mike, and two sons, Isaac and Caleb.  She holds a Bachelor’s Degree in Business Administration and previously worked in the healthcare field in Human Resources.  Marsha now works part-time with Family Connection of South Carolina.  With Family Connection, she has the opportunity to reach out to other families that have children with special health care conditions.

Marsha strives to increase awareness of infant stroke. Her writing has been published in Neurology Now, an official publication of the of Neurology (AAN).  In addition to the love of her job and for writing, comes an even higher priority-she dedicates her days to raising and homeschooling her children.

Marsha also loves having the opportunity to share what God has done for her family while using her gift of public speaking.  She shares her family’s story to educate, encourage and spread the Word of God.  She, along with her husband, Mike, have spoken at churches, support groups, ladies groups, schools and community clubs about their family’s testimony.