A laboratory guide for medical microbiology 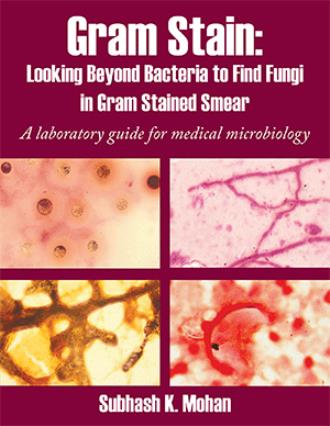 Although there are several medical mycology textbooks available on the market, each containing a chapter on direct microscopy, none has addressed the use of the Gram stain for finding fungi. This book will be the first to advocate the use of the Gram stain as an additional method in clinical microbiology and mycology laboratories for detecting fungi. The Gram stain is often neglected or considered suboptimal for this purpose. However, with the trained eye, much additional information can be gleaned from the Gram stain. This book will describe many scenarios where the Gram stain has been useful for the laboratory diagnosis of fungal infection. When a fungal infection is present but not suspected clinically, the Gram stain may be the only clue to the true cause of the infection. This book is based on the innovations and experience of the author and hopes to introduce an additional tool to the very subjective field of medical mycology.

The Gram stain is the most rapid and cost-effective procedure and is an extremely useful defense mechanism to identify fungi in the direct smears and help the clinicians to promptly treat patients suffering from microbial (fungal) infections. This book will guide the reader in the recognition and identification of fungal elements in Gram-stained smears, especially when they are distorted or remain unstained and undetectable. There are times during examining of the direct Gram smear when cells other than bacteria are observed and the smear reader questions whether you would detect a round or oblong cellular structure in a Gram stain and be able to classify it as debris or yeast. Astute Gram stain skills have the potential to immediately and positively impact the quality of patient care. This new textbook focuses on the detection and classification of fungal elements in Gram stains.

Newly developed flowcharts have been designed to guide you in the detection of fungal elements. Many clues and key details regarding structural characteristics are described that are essential to distinguish fungal elements. The advantages and disadvantages of different staining procedures and the utility of routine bacteriology staining procedures, such as the Gram stain, in the interpretation of microscopic structures are discussed.

Technologists reading Gram-stained smears in routine bacteriology must think about microbiology and not keep focusing on bacteria only. Sometimes Gram smears serve as excellent alternatives to fungal-stained smears such as potassium hydroxide (KOH) or calcofluor white (CW). Sometimes fungi missed or not seen in Gram smears give an indirect notion about the fact that an important fungal species may be involved in the clinical specimen. Therefore, reviewing Gram smears is beneficial as well as confirming the identity of the fungal structure that remains in doubt using CW. When fungi are observed in the Gram-stained smears, they are categorized based on their specific structures, shape, and size. The author has devised flowcharts to simplify different categories of fungal elements seen in direct smear.

The utility of the Gram stain in clinical microbiology may be enhanced by the expansion of its reported detection ability to include yeast and filamentous fungi. Filamentous fungi may not always be readily recognized in the Gram stain, but increased experience and a little imagination make the detection of fungal elements possible.

The bacterial cell is an excellent candidate for the Gram stain procedure. All other cells such as human tissue, parasites, and fungi are technically stained by Gram reagents without meaning anything. Fungi may appear Gram positive or Gram negative, but this reaction does not play role for selecting antifungal agents during treatment.

Clinical specimens sent to microbiology for C&S, fungal, viral, and mycobacterial analysis are also sent to the histopathology for pathological studies. The pathology lab processes clinical specimens using various specialized staining procedures such as GMS, PAS, H&E and other test procedures as necessary. Clinical microbiology, on the other hand, runs simple, rapid, cost-effective, and routine procedures to identify the infectious agents. The majority of times routine microbiology stains are sufficient. Microbiology smears frequently miss organisms as compared to pathology, which seldom comes across such a scenario. Comparatively, pathology slides are superior in contrast and clarity as compared to the routinely stained smears in microbiology due to artifact and reagent deposits. However, the pathology labs often run into problems in terms of identifying structures that they have seen in their GMS or other smears in greater quantity. At this point they seek microbiology’s help for interpretation of the organisms.

The Gram stain is the most commonly used procedure in clinical microbiology for the detection of bacteria from clinical specimens. The Gram stain procedure is not typically considered acceptable to detect FE from clinical specimens. However, it has created a specified niche within direct microscopy to find organisms other than bacteria in Gram-stained smears. One can learn how to examine Gram smears for the detection

There are several medical mycology textbooks that contain a chapter on direct microscopy. However, this textbook is the first of its kind, as it discusses the simple Gram stain procedure as a valuable tool for the detection of fungal elements. This book has been specifically designed for people working in the medical microbiology laboratory with little or no practical experience in medical mycology. The central idea presented in this textbook begins with the Gram stain for the detection of fungi; the most important and more frequently isolated opportunistic and potentially pathogenic fungal species have been included. The book contains more than three hundred color images, the majority of which come from direct smear examination, such as Gram stain and other staining procedures. The mold phase and the microscopic structure of the identified fungal species relating to the initial findings of the direct smear have been linked to avoid bias. When a fungal infection is present but not suspected clinically, the Gram stain may be the only clue to the true cause of the infection. Although there are better methods than the Gram stain for visualization of fungi, these methods are only performed if there is clinical suspicion for fungal disease. Clinicians often send specimens for bacterial culture, but they sometimes overlook requests for fungal culture. During such times, the Gram stain is the only technique available in the clinical microbiology laboratory for direct detection of fungi from these specimens. The presence of fungi should not be overlooked during the direct examination of the clinical specimens for bacteria. This book will guide the reader in the recognition and identification of fungal elements in gram-stained smears, especially when they are distorted and remain unstained and undetectable. This new textbook focuses on the detection and classification of fungal elements in Gram stains. Newly developed flowcharts, clues, and key details regarding structural characteristics have been added to guide the reader in the right direction. Throughout the years, the author has accumulated many scenarios in which fungal elements were not detected on the original Gram stain evaluation but were found to be positive upon review once the culture grew a fungus. Finally, the book contains a chapter with a practice examination including microscopic images representative of scenarios commonly encountered in the clinical microbiology laboratory.

The author, Subhash Kumar Mohan, was born in . He received a graduate degree in integrated medical systems in 1967 and worked in for five years before emigrating to in 1972. He lived briefly in the from 1974 to 1976, working in a laboratory performing bacteriological and chemical analyses of drinking water and studying microbiology at the Isleworth Polytechnic Institution in . Subhash returned to in 1976 to work in a private laboratory and study at the Michener Institute for Medical Technology, completing the Canadian Society for Medical Laboratory Science (CSMLS) national certification exam for registered technologists in clinical microbiology in 1977. Subhash moved to , and joined the Charles Curtis Memorial Hospital (CCMH) in in 1978. He worked at the CCMH for three years, supervising the microbiology department. During his stay at the CCMH, Subhash successfully achieved national certification for registered technologists in immunology in 1980. His first case, “Possible Waterborne Salmonellosis—,” was published in Canada Disease Weekly Report in 1982. Subhash moved back to to work at in late 1981 (the laboratory would later merge with in 2000). He successfully achieved advanced certification in medical microbiology (Advanced Registered Technologist [ART]) from CSMLS in 1988. Subhash has published many articles and abstracts in Canadian and international medical journals. Teaching of the medical technology students, new graduates, staff members, and medical residents is an integral part of his duties in the clinical microbiology laboratory. Subhash has offered live medical mycology workshops, seminars, correspondence courses, and poster presentations across and in the and . After acquiring so much experience on the bench, Subhash had a dream to publish a medical mycology book for clinical microbiology laboratorians. Subhash has taken Hans Gram’s simple stain, which revolutionized the field of bacteriology, into the field of medical mycology for the detection of fungi in the clinical specimens.

The author led the discovery of a new Candida species (Candida subhashii), which he isolated from the peritoneal fluid of a patient with end-stage renal failure. The experts decided to name the isolate in honour of Subhash's extensive work in the field of mycology.