Popes and the Tale of Their Names 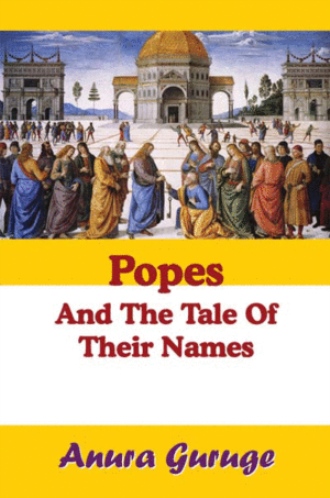 Bartolomeo Alberto (Mauro) Cappellari, a monk in the Benedictine Camaldolese order, was unexpectedly elected pope on February 2, 1831, following a fractious 50-day conclave. In 1805 Mauro had been appointed abbot of Rome’s San Gregorio (St. Gregory) Magno al Celio monastery. St. Gregory I ‘the Great’ (#64) had been a monk there, the monastery having been built on what were the grounds of his ancestral home.

Around 1814, Mauro had become the head of the ‘Congregation for the Propagation of Faith,’ which had been founded in 1622 by Gregory XV (#235). Mauro chose to be Gregory XVI (#255) in honor of these two popes who were associated with significant facets of his earlier life. He is, to date, the last monk to be elected pope. He is also the last who was not a bishop when elected.

The scholarly Enea Silvio Piccolomini, ‘Cardinal of Siena,’ when elected by acclamation in August 1458, chose to be Pius II (#211), because the protagonist in Virgil’s (29-19 BC) epic poem Aeneid describes himself as pius Aeneas – ‘Aeneas’ being the Latin form of his first name [p. 74].

Francesco Todeschini Piccolomini, in 1503, opted to be Pius III (#216), because Pius II was his maternal uncle.

Barnaba Niccolò Maria Luigi (‘Gregorio’) Chiaramonti, born a count, was elected pope, albeit as a compromise candidate, on March 14, 1800, after a 14 week conclave in Venice [Italy]. The prior pope, Pius VI (#251), a family friend, was responsible for his bishopric and cardinalate. In recognition, Gregorio chose to be Pius VII (#252). In 1816, he made Francesco Saverio Castiglioni a cardinal. Thirteen years later, Francesco became the new pope. Intending to continue the traditions of Pius VII, he opted to be Pius VIII (#254). He was the third ‘Pius’ in 54 years – his two successors having reigned for a total of 47 years and 11 months.

Irenaeus’ list states: “…To this Clement there succeeded Evaristus. Alexander followed Evaristus; then, sixth from the apostles, Sixtus was appointed; …”

‘Sixtus,’ considered a variant of ‘Sextus,’ along with ‘Sesto’ and ‘Sixto,’ is a Latin word denoting 6th. It was thus a popular choice of name for a 6th child, albeit not limited exclusively for just that scenario.

The sixth ‘pope’ to succeed St. Peter thus happens to be called ‘the 6th.’ This would appear to be rather propitious, to say the least. Irenaeus, though, appears to have been indifferent to its remarkability. Maybe he knew that it was meant to be as such. To make it even more intriguing, many respected sources, for example, the 1917 ‘Catholic Encyclopedia’, and the ‘Oxford Dictionary of Popes,’ note that ‘Xystus’ is the correct (or older) spelling for ‘Sixtus.’ The 1917 ‘Catholic Encyclopedia’ goes on to even say that the spelling ‘Xystus’ was used to refer to the first three popes now known as Sixtus I (#7), Sixtus II (#24) and Sixtus III (44).

Nonetheless, there is little or no discourse, speculative or otherwise, that the 6th pope to succeed St. Peter may have had a different birth name than that by which he is now known. This Sixtus/Xystus incongruity is explored on page 34. All five of the popes named Sixtus are discussed in chapter IV against the background of a poem written in 1834 by Giuseppe Gioacchino Belli’s that ends with the rebuke: “Because not too soon another pope may have the whim of naming himself Sixtus the Sixth.”

A look at popes and the papacy through the prism of the names associated with the popes -- whether they be birth, priestly, or assumed names. It is the first in-depth exploration of papal names and their meanings with a revised history of papal name changes, a complete account of the rationales for the 125 known instances of assumed names, and a slew of new ‘factoids.’

The first documented instance of papal name change was when Mercurius, in 533 A.D., opted not to introduce the name of a pagan god into the papal rolls. Marcellus II, in 1555, was the last pope, to date, to have retained his prior name, thereby breaking a 494 year tradition . ‘Marcellus’, however, is a name derived from ‘Mars’ – the Roman god of war! The history of papal name changes contains many such intriguing twists and turns, in particular Anacletus, Sixtus I, Zephryrinus and Julis II. This book sets out to highlight them all and thereby plug a hitherto little explored aspect of papal history.

Despite the interest in papal names, there has been very little dedicated analysis pertaining to their evolution. Consequently, there are many inaccuracies and omissions. Papal name change could be a much older practice than originally believed. This book is an attempt to rectify the lack of attention hitherto afforded to the story and the glory of papal names. It is a by-product of a computer-aided papal history project undertaken by the author. Web  site.

This book is not meant to be controversial. The subject matter, though often beguiling, still does not, however, provide sufficient scope to incite bona fide dissension. This book is meant to enlighten, and hopefully entertain. With it, the author hopes to put a stake in the ground vis-à-vis our understanding of papal names.

Anura Guruge was born in Ceylon, came of age in Britain (an Anglophile to the core), and has lived in the U.S. since 1985. For over 30 years he tried to make a living in the computer industry and was employed by the likes of IBM, Wang and BBN. Due to a genetic disposition, writing, however, is his weakness. He wrote his first book in 1983, 500 pages in longhand, in pencil, distrusting early PCs and too inept to use a typewriter. It was about a networking architecture, now long obsolete. The book, nonetheless, is still sold on the Internet. Since then, he has written four other dense books on technology and upwards of 350 published articles.

Sometimes when the planets are propitiously aligned, he produces graphic marketing collateral for select clients and creates image-laden Web sites.

He does have a sporadically updated Web site at: http://www.guruge.com/. Spammers are well aware of his e-mail. But his ISP does a grand job blocking spam as well as legit e-mails. So, he has no problem bandying his e-mail: anu@wownh.com. The ‘wownh’ comes from ‘Waiters on Water’ a boat-based meal delivery service.

His first name means a ‘guiding light’ while ‘Guruge’ stands for ‘from the house of the teacher.’ Both his parents were teachers. But he is not sure whether he has ever lived up to this name.

His mother, and since then quite a few others, refer to him as ‘Anu.’ In his 30s, he discovered that the Babylonians paid homage to an ‘Anu.’ His mother is unlikely to have known that. He has never had any desire to change any of his names.