Author of the Gust

Book One of the Antelope 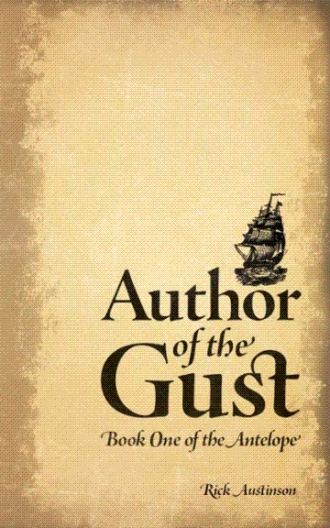 Every great journey and adventure that has ever been undertaken throughout all the histories has always shared one key thing in common: each began with a single step. But for some, it wasn’t always a ‘step’ in the conventional sense. Ryo landed headlong with a splash in the muddy drainage ditch beside the road She should have seen that coming. Bits of green and brown moss clung to her face and foul-smelling grayish-brown water ran down her neck as she picked herself up and tossed back her single, long, black braid. Another day, another wonderful adventure in being knocked in a puddle. The proud city of Ninpou was often called the City of Rain, because it rained there more often than anywhere in the whole of the empire. About four times a week, on average, except during the rainy season when it happened several times a day, and during the winter when it was dark for four solid weeks and snowed. This meant of course that the city never lacked water, and older children never lacked puddles to shove Ryo into. She stood, and with one stroke of her hand, whipped the muck off her face and glared at her opponent. Her dark green eyes were unblinking, unwavering, as she stared down her enemy. Ryo had eyes like a falcon, her mother always said, and her stare could even make grown men… laugh hysterically. There is unfortunately nothing imposing about a little girl standing in a puddle, soaked to the bone and covered from head to toe in mud. Without breaking her gaze, Ryo stepped out of the low ditch and onto the heather, where her enemy had drawn a knife. He was an older boy, about a head taller and very muscled. But muscles were slow, awkward, and not very useful unless you had good armor to cover them. “Why do I even bother to waste my time with you?” he snarled. “Why do I even TOUCH you?!” “Because you’re a coward,” Ryo replied simply. “Who attacks from behind. Can we say ‘honor’? It’s easy, hon-or, now you try.” Without another word, the boy leaned forward and lunged at Ryo with the knife. Ryo caught his wrist with one hand, ducked low, and with a smooth, fluid motion, used the boy’s momentum to catapult him over her shoulder. He landed on the heather behind her and rolled to his feet, but Ryo had already turned around. Casually, almost conversationally, she reached behind her back and drew a short, hand carved wooden training knife from her belt. “No, like this—Cut! Cut! Cut! DISARM! CUT!” Ryo released the older boy’s arm and retrieved his razor sharp tanto from where it had fallen in the heather. For a moment she caught the reflection of the late morning sun high overhead in the glistening blade of the fine weapon. She bounced the rays expertly into his eyes and grinned mockingly. Then, as the older boy reached to grab it from her hand, Ryo tossed the weapon up, giving it just enough spin to flip end over end three times, and land perfectly balanced on her out stretched pointer finger, digging in far enough to raise one crimson drop of blood that also caught the glint of the sun’s rays. Ryo once more flicked the weapon up and caught it by the blade, then threw it into the ground at the boy’s feet. Her own wooden practice tanto hadn’t left a single mark as it passed thrice across his arm and once more across his neck, but she was quite sure it had cut deeper into his ego than any blade could. Ryo smeared the drop of blood under her right eye, leaving behind a dark crimson tear drop. She shifted back on her right leg and took a strong stance, retrieving the little wooden practice knife from her belt. “Now,” she began quietly. “Would you like to try again?”

It is society’s nature to divide itself into many tiers. No matter how you arrange them, one tier always has to be on the bottom. On that tier is Ryo Sansen. Ryo is an outcast, an invisible in her society, and for no reason beyond the fact that she had the audacity to be born. So, what is a young ninja-girl to do in her position? Why, change the world, of course.