A return to the past to discover my destiny 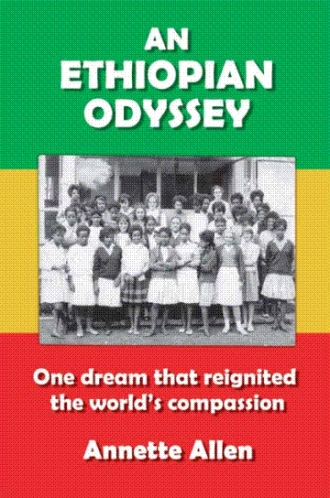 July 1997:  Annette Allen was suicidal.  A large business loan meant the loss of her lovely home, devastating the family.  The pills bought, the date set, she cried herself to sleep hoping Rob, her husband and young son, James, would soon forget her. Then a strange dream appeared, which would transform her life.

Dreams had always been the way God spoke to her, since Annette was little.  But now it was time to honour the forgotten covenant she’d made two years earlier.  In April 2000, another dream showed the path: she must return to her childhood home in Ethiopia, to help provide water.  This time Annette was ready for the magical quest, prepared to risk everything and willing to wait for the signs.  But would others believe the dream?

At a time of great fear, where religion is condemned and so many faithful have lost trust in a loving God, can showing compassion to others bring you closer to Him, and reveal how interconnected we are?

“Thank you for sharing your dream with me.  I read about it with great interest and wish you well with ‘An Ethiopian Odyssey’.”

“I very much admire your determination and commitment to the cause of poverty reduction.  I hope that others are inspired by reading about your experiences.”

"This is a moving story that carries with it an important message to humanity. I wish you well in your efforts to bring clean water to Ethiopia."

Annette  Allen is half-English, half-Norwegian and spent much of her childhood living out of suitcases, as the family travelled from place to place, following her father’s aeronautical career.  Most of her childhood was spent in :  and .  When she witnessed the endemic poverty in these countries, she developed a strong sense of justice for these people, who had so little, and yet were often happier than we were, with all our material possessions.  Her simple, Christian faith grew from such encounters.

After returning to in the early 1970’s, she moved into corporate communications, working for major international companies.  But  as she approached 40, life began to seem increasingly meaningless.

Everything changed in 1992, when she stopped work to care for her terminally ill mother.  Planning ahead was futile: every day was precious.  Annette began to question what life was really all about.  Then, the still, clear dreams she'd had since she was a teenager returned. She began to wonder if these, perhaps, foretold her future.

“An Ethiopian Odyssey”,  is about her quest to find nine classmates from her schooldays in in1964, prompted by another dream in April 2000: she’d returned there to help provide water.  This time she was ready to risk everything in pursuit of it.

It touched  people right around the world, who stepped forward to help find the missing women. The dream spread everywhere, through the internet, newspapers, and radio programmes.

The journey ends in February 2005, at St. Paul’s Chapel, the little church of such peace beside Ground Zero, New York, the city where two of her classmates now live.  Most of all, she'd learnt to trust in God's infinite love for us and that dreams still come true