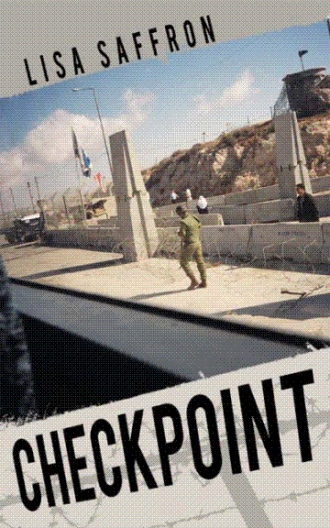 Boring. Boring. Boring. A year in the army and I end up at the most boring checkpoint ever. I want action, excitement, a hit of adrenalin. That’s what I was trained for. But no, the only action at this checkpoint is up with the clouds. Hey, I take that back. Today even the clouds are boring. They hide the sky in a half-hearted kind of way, like they can’t be bothered. Everywhere I look, there are places where the clouds get hazy and vague at the edges and the blue pokes through.

I’m not on my own in this deserted, bleak checkpoint. There’s a girl with me. She’s pretty or would be if she smiled once in a while. We’d never met before we got here even though we grew up less than 20 miles apart. We’re gradually getting acquainted. There’s no choice really. Most of the time, it’s just the two of us here, stuck together like Siamese twins. You can’t choose your mates when you’re in the army.

Our first meeting was wild, explosive. We fought a lot. She was expecting a different posting and took it out on me. As if it were my fault we were here. She drove me crazy with her yelling and blaming and having to be right all the time. I had enough arguing from my kid sister, Orli. The best thing about going into the army was getting away from Orli and all that arguing. So I was really fed up to find myself with another argumentative girl.

We stopped arguing after a few weeks. Maybe it was only a few days. I can’t keep track of the time. Now she hardly says a word. Most of the time, we lie on the hard, dusty concrete pathway and watch the clouds in silence.

At first, I felt relieved. I got into cloud watching too. Spent ages following clouds through their manoeuvres. I tried not to pay any attention to her. But it’s kind of hard to ignore someone lying right next to you who’s sending out hostile vibes. I can’t stand the silence. I’d rather be arguing than not talking at all.

She grunts. I wonder if she’s as bored as me. We watch the clouds peel back from the blue patch, exposing more naked sky.

I remember the first time I flew in an airplane and saw clouds from above. I was seven years old. The tops of the clouds were so utterly amazing that tears came into my eyes. They were secret tears so my mom and little sister didn’t see. If my dad had been with us, he would have smacked me on the back of my head. He hated it when any of us cried, especially my mom. I wanted the window seat all to myself so I could look at the clouds. But Orli kicked up a fuss, screaming and crying. She was four. She always got her way by screaming. Mom made us take turns in the window seat. When it was Orli’s turn, she didn’t even look out the window. She only wanted to sit there because I wanted it. I was so angry I sulked most of the way from to .

More about the book - click here to go to my blog. On the 2nd of October 2002, the Shapiro family’s comfortable life in an Israeli suburb is shattered by a tragedy that sets each member on a journey of self-discovery. Easy-going Yigal, a corporal in the Israeli Defence Force, forms an unexpected alliance with Aisha, a fiery Palestinian teenager while Yigal’s unquestioning mother, Ruth, reconnects with her estranged friend, Vivi, who passionately supports the Palestinian cause. David, Yigal’s father, deepens his relationship with zealous settlers in the occupied West Bank and Orli, Yigal’s younger sister, makes a decision about military service. Checkpoint is the story of ordinary people living in a conflict zone, each struggling to make sense of a situation where it’s not clear who is the victim and who is the terrorist.