I Take My Pen in Hand 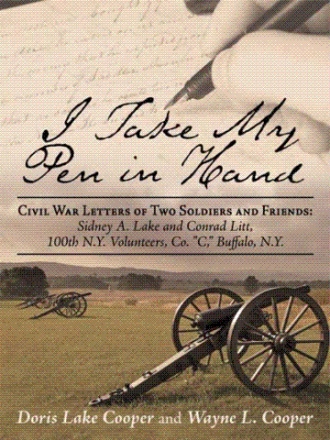 "We left Washington on 16, June with a ship and had food for 2 days with us.  As we got into the Sea (Chesapeake) the wind was so strong that the ship had to drop anker for 2 days close to shore.  I and a few others went with a row boat on land and there we shot 7 sheep, the next day others went on land and brought back chickens and ducks."___Conrad Litt, end of June, Fair Oaks, VA

"The 54 Mass. was here in the charge and their loss was fearful.  They planted their colors on the parapet and A reb. grabbed the flag and tried to take it away and did get the flag but the Negro stuck to the staff and they tore the flag off.  The Negro came back with the staff crying."____Sidney A. Lake, July 27, 1863, Morris Island, SC

"I can't hear anything from Con (Conrad Litt) they all say they saw him fall, say he was hit in the breast and was killed instantly."____Sidney A. Lake, July 27, 1863, Morris Island, SC

"It is reported here this morning that one of our ammunition boats blew up accidentally." City Point, Virginia___Sidney A. Lake, August 10, 1864, Deep Bottom, VA

"I Take My Pen in Hand" is a collection of Civil War letters written by Sidney A. Lake and Conrad Litt, farm boys and friends from Pembroke, N.Y. These two men  served with the 100th N.Y. Volunteer Infantry, 'Eagle Brigade.'  Conrad's letters describe the establishment of the regiment in 1862 and several battles, including the Battle of Fair Oaks.  The 100th Regiment was in the first charge on Ft. Wagner with other regiments including the 54th Massachusetts (the first Negro regiment). Conrad Litt was killed in this charge on  July 18, 1863 at Morris Island, South Carolina.

The letters of Sidney Lake tell of Conrad's death and describe the Battle of Ft. Wagner as well as other major battles. Sidney was discharged in 1865.  Sidney's letters tell of events at Ft. Sumter, Bermuda Hundred, tunneling the mine at Petersburg, Virginia and the explosion at City Point, Virginia.

With the addition of 88 descriptive images: which include photographs as well as official records and reports, these letters come alive as we relive this time in history.

Doris Lake Cooper is a native of Oklahoma, graduating with a Degree in Education from Northeastern State University in Oklahoma.  Her career path has been devoted to the areas of education and marketing.  "I Take My Pen in Hand" is the fulfillment of a life long dream to publish the Civil War letters of her great-grandfather, Sidney A. Lake.

Wayne L. Cooper, also a native of Oklahoma is a veteran of the Korean War.  His career was with the US Corps of Engineers in hydropower.  Wayne has pursued his interest in the Civil War through research and the collectiion of Civil War artifacts.  He has verified the events written by Sidney Lake and Conrad Litt in their letters and this information has been incorporated into the book.

To my great sorrow, Wayne never got the opportunity to see this book in print.  Wayne died September 27, 2007 following a long battle with heart disease.