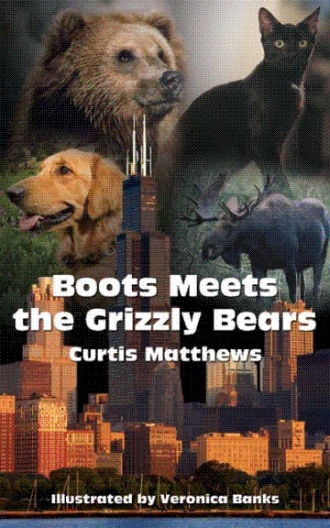 “Eh Marshal, try to get Boots into a harness!” yelled Duck. “We need to try and set Emmilyn down easy! It’s going to be close!”

Marshal could barely hear Duck Chambers holler over the commotion. It was sleeting so hard that he felt as if he were in the middle of a cotton candy machine at the Texas State Fair. The single engine float plane, known as the DHC-2 DeHavilland Beaver, was heaving to and fro through the sleet and snow. It sounded like every bolt holding her together was rattling right out of its nut. The nor’easter, as they call it in Northern Ontario, had blown in so fast that Duck hadn’t had time to prepare for a landing. The ceiling dropped so dramatically that Duck wasn’t sure where the tree line started or where it ended. He could barely see the nose of the plane as he peered out into the darkness. Except for the sleet and snow and the lights on the plane, it was pitch black.

Suddenly, Emmilyn dropped ferociously. The little float plane jolted and lost more than twelve feet in altitude. Marshal launched head first through the air as he was trying to harness Boots, slamming into the ceiling of the Beaver. His forehead split open with a three inch gash and blood spurted all over the seat and down the front of his oversized parka. He looked up at Boots in a daze and grabbed a strap which was dangling from a u-bolt holding supplies down tight. At least it was tight when they took off for Pickle Lake, their destination earlier that afternoon.

Boots was doing his best “Ron Jon surfer” imitation while standing up in the rear passenger seat. He had managed to re-gain his footing after the sudden drop in altitude. He looked up at Duck and then over at Marshal. He barked at Duck.

Startled, Duck glared back toward Boots.

Immediately as Duck looked over his shoulder back at Boots, the Beaver lunged hard to its left and Duck lost control of the wheel. The float plane was shaking violently and lunged brutally left and then right. It looked as if Emmilyn was a puppet and the puppet master had fallen asleep at the job. Duck grabbed the wheel and tried to straighten her out. He peered through the cockpit window and right in front of him stood the top of a lone Poplar tree with bright yellow leaves. The Beaver raced forward while its under belly clipped the tree and jolted quickly to its right.

Duck wasn’t even sure if he was over water or land, but he had few options. He couldn’t control Emmilyn any longer. He peered over the steering column and took a chance. Jamming the throttle full tilt, he pushed Emmilyn as fast as she could go and turned the wheel hard and down toward the passenger seat floorboard. He was guessing which direction to turn, but he really didn’t have much choice. He couldn’t see four feet in front of him and the little plane wasn’t going to make it much farther regardless of what he did.

A huge Blue Spruce tree suddenly whacked the rudder and knocked the controls out of Duck’s hands again. He grabbed the controls and righted Emmilyn, pushing her faster and faster down into the darkness. In the blink of an eye, Emmilyn slammed into the black and icy water. Her wing hit the white caps with a ferocious thud and Marshal slammed into the back of Duck’s seat. Boots went sailing through the cockpit and landed cruelly into the seat next to Duck. Duck lurched the little plane to the left and pulled back on the throttle. Emmilyn bounced high back into the darkness and almost flipped herself propeller end first, attempting a makeshift somersault.

Emmilyn’s wing clipped a gigantic slab of northern granite. The stone was as tall as a basketball hoop, and as wide as a half-ton pickup. Emmilyn whipped around ferociously as if she were on a pinwheel and swooped in with brutal force, smacking into a group of spruce trees nestled close to shore.

The little float plane finally came to a stop. Duck Chambers was slumped over in the cockpit with blood all over his face, his nose and his parka. A tree had lodged itself through the front window and had pinned Duck back against his seat. Wet, sticky pine needles were everywhere.

Installment II of the Boots Adventure Series, Boots Meets the Grizzly Bears, arrives at your local bookseller Fall 2007.  Marshal, Boots, , and Earl win a Northern Ontario, Canada fishing trip.  But first, their trip takes them to , where they encounter a Black Cat named Amore’, a swarm of rats, and a celebrity.

Boots Meets the Grizzly Bears is Curtis’ second installment in the Boots Adventure Series.  His initial and primary career was that of a computer and software services entrepreneur.  He received an MBA in management from , and was the CEO of an based internet services company.

His passions include his three children, his wife, and their menagerie of animals.  An avid outdoorsman, Curtis enjoys golf, bird watching, hunting, and fishing.  After moving to from in 1993, Curtis began spending time in rural and .  Because of his generous and benevolent in-laws, he has been the fortunate benefactor of a section (640 acres) of farmland just outside , .  This and future adventure stories are loosely based on personal accounts while spending time outdoors with family and friends.

Significant proceeds from all his book sales will indeed be donated to either education or animal related causes.