Blood of a Stranger 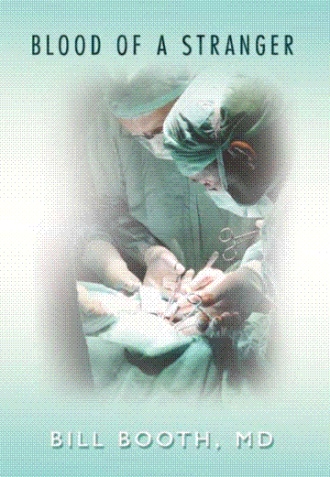 At the sound of a loud crack of thunder, Brent spun around and saw the western part of the sky covered with a solid bank of black thunderclouds. The blackness moved steady as a freight train in his direction, a dense line of solid rain on the leading edge.

Leaping to his feet, Brent took over the steering and spun the boat dead into the wind, started the engine, and re-engaged the autopilot. Then, sails luffing with a sound like cracking thunder, he released the jib sheet to allow the big genoa up front to be roller-furled back onto the forestay, but it wouldn’t furl. He pulled several times on the furling line, but it was caught on a deck cleat forward of the mast and held the sail in place.

Cursing under his breath, he abandoned the genoa and scrambled onto the deck to release the main halyard then pulled the huge mainsail down. The sail flapped and beat him like a mad dragon as he struggled with it, but he soon had it subdued with a couple of ties.

Large drops of rain began to pelt him, and the wind gusted so strongly Brent had difficulty staying on his feet. The genoa popped like a bullwhip as he struggled forward to free the trapped line. Waves crashed over the plunging bow and washed down the deck, making it ever more difficult to stay upright.

After what seemed an eternity, Brent reached the fouled line and freed it then turned to fight his way back down the slick, pitching deck toward the cockpit. Wind screamed through the rigging, and rain mixed with sleet poured down in heavy sheets.

Clinging to lifelines along the outside edge of the deck, Brent inched toward the shelter of the cockpit. The bow behind him pitched and tossed like a wild horse and sleet coated the wet deck, making it more difficult by the second to stay on his feet.

Then, in one split second, it happened. The boat plunged downward just as Brent lifted his foot to take a step. A strong gust of wind hit him full force when he had only one foot planted on the slick deck. The next moment, he hung over the side, clinging with all his strength to the bottom of a stanchion, a small, upright stainless steel post at the edge of the deck. Both legs dragged in the water alongside the wild boat. The loose genoa cracked furiously over him in the driving wind.

Dr. Brent Dalton’s professional and private lives spiral downward when he tests positive for HIV following an accident in the operating room. In rapid sequence, is sued by a former patient who alleges he infected her with the virus, his hospital privileges are taken away, patient referrals disappear, and he is compelled to close his office and surgical practice. Finally, he begins to have marital problems.

Convinced he is not responsible for his patient’s infection, hires an attorney and a private investigator to work on his behalf. Then, despondent, he leaves on a solo sailing trip and almost dies when he is swept overboard in a sudden squall.

Following his near-death experience, finds a renewed enthusiasm for life and turns the tables against his oppressors after an enlightening discovery.

Dr. Bill Booth is a graduate of LSU School of Medicine in , where he also trained in general surgery. School and residency training were interrupted by a two year tour of duty in the Navy which included a year aboard the hospital ship USS Sanctuary in .

Following residency training, Dr. Booth practiced general surgery first in a rural community in southeastern , then in , where he retired in 2001.

Bill and Cherry, his wife of 45 years, have four adult children and five grandchildren. They now live in the mountains of north where he writes, ties flies, and plays golf. He practices medicine part-time at a free clinic in .