I Coulda Been a Cowboy but My Boots Didn't Fit 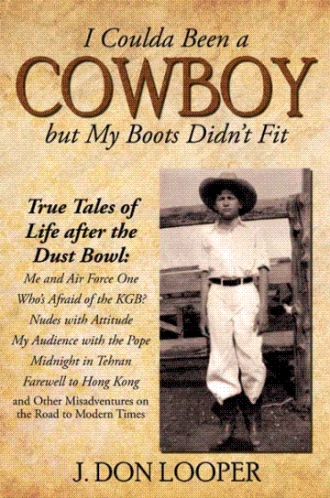 Even more attractive to me was the fact I wouldn't have much work to do, and I could enjoy the ambience. I would take in the ceremonies, mingle with presidents and prime ministers, but have no official statements or press conferences to worry about. Then a two-day courtesy call in Japan, our biggest export customer for farm products, and we'd be off for home.

That would be much different from other foreign trips I had taken with Secretary Butz, which seemed always to be strenuous and pressure-laden. Butz was a hard worker himself, and I followed his lead. But this trip would be different, more glamour than grind.

Dave Hume was another of my old travel companions. I had met him five years earlier in London where he was agricultural attache at the American Embassy. He later held the same position at our embassy in Tokyo, and was now the top boss over foreign programs in the Agriculture Department. He was a tall outgoing man whose casual and fun-loving air belied the competence of a career officer with long experience in diplomacy.

Chiang's funeral appealed to my sense of history. The other Allied leaders from World War II were all dead -- Roosevelt, Churchill, Stalin, de Gaulle, even Truman. Chiang was the last. The Generalissimo had personified China's resistance to the Japanese and then to the Chinese communists. He and his wife, her relatives and in-laws, had run Nationalist China like a family business.

As it turned out, we did not go. We did not go to Chiang's funeral. Which might make this a non-story, until you consider the reason for our change in plans. Unknown to us, our weekend mission was caught up in an old web of politics going back to the China Lobby organized during World War II to generate Washington money and influence on behalf of Nationalist China. Madame Chiang, attractive, politically savvy, the China Lobby’s madonna, slept in the White House and WE paid HER.

We were to fly out of Andrews Air Force Base on Saturday afternoon. Five hours before I was to leave my home in a Maryland suburb, Dave Hume called.

"Don, are you all packed for Taipei?" he asked.
"Just getting started," I replied.

"Well don't bother. The trip is off."
"We're not going?" I responded. "Isn't anyone going? To represent the ?”

“Rockefeller didn’t want to go. He had gone to his farm in New York for the weekend and didn’t want to change his plans. He has agreed to go to Taipei now but only after the Taiwan Chinese complained that an American secretary of agriculture doesn’t carry enough rank.”

So that was it. Taiwan partisans had protested that a cabinet officer –- an agriculture secretary -- was not high enough in position to represent China's great wartime ally at Chiang's funeral. The U.S. was not giving sufficient respect to the Generalissimo's memory or to his country. Nelson Rockefeller had the rank, but the last thing he wanted to do was interrupt his weekend for a funeral on the other side of the world. But now he was going anyway.

Taiwan officials in Washington told Secretary Butz later that it was not their doing. Their government had not opposed Butz. The Secretary didn’t believe that, and for years I wondered if Madame Chiang herself might not have had a delicate hand in the matter.  It was not until 2006 that I got my answer, in a new book by Laura Tyson Li entitled “Madame Chiang Kai-Shek: China’s Eternal First Lady.” Ms. Li writes that the Madame knew nothing of the decision to replace Butz at her husband’s funeral. It was the intervention of Anna Chennault, widow of Claire Chennault of Flying Tigers fame in World War II.

Anna Chennault was more than your t

These 76 memoirs follow one of Washington's most enduring and well-traveled ghost writers through 60 countries and "what seemed like a thousand years of change." J. Don Looper begins his story in the early 1920's, a time he says had more in common with the Middle Ages than with the world we live in now. He draws on a Dust Bowl childhood and personal adventures in journalism and public affairs to illustrate "the rush to modern times" that began in the 20's. Many essays stem from cabinet-level missions abroad and staff writing for top officials in eight presidencies.

Looper's early years in Oklahoma are reflected in such memories as "Born on the Old Chisholm Trail" and "Life, Death, and the Jackass Farm." A life in the arts and the media is described in "Nudes with Attitude" and "Whatever Became of Type Lice?" Years of overseas travel culminated in such essays as "Me and Air Force One" and "My Audience with the Pope." Topical issues come to life in "Midnight in Tehran: and "Farewell to Hong Kong." Some of the book's characters still make news -- Bob Dole and Henry Kissinger for example. Others are gone -- Richard Nixon, Hubert Humphrey, and Richard Helms. But the  book is also peopled with lesser-known characters who made their own mark on modern times.
The oversize boots in this story were real and memorable, but the author sees them as something more, a metaphor for "movin' on" after the Great Depression. Like the boots, the place and time were ill-fitting for him and some others of his generation. The author moved on to new lives in Washington, Milwaukee, Key West, and the world at large. The title of the book asserts that theme: "I Coulda Been a Cowboy but My Boots Didn't Fit."

"It was like riding shotgun," J. Don Looper says, "I was the guy on the other seat hoping the Indians did not attack and the Wells Fargo box arrived unplundered." Looper is author of a new book of memoirs, "I Coulda Been a Cowboy but My Boots Didn't Fit," which recalls a career riding alongside great events and people as ghost writer, media foil, and troubleshooter. He left a Dust Bowl childhood for a life in journalism, public affairs, and international politics. He traveled in 60 countries and wrote for newspapers as far away as Hong Kong.

When Henry Kissinger called a World Food Conference to  confront a global hunger panic in 1974, Looper went to Rome as a U.S. delegate. When Jimmy Carter restored diplomatic relations with China, Looper was assigned to Beijing for the first U.S. trade show. When Ronald Reagan okayed a second grain deal with the Russians in 1982, Looper went to London to handle the media crush. He accompanied more than a dozen V.I.P missions abroad and sat with foreign leaders as distant as President Marcos in Manila and Premier Kosygin in the Kremlin. He wrote speeches for top officials in every administration from Truman to Reagan.
Looper is a native Oklahoman, son of a cattle trader and auction operator. He completed journalism degrees at Oklahoma State University and advanced studies in international politics at The American University in Washington. He wrote for Oklahoma newspapers, the Sioux City stockyards, a Milwaukee advertising agency, and the U.S. Department of Agriculture. He worked as a Washington consultant and as Washington correspondent for the South China Morning Post (Hong Kong). He was for 13 years public information director for USDA's Foreign Agricultural Service. He now free-lances near Tampa FL, where he lives with his wife, Pat.