Leadership is a Covenant 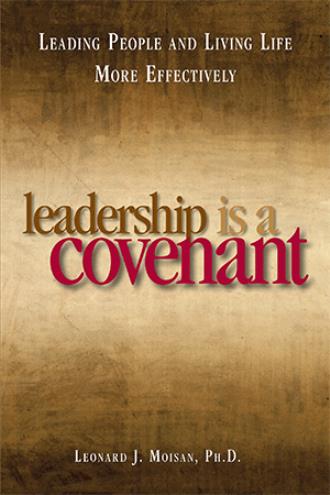 I believe that we hear and read so much about leadership because we are in the midst of a leadership crisis. This crisis is not limited to business or political realms. It is evident in our homes, our colleges, our communities and even our places of worship. Simply stated, people are deeply interested in leadership because they long for it but rarely see it. And when they do experience leadership at its best, it inspires them to follow. Yet, if leadership is really that rare, then what do we call the many organizational heads we normally refer to as leaders? Some, like James MacGregor Burns, call them power wielders. Others, such as Peter Drucker, refer to them as managers and in some cases even misleaders. The point is, whatever we call them; there is a big difference between being the head of an organization and being a leader. Ultimately, true leaders are known not only by what they accomplish, but also by how they accomplish it and how they influence people in the process. In fact, leadership is far more about relationships, influence and methods than it is about achievement. Certainly achievement is a by-product of leadership, but a resume is a poor tool to use if you want to capture the true essence of leadership. It simply cannot be found in the results of a performance contract, increases in profit margins or growth in share price. Rather, it resides in the dynamics of relationships between leaders and followers. It is found when leaders and followers relate to each other in ways that go beyond basic contractual obligations. Certainly contracts help facilitate achievement by defining the legal parameters, performance expectations and working conditions of a given relationship. But contracts cannot motivate or inspire followers, nor can they facilitate their growth. Those are the responsibilities of a leader, responsibilities that extend well beyond the basic requirements of a contract. In just about any field imaginable relationships are the key to success. The best teachers forge strong relationships with their students; the best singers and actors connect emotionally with their audiences; the best coaches bond with their players; the best sales people relate well with their customers and the best leaders identify with and engage their followers. More than one expert has pointed out that during the Kennedy-Nixon debates, John F. Kennedy may have actually lost the debates on substance. Yet, President Kennedy was an overwhelming success and actually went on to win the election because he was able to connect with the American people. This president certainly was not without his flaws, and history has revealed that his tenure in the White House clearly had its problems. But as a leader, President Kennedy identified with his followers, and they identified with him and, as a result, they were willing to follow him. Like President Kennedy, effective leaders are able to connect with and engage followers emotionally in relationships. Through those relationships, they pursue common purposes and achieve common goals that are larger than those of any one individual. In so doing, leaders are also able to provide meaning and hope for followers in ways that create high levels of synergy, productivity and fulfillment. At its core then, leadership is a relationship in which leaders and followers are connected and emotionally engaged in pursuit of common purposes. It is much more complex than a simple contract. Instead, leadership is a covenant between leaders and followers and the organizations they serve. That covenant binds them together in a common quest and enables them to achieve far more than they everwould on their own.

In Leadership is a Covenant Len Moisan brings new meaning to the concept of leadership by demonstrating how the principles and power of covenants, properly applied, can increase engagement, improve productivity, create prosperity and transform people and organizations for the better. We used to do business in America on a handshake because we trusted one another. Now we look with more frequency to sue people if they offend us or to control them with regulation and the law. As a result of this rise in legalism, trust in our society has declined. Whether it’s in a family, a church or a multinational corporation, leadership in any kind of organization has become much more challenging. The author argues that one key reason for the increased challenges leaders face is the fact that we have lost an understanding of the concept, the language and the principles of covenant. Combining his experience as a consultant to businesses and nonprofit organizations and his research as an academician, Len Moisan makes the case that the essence of leadership is found in the dynamics of the relationships between leaders and followers. The book is divided in two sections that include Defining Leadership as a Covenant and Understanding and Leading by the Principles of Covenant. In the conclusion Dr. Moisan also provides a brief overview of a four step process for initiating and maintaining covenants. He argues that covenants have always been central to the strength of America. In fact, Alexis de Tocqueville observed in the 1830’s what he called “covenants” that existed between the American people. Through a combination of dynamic and engaging interviews, the latest research and plenty of illustrations and examples; the author shows how, at its core, leadership is a covenant and that restoring covenants is the key to leading effectively in our personal lives, our homes and the organizations we serve. It gives readers the language and imagery both for understanding the concept of covenant and then applying the principles to transform their personal and organizational relationships for the better.

Len Moisan grew up in an Irish and Italian enclave in the inner city of Chicago’s south side. The product of a large, single parent family, he learned at an early age the importance of what people in the city called, “being connected”. Now after 20 years of formal study and two successful careers, one as an educator and the other as an entrepreneur and consultant, Dr. Moisan shares the leadership lessons he has learned. Leadership is a Covenant he makes the case that the essence of leadership is found in the dynamics of the relationships between leaders and followers. Len is the Founder and President of The Covenant Group, a private consulting firm in Kentucky that helps businesses and non-profit organizations apply the principles of covenant in ways that enable them to build success that lasts. Since its inception, The Covenant Group and its associates have helped hundreds of business and non profit clients enhance employee satisfaction, improve worker productivity and increase organizational revenues and profitability. His long list of clients includes UPS where for more than 15 years he has trained over 5000 mid and senior level executives and pilots in the leadership principles of covenant. Throughout his career Len has served as a teacher, coach, college professor and administrator, corporate trainer, business owner and consultant. He brings new meaning to the concept of leadership by demonstrating how the principles and power of covenants, properly applied, can increase engagement, improve productivity, create prosperity and transform people and organizations for the better. Many of Dr. Moisan’s leadership insights come from a “street smart” understanding of people that he acquired growing up in the inner city. Of course, that understanding has also been refined by education and informed by his personal experience of the power of covenants. Len received his B.A. degree in English and Master’s degree in counseling from Illinois University. He also received an Ed.S degree from Lynchburg and a Ph.D. from the University of Virginia with a major emphasis in leadership studies.Len and his wife Gigi have three children and live in Louisville.