Let Not The Left

(Fifth Episode of Enemies of Society) 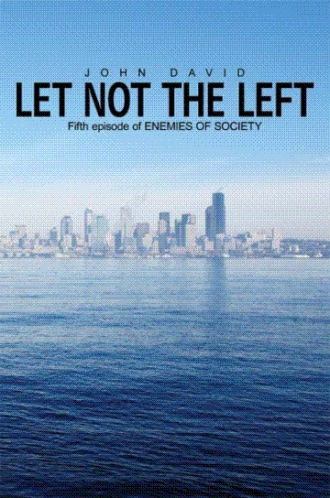 “Truth be with you, Galaxy!  Welcome to War Report.

“This is your host, Randall Scott, reporting one year to the day since War began between the Federation of Independent Planets and the Empire.

“One year ago to the day our Galaxy changed forever.  On this edition of War Report we analyse the achievements, or lack of achievements, during what commentators are calling the Phoney War.

“But has it truly been a Phoney War?  Or just a different type of war?  Watch and listen to War Report, and learn.

“Remember, the Mission of War Report is to inform.”

It was a beautiful night.  Still, quiet - just enough moonlight.

Just enough to make the vast forests and mountains look romantic and mysterious to the occupants of the aircar, instead of alien and impenetrable.  To make the flight the perfect end to a fun evening.

John and Ben Spender had spent an evening at the Lakeside Experience Club, in the continent's primary conurbation of Madison City.  A fave youth-haunt for locals - or outlanders prosperous enough to own aircars - on the sparsely populated northern continent of the planet Vermissa.

The Spender family was prosperous.  They owned a food and timber farm carved from some of the best land on the planet.  Best but remotest - almost diametrically opposite both geostationary space station and prime conurbations.

The brothers were accustomed to long flights, but Ben was young enough to still be excited by late-night travel - particularly to Lakeside.  The sixteen-year-old had not long been allowed to accompany his nineteen-year-old brother John, so Ben was still peering out the windows, despite the fact that it was past midnight.

John, meanwhile, was studiously trying to live up to his chosen image of seen-it-all elder brother - and watching Gamma Sector chartmusic over the aircar's quality s&v receptors.  Therefore, it was John who saw the music screenblank, to be replaced by images of what looked like Greenie Leviathans.

First thought: system malfunction.  Clicked a classic movie channel?  Accessed own vidbank?  Ben suggested both even as John rebooted.  Their theory got endorsement when the channel abruptly blizzarded with static, then blanked.

Then they discovered that all channels were down.  The system was receiving zero.  Good cause to guess system-crash.

But vidbank and datastore still functioned.

But both wrist-comlinks had the same dysfunction.