For The Sake of My Country 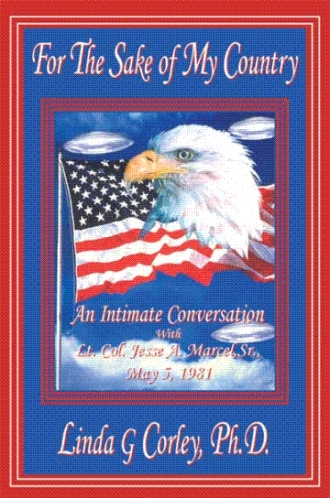 At an early age, I started my own serious study of the paranormal never knowing that later in life I would actually meet individuals who claimed to have had close encounters of the second, third, and fourth kind.

As a young teenage mother and housewife in the 1960s, I began reading books that were not ordinarily in my home library. I became engrossed in books that spoke of UFOs, cryonics, cloning, ESP, telepathy, clairvoyance, hypnosis, reincarnation, telekinesis, and other enigma and mysteries. I spent years reading about parapsychology even before it was recognized in 1969 by the American Association for the Advancement of Science.

I had an intense interest in becoming a Parapsychologist when I read about the work of Dr. Thelma Moss in California. How I longed to be able to study these fascinating subjects. However, there were no Universities near me that offered anything even close to this subject matter. So this passion was placed on the back burner and I discontinued my quest for knowledge on the subject and went on with my life. For approximately 10 years it appeared that I had lost interest in the study of the paranormal. I began traveling around the country and lived much of my life as a gypsy.

Then in the late 70s, while sitting on the banks of a Texas bayou fishing for food for my supper, I had an epiphany and the sudden urge to go home. Home to Louisiana. I was determined to change the course of my life and eventually enrolled in college. And of course, I majored in Psychology as this was the closest I could get to my true interests.

However, it was not until the book The Roswell Incident hit the stands that I decided to rekindle my love for books on the paranormal. In the spring of 1981, I checked this book out of the local library and once again my interest grew. I wondered how I would combine my studies of psychology with parapsychology. Then an idea suddenly came to me.

As a course assignment, I decided to interview interesting people and write reports to hand in as part of my academic requirements in Psychology. I immediately thought of the individual named in The Roswell Incident who just happened to live in my home town. I placed a call to the person named in the book, a Maj. Jesse Marcel, and requested an interview. He consented and a time and date were set.

The Marcels agreed to the use of a small tape recorder for the interview. I obtained three tapes of intimate conversation with the Marcels during that four hour interview. Most importantly, I was now in possession of a drawing Jesse did for me of what he remembered of the strange writing on the beams he found in the debris field. I was so excited about the possible academic grade that this report would surely bring me. Then the unexpected happened.

The day following the interview I returned to the Marcel home in order to give them copies of ancient writing which resembled what Jesse drew for me. Two days later, I received a phone call from Jesse. The voice at the other end of my phone was hysterical and threatening. It appeared that he did not want me to use the tapes for the school project or for anything else. This phone call was so upsetting to me that I put the tapes away and again placed a passion of mine on the back burner.

During the 1980s, I went on to devote most of my time to my academic endeavors and my career as a mental health counselor. After many years of dedication, I completed my undergraduate and graduate work in Psychology in 1986. I received my Ph.D. in Human Services in 1993.

With my education complete, I decided it was time to return to my first love - Parapsychology. Once again, I began reading books on the subject and concentrating on the latest findings concerning UFOs. This eventually led me back to the Marcel tapes.

It took 17 years for me to decide to transcribe the Marcel tapes for publication. There were several reasons why it took so long to make the decision. But the most important push to publish came from an acquaintance of mine in California who impressed on me the fact that I was holding a part of history all to myself. It is now my desire to give the reader my little part of history.

Major Jesse Marcel was the intelligence officer for the 509th Composite Bomb Group of the Army Air Force stationed at Roswell, New Mexico in 1947. At the beginning of World War II, Roswell Army Airfield opened and became home to the 509th bombardment group, the only Atomic Bomber wing in the world.

Major Marcel was a key witness and one of the first military personnel to handle the wreckage of an extraterrestrial spaceship crashed near Roswell in the early days of July 1947. The very fact that this man not only touched what he believed to be a space craft not of this earth, but had pieces of it in his home, is utterly amazing. In 1947 there were no television documentaries on UFO sightings as we have today. There were no support groups for people who claimed to have had a close encounter of some kind, as today.

How do you live your life after something like this happens to you? How did Jesse cope with the fact that this incident changed his life? What did Jesse now believe that he didn’t believe before the incident? Why did he wait 32 years before coming out with his story? And would he draw what he saw?

This book will reveal the only hand drawn depiction of the debris found at Roswell - from an actual eye witness who was at the crash site.

She is the author of five novels on the folklife and folklore of south Louisiana Cajun Country. And most recently "For The Sake Of My Country" her first non-fiction work. Her novels have been called exciting, shrewd, and beautifully crafted, fresh, original, intricately woven and totally original.