Boots and the Big Daddy Rattler

An Adventure Novel for Young Readers 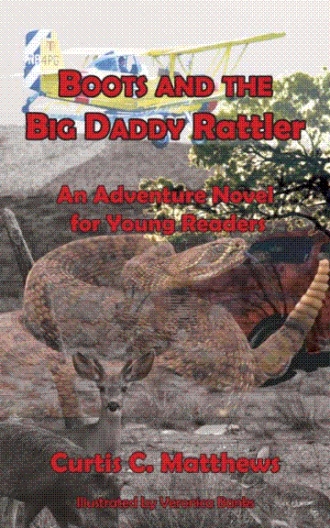 While Boots was jumping in and out of the tank, chasing dragon flies, grasshoppers, and a hornet or two, Marshal liked to walk the clearing surrounding the tank.  The occasional Cottontail or Jack Rabbit would appear, and he would rear his single shot .22 and take aim.  Marshal had to be quick, yet patient, with the .22, mostly because it was a single shot load.

Cottontails, and especially the big Jack’s, were pretty fast when they became startled, so Marshal would only get one shot.  Since it was so hot and in the middle of the day, Marshal did not expect to see many bunnies.  It was too dern hot.

Marshal meandered about, wiping his brow from under his baseball cap.  There was nothing near the water tank but a few larks, sparrows, and an occasional white winged dove, at least that he could see.

Boots had jumped out of the tank and was again chasing a dragon fly.  He stopped suddenly, peering into the tall switch grass at something Marshal couldn’t see.  Something had moved just next to the tank, on the south side.

Marshal ran up to where Boots was barking.  He still couldn’t see anything.

Boots was staring down at a western diamondback rattlesnake that was poised and cocked, rattling its tale and hissing at Boots.  They couldn’t have been more than three feet apart.

With its forked tongue spitting itself in and out, the rattler was tasting the air to see if indeed Boots was a suitable dinner.  Boots was way too big for this rattler, but it sure was angry.

“Boots, git back, git back over here!”  hollered Marshal.

Boots kept barking, but at least he took two steps back and appeared to settle just a bit.  The western diamondback is one of the largest poisonous snakes in the world, and it can be fatal simply due to its size and ferocity.  The largest ones grow to more than seven feet in length, and can easily kill a grown man when provoked.  They bite and kill more people than any other venomous snake in .

Marshal carefully observed this angry reptile from a significant distance.  Its markings were indeed that of a diamond, placed in a pattern with one on top of each other, with different shades of black, red, and brown sprinkled throughout.  It seemed to be about thirty inches long and had the girth of a fifty cent piece.

Marshal Campbell, an 11 year old ranch hand, lives alone with his dad, , in rural .  He and his dog Boots, a furry red golden retriever mix, don’t need any help finding trouble in the rugged and sandy landscape.

The hot summer day begins like any other, as Marshal and Boots feed the guineas and head out across the pasture looking for adventure.  What they don’t know is that a rhumba of rattlesnakes awaits them, hissing and rattling like a Friday night drumroll.

Their day-long adventure takes them into the next week, and the outcome is not guaranteed survival.

is a first time author.  His initial and primary career was that of a computer and software services entrepreneur.  He received an MBA in management from , and was the CEO of an based internet services company.

His passions include his three children, his wife, and their menagerie of animals.  An avid outdoorsman, Curtis enjoys golf, bird watching, hunting, and fishing.  After moving to from the in 1993, Curtis began spending time in rural and .  Because of his generous and benevolent in-laws, he has been the fortunate benefactor of a section (640 acres) of farmland just outside , .  This and future adventure stories are loosely based on personal accounts while spending time outdoors with family and friends.

Curtis plans for Boots and the Big Daddy Rattler to be the initial platform for a young reader adventure series.  Significant proceeds from all his book sales will indeed be donated to either education or animal related causes.