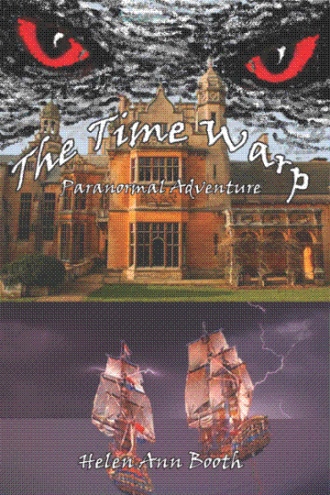 The Admiral quickly spun his horse round and at the sametime he drew out his cutlass, his eyes narrowed to slits with his fury clearly obvious to everyone. Was it the one's responsible who were still lurking within the darkness of these bushes? The Admiral wondered. He looked on menacingly at whoever was lurking in the bushes in front of him; he was not prepared at this stage to give any quarter to whoever it maybe. His crewmen followed the Admiral’s actions by drawing out their cutlasses. ‘WHOE BEE THAR’?’ the Admiral bellowed out at the top of his voice, ‘BEST THEE COMME AN BEE RECOGNIZED! Or ye'll bee damned ffer thee'll suffer thee consequence o' ye actions this nyght ye wyll’.

‘Oh heck’ Chrissie whispered and feeling very frightened. They both stood up and stepped out holding hand into the clearing; they came out right in front of where the Admiral was waiting. The Admiral narrowed his left eye at them for a second or two. He looked a huge demonic figure of a man sitting high up there; for he was high up above them sitting on his black stallion horse and his face was lit up from the camp fire making shadows appear upon it. His horse appeared to have steam coming out from its nostrils into the cold night air. The Admiral lent forward and not taking his eyes off them for one second, putting his arm on the saddle hob he lent forward. ‘Whoe bee ye strangers?’ snarled the Admiral. ‘Na speake up when I bee ask’n question o’ ye’ ordered the Admiral firmly. The admiral at this time was feeling very hostile and impatient. Tom gulped hard before saying to the Admiral, ‘I’m Thomas Harvey sir’. ‘An whoe bee thee wench with ye?’

The book is a story of a paranormal adventure which starts in the 21st century and surrounds a very old Manor House. At a certain time of the year this Manor House becomes a very dangerous place to be for if anyone is trapped inside on that date they are automatically transported back 342 years into the past, the main charactors are Tom and Chrissie who fall foul of this and once they are back in time they meet up with the original owner of the Manor House, his name is Admiral Duncan Maudly with his accomplice Kate Morgan, they are well known in these times as Buccanneers and they take Tom and Chrissie on an adventure of a lifetime, they take part in sea battles with the Spanish war ships along with many other adventures while they are trapped back in time, they eventually see for themselves Port Royal which turns out not to be a very nice place to be. At this time in 1661 a pledge had been made between the Admiral and Lucifer the Devil which was to have disastrious consequences for them all due to Lucifer's deviouse way's.

The Author of the Time Warp was born in Nottingham on the night of the Dam Busters raid on the Ruir Dams over Germany on the 16th of May 1943, the author has had many interests throughout their lifetime, one of these interests is creating facinating stories of paranormal adventures which the Time Warp is one of them, this story is the first of a series of paranormal adventures about Admiral Duncan Maudly and Kate Morgan the illagitamate daughter of Sir Henry Morgan of Port Royal along with Tom and Chrissie and a multitude of other charactors. The author was educated at West Bridgford High School and is academally a very intellegent person, they enjoyed studying Art and History along with geography of the world, they have also gained many other talents throughout their working life, having always enjoyed hand on experience with whatever they were involved in, this gave them the ability to be able to create both the technical and unusual stories from out of the knowledge that they have gained throughout their lifetime.