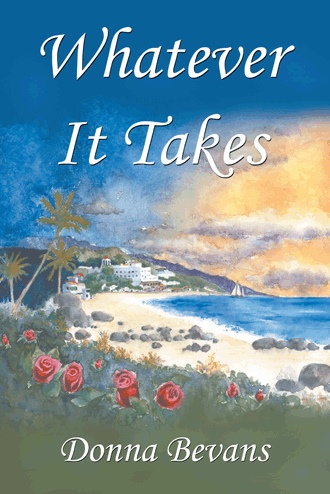 The barking of a dog woke . She tried to go back to sleep but the incessant barking annoyed her. The neighbor shouted at his German Shepard to be quiet. Wide-awake, she sat up in bed. Someone’s out there! Fear grabbed her. She crept out of bed and went to the window. Her heart pounded wildly. The security lights in her back yard flashed on. The neighbor’s dog charged at the six-foot high chain link fence. He ran back and forth along the fence, barking out of control. Terror that the man who had attacked her had come back to finish the job filled her mind.  reached for the alarm’s panic button but the flashing light indicated the silent alarm had already been triggered. The police were on their way. Her hands trembled as she grabbed the cordless phone and ran into the bathroom and locked the door. She dialed Frank’s cell phone.

“Upstairs. I’m locked in my bathroom.”

“Stay there until the police arrive. When they get there I’ll call you.”

stood, her back against the bathroom door, waiting for the sounds of sirens. I can’t go on living like this. I’ve got to find out who’s after me.

When the phone finally rang she answered with a shaky voice. “Frank, is that you?”  ’s fear had all but paralyzed her.

“, the police are at your front door. Go let them in.”

Still on the phone with Frank, she unlocked the bathroom door, went down stairs, and let the police in. They searched the house and the yard but found no one. Frank arrived minutes after the patrol car and joined the other officers. They found broken branches on the bushes below the living room window and footprints in the garden. An officer found a note stuffed between the screen and the sliding glass door leading to the kitchen and passed it to Frank.

Scrawled in pencil on a scrap of paper was written, “Don’t you think dating a cop is beneath you?”

“Do you recognize the handwriting?” Frank asked showing the note to .

“No,” she answered wearily.

Gualdoni passed the note back to the officer, “Have this dusted for prints. He may have been careless this time.”

It was after three in the morning before the police finished their investigation and finally left. made coffee and she and Frank sat in the den drinking the hot brew and talking.

“Frank, I’ve decided to buy a gun. Will you teach me how to use it?”

“Yes, of course I will. But are you sure you want to do that?”

“I can’t live my life being frightened.”

Psychologist Elizabeth Wing had it all, almost; a challenging career, trusted friends, financial security, and great looks.  Without warning, her life began to crumble. Phones calls, pictures, a break-in at her house, and a stalker who knew her every move changed everything.

Reluctantly, she called the police. Detective Frank Gualdoni found charming; a refreshing change from the victims he usually dealt with who whined about their bad luck. Seeing her lying in a hospital bed beaten and bruised he vowed to do whatever it takes to find the stalker and punish him. In the end, he did more than he ever thought he was capable of doing to keep Elizabeth, the woman he had fallen in love with, safe.

Donna Bevans holds a Doctorate in Clinical Psychology and has been a keynote speaker, trainer, and presenter educating audiences about family violence, stress and anger management, divorce recovery, and job burnout. Whatever It Takes is her first novel. Other writing credits include several short stories and a research paper on violence in the lives of women.

For over twenty years Dr. Bevans has had a private practice in . Active in the field of domestic violence, she served as Program Director at two battered women’s shelters and as Family Advocacy Program Manager at Marine Corps Air Station, .

Born and raised on , she currently lives with her husband in . You can contact the author at donnabevans@comline.com or view her webpage at www.donnabevans.net.