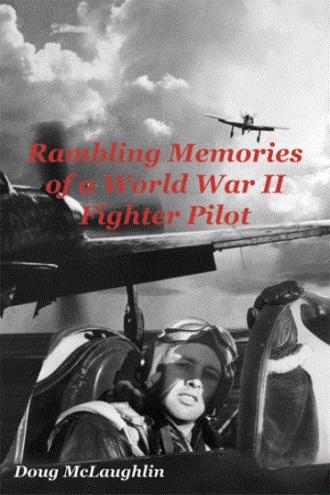 War has been described as hours of monotony punctuated with short periods of sheer terror.  I won’t ever forget that time I’m sitting in the cockpit of an F6F Hellcat  on the catapult on the bow of the Cabot during the “Marianas Turkey Shoot”, waiting to be launched.  The “Marianas Turkey Shoot” was the name given to the clash of Japanese and American Navy fighter planes off , and in the Pacific in 1944.  It was one of the turning points in the war in the Pacific, since some 300 to 400 Jap planes were reported to have been shot down in this combat engagement.

Getting back to my predicament on the catapult.  This was the incident I mentioned earlier when the two Japanese planes decided to dive bomb my ship.  Try to picture everybody on the deck of the carrier diving for cover.  Mostly they dove into the cargo nets along side  the deck of the carrier, or was it the catwalks along side the landing deck of the ship?   The Japs, like us, when in a dive or glide bombing run, sprayed the target with machine gun fire.  They used 20 mm cannons in the wings.  Ours were 50 caliber machine guns.  I’m not certain how many they had but we had six in the F6s’ wings. Anyway, shells were hitting the, in those days, wooden deck, all around me, making this thumping noise.  Later aircraft carriers were built with metal decks.  Needless to say the signalman who directed me onto the catapult and the catapult officer who gave the signal to launch me had wisely dived for cover.  So I was sitting in the plane’s cockpit with the engine revving up waiting to be launched, all by my lonesome.

I am pretty well strapped in so there was no way I could get out of the plane in time before the dive bombers finished their run.   How do I describe it when you are the target and no way of shooting back?  Incidents like this are measured in seconds not minutes;  I’ll take that any day to slugging it out on the ground like the marines and soldiers.  I take my hat off to those guys.  But back to the cockpit where I was all tied in by my shoulder harness and seat belt, I just sat frozen hoping that the Jap pilot’s aims were lousy or maybe they were shooting at some other part of the ship.  The 20mm cannon shells hit the ship but their bombs did not, thank goodness.  When I looked up they looked like they were passing through 5-10,000 feet above at somewhere around 350-plus knots and looked more like fighters than dive bombers and in my mind I can still see them to this day.

The other enemy planes went back and to the left of us in a steep dive pulling some of our planes after them.  They flew  low over the airfield with some of our planes chasing them.  The enemy AA fire was silent while they went over the field but opened up really heavy when our planes went over, shooting down several of ours, mostly because our planes were so low.  I guess it was true that the Japanese pilots we met were some of their mighty good pilots because they sure snookered us.  It also didn’t help that was so heavily fortified.  It had more anti-aircraft guns than any island I ever attacked.  Not a very friendly place.

Back to me, I spotted a Jap plane shooting heavily at the tail of one of our planes  below me.  I opened up on him and he turned, climbing and heading directly at me.  I kept pouring fire into him as I dove on him and he burst into flames.  Every sixth shell is a tracer so it is easy to see where your bullets are going.  Looking back I saw a column of smoke where I guess he hit the water.

One of the oddities of this episode was that I hesitated in firing on him because he was brown in color, apparently a Japanese Army Air Corps plane and the wrong color for a Navy Zero.  He looked a lot like a P40 but there was no way that could be, since the U.S. Army Air Corps was nowhere near this part of the world.  So I came to my senses and fired on him.  While I was firing on him he was firing at me as we were heading at each other.  It was almost like we were playing chicken.  Anyway my bullets hit him often enough while his were mostly tracers going over and under my wings that he lost in the battle of “chicken”.

It turned out later that this plane I shot down was attacking our squadron’s leading ace, who by war’s end was credited with 22 kills.  He later confirmed my kill.  This may have

I really wrote this book because of what happened when I was talking to four young guys at a friend’s party.  They seemed to be fascinated to hear about my World War II combat experiences.  They kept urging me, for instance, to tell them more about when I, as a Naval fighter pilot in the Pacific, joined up on four Jap fighters, an event I describe later in the book.  They sat so mesmerized listening that as I wound up the story I couldn’t help stretching the truth a bit by telling them I made too steep a dive at the end of the encounter, went into the drink and drowned.  Up to that last part they were sitting on the edge of their seats, hanging on every word.  Then, as they realized I was only pulling their legs with the part at the end, they wanted to hear more stories.  It got me thinking that maybe my wartime yarns might also be of interest to others, considering the growing interest in the “World’s Greatest Generation” and World War II.  Hence this book

Doug McLaughlin, Cdr. USN (ret), was born in in 1921.  His family moved to when he was in grade school, and he grew up in the--then--small town of along with a lively group of buddies who still keep in touch.  He left the in 1942 to train as a U.S. Navy fighter pilot, and was soon seeing action in the Pacific.

Now living on Camano Island, WA, the author and his wife, Avonne, enjoy traveling to USC Trojan  football games and celebrated their 59th anniversary snorkeling with the Oceanic Society in Belize.  They raised four children and have five grandchildren and three great-grandchildren.