Who's Walking Around in Your Head with Muddy Boots?

New Tools for Self-Discovery and Self-Healing 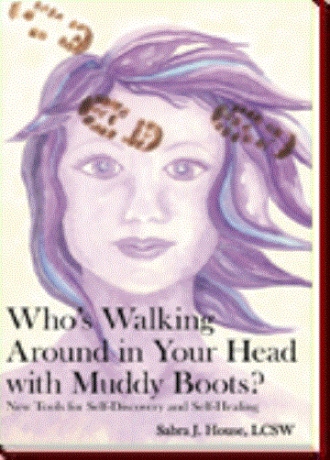 A third way of understanding negative thoughts is to identify the character in our head that’s saying all these negative things. This character can be someone real or something imaginary. The one constant is its ability to be negative and critical. I learned about the internal negative voice the hard way and the most significant way. I experienced it. I had a Loch Ness monster that I named “Nessie.” This was a long time ago, before I had a graduate degree and even before I became a psychotherapist. Nessie would raise her ugly head and take advantage of every moment of my vulnerability. Actually, Nessie wasn’t really ugly. Nessie would raise her head and begin to speak ugly thoughts, “You’re not good enough” or “You’re not smart enough.” “You’re too old to go back to school.” “You’ll never succeed.” “You’ll never be happy.” Nessie was articulate and knew just when to speak up. Let there be a fleeting moment of doubt, a moment of weakness or loss of courage and Nessie jumped right in with a comment of her own. Of course, these comments were always on the negative side, the side determined to make me feel worse.

Times of change and times of newness were particularly difficult for me. I did pretty well with structure and familiarity, but if I were put in a new situation with unfamiliar skills or lack of expertise, my mind became fertile ground for Nessie’s comments. So there I was, at the end of a marriage, in the middle of an awkward dating situation and beginning graduate school after a ten-year hiatus from college. Nessie rose up out of the and had a lot to say.

I can’t tell you just when I identified Nessie, or named her, but I distinctly remember when I took up the battle with the monster inside my head. The first time I told Nessie to “Shut up,” she looked shocked! She turned her head toward me and looked at me in amazement. How dare I speak to her in such a manner? How could I possibly suggest that she be quiet? Nessie was quite distressed and not at all pleased. How dare I restrict her? Thus began the battle for the territory I called “my head.”

I knew Nessie was part of me, but she certainly felt like and sounded like a separate entity. In any case, it was time I took control and since she was part of me I should be able to control her. Right? Wrong! Nessie had a mind of her own and a determination that would put most of us to shame. She did not intend to give up. She knew that if she was silenced she would lose power and possibly existence. She didn’t want to do that! Nessie fought back.

Who’s Walking Around in Your Head With Muddy Boots? is a book about discovering tools for understanding yourself. It is directed toward people who want to grow and change. It is designed for those who want deeper insights into themselves and who wish to develop creative ways of dealing with the challenges in their lives. It is for those who have some sense that hey are on a purposeful path and are not quite sure what that path is all about. This book will lead you on a treasure hunt and you will come to discover that the treasure and the answers are within you.

The tools described in this book come in the form of questions – projective questions I began asking myself and my patients many years ago. They are simple questions that lead to answer that can be interpreted, explained and understood. The ultimate goal is for these answers to lead to self-knowledge, personal growth and enlightenment. Wayne Dyer says, “The door to enlightenment opens inward.” I think that this book Who’s Walking Around in Your Head with Muddy Boots? will help open that door.

Who’s Walking Around in Your Head with Muddy Boots? is geared toward people interested in psychology, self-help, personal growth and spiritual development. It is directed toward an audience who seeks answers from personal growth seminars. It is for therapists and for people in therapy. It is for people who want to explore their inner-selves with or without the assistance of a therapist. It is a means to self-discovery, self-maintenance, and self-healing.

Sabra J. House LCSW is a psychotherapist who spent ten years working at in before moving to . In 1991, Sabra established The Lighthouse Center – Wellness Counseling and Consulting. It was during the early months of her private practice in that she began writing the stories and the responses contained in this book based on her first ten years as a therapist. The book is designed as an opportunity for the reader to review what others have said and then apply the responses to themselves. The result is an opportunity for introspection and growth in a very simple and safe setting. The book introduces tools for self-discovery and self-healing.

Sabra attended in . She taught high school English for three years and then attended in earning her Masters Degree in Social Work. Now, even after twenty-five years as a practicing psychotherapist, Sabra continues to pursue the personal growth and mental health of her patients, still providing and teaching skills for successful and abundant living.