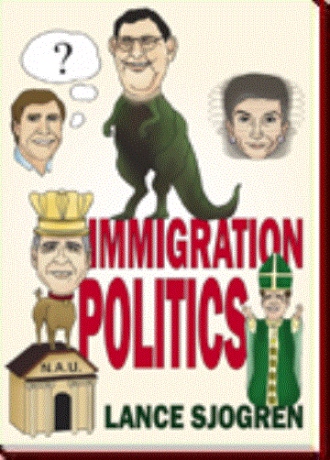 “A dark-skinned immigrant running from a pursuing police car.” [i] were disavowed by Sessions, who indicated his campaign was not involved with the ads [ii] The SPLC disingenuously spun this into an assertion that Sessions “found them [the ads] so repugnant he joined Frost in calling for them to be yanked off the air.”[iii] Presumably, the SPLC would have been more comfortable if the ads had featured Icelandic illegal aliens loitering on street corners and running from a police car, which, of course would also have the virtue of being much more factually accurate.

Sessions ultimately won the election, but it can’t be said that immigration policy necessarily played a role in that election, since the candidates themselves didn’t engage that issue and Sessions had the edge to begin with based on the redistricted boundaries.

One election that was a disappointment for the pro-borders side was in the third district of Kansas. Kris Kobach, a first-tier pro-borders Republican candidate with a background in immigration law enforcement, scored an upset victory in the primary, beating better known Adam Taff by a razor-thin margin of 207 votes. However, the Democratic incumbent, Dennis Moore, won the general election in this competitive district by a comfortable 12 percent margin of victory. [iv]

To promote the election of pro-borders advocates to Congress, Congressman Tom Tancredo founded Team America PAC (political action committee). You can count on Team playing an important role in the 2006 elections.

Of those Congressional contests in which immigration policy was an issue, the most lively and heavily contested were those of Chris Cannon and David Dreier.

Chris Cannon has been called “George W. Bush’s point man” on immigration in the House of Representatives. As will be clear after reading this section, that is a decidedly mixed blessing for Bush.

Whatever else you think of Cannon, you have got to admire his candor. Consider his statements in the following newspaper article that he made regarding labor policy.

Cannon, whose spirited defense of undocumented immigrants as a blessing for the economy and culture has won him honors from Latino rights organizations, waxed enthusiastic about his own experience in the marketplace of immigrant labor in .

He talked about his decision to replace the roof of his house. The low estimate, he said, came from a contractor who “uses labor that I suspect is not here legally.”

Asked what he would say to legal immigrants such as Jimenez and Milano who fear losing their livelihoods to newer illegal immigrants willing to work for less than a living wage, Cannon responds with unabashed enthusiasm and candor.

“The point is, in there are no guarantees. . . . So, Gerardo, if you’re not going to make it in drywall, then you might want to try something else because you’ve got the skills” he said.[v]

It appears that the ability for Cannon to save money on his roofing project by the use of illegal alien workers was a profoundly religious experience for him.

Mark Krikorian recounted in a National Review piece that in a MALDEF ceremony Cannon “even praised pregnant women who sneak across the border to have their children.”[vi]

Matt Hayes, a staunch pro-borders writer, also had some excellent points to add. Regarding Cannon’s coziness with MALDEF, Hayes pointed out:

Cannon, a lawmaker, has openly expressed his contempt for the distinction between legal and illegal immigration. “We love immigrants in . We don’t make the distinction very often between legal and illegal,” he said on , as he received an Excellence in Leadership award from MALDEF, the Mexican American Legal Defense and Education Fund. Cannon’s remarks are entirely consistent with the beliefs of MALDEF’

This book is a comprehensive look at contemporary immigration politics, from the partisan standpoint of an immigration reform advocate.  It covers a wide range of topics, including who the major players are on both sides, laws enacted and proposed, elections in which immigration has been an issue, public opinion, and grassroots civic activism.

Lance Sjogren was born in Portland Oregon.  He grew up in Corvallis, Oregon and earned bachelors degrees in Engineering from Oregon State University in 1981, and a Masters and PhD in Electrical Engineering from U.C.L.A. in 1993.  Since 1993 he has worked in the field of Microwave Engineering in Southern California.  He gained an interest in immigration reform in the mid 1990's, and has closely followed the developments on that issue since then, as a political junkie.