Foreword by Brian May 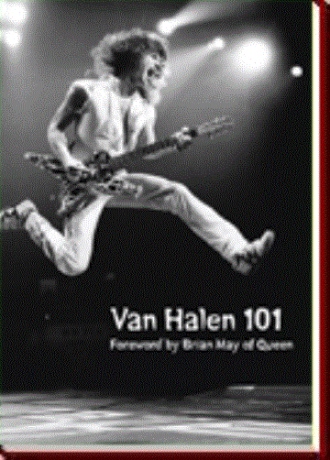 I remember the first time I heard “Eruption.” I wasn’t even playing guitar then. I think I was about ten years old. I had a buddy who was older than me who played. Well, he played “Eruption” for me. I was just like, “Is that a guitar?” I didn’t even know whether it was a guitar or what it was. This was around the time I’d just started gettin’ into Sabbath and everything like that. Then I heard “Eruption” and I just couldn’t believe what I was hearing, you know?

Then I remember hangin’ out at a buddy’s house one night. We were all hangin’ out in the backyard, just chillin’ out, and we were listening to Van Halen II. That was the first time I heard “Spanish Fly,” and I remember thinking, “How can anybody get that f**kin’ good?” It was beyond insane. I didn’t think it was physically possible to play like that! It was ridiculous! Man, to this day it still holds up. It’ll hold up forever ‘cause it’s that brilliant. Far as I’m concerned, Eddie’s the complete package. Technique aside, his rhythm playing, feel, songwriting, tone, riffs, leads – man, it’s all there. It’s like the best-tasting beer you ever drank in your life!

It’s just, you know, all the great ones write their own s**t. Like, certain players are great songwriters that happen to play guitar. Then you got certain guys that are amazing guitar players, but they can’t write a song worth a s**t! Eddie does it all. He’s the complete package, man. That’s the greatest thing about him – he does it all. Even as far as tapping, he’s always used it tastefully. He was able to fit that into cool rock songs, as opposed to it just being in some insane musician level. Another really cool thing about Eddie is he always mentioned Eric Clapton, Allan Holdsworth, and all the guys he dug, you know? Oh, and far as speed goes, Ed’s not just about playin’ fast. He can play slow s**t, too. He can do anything. He’s a great songwriter, crafts great riffs, has amazing tone, and his solos are insane, too! I’ve always looked at solos as the icing on the cake. But you gotta have a cake, you know?

Till this day, Eddie is a major influence and inspiration. I got his pictures in my music room and out in my garage, when I’m liftin’ weights and jammin’. Before we go out on stage we’ll just crank early Van Halen. Like, on the tour bus, we’ll just crank that s**t and it gets us all fired up – especially if you’re a guitar player, you know? It’s like, “Oh, think you can play? Listen to this s**t!” [laughs]

When I look at Van Halen as a band, they were lethal. Man, especially the original. They’ve always kicked major f**kin’ a**, but the original was insane. Ozzy’s always told me that when Van Halen came in, it was the changing of the guard. VH opened for Sabbath back on their first tour in 1978 and Ozzy always says to me, “Zakk, they just f**kin’ crushed us every night!” They had that fire, man. They were just undeniable. It was just sick-a** f**kin’ greatness.

I remember when I was growin’ up as a kid, a lot of jazz players and other players looked down on a lot of the rock players. Basically, they felt rock players couldn’t really play worth a s**t. You know, they thought most rock guitar players

“Without a doubt, Eddie Van Halen is the greatest guitar player who has ever lived.”—Zakk Wylde

Van Halen is as American as apple pie, Ford Mustangs, and fake breasts. However, underneath all the fun and flash is one of the most important and influential, soulful and successful bands in history. With their explosive 1978 debut, they changed the face of rock. As of 2005, they have earned a dozen consecutive multi-Platinum albums with sales reaching in excess of 75 million copies worldwide.

Van Halen 101 is a comprehensive guide to the amazing history, music, impact and influence of the Mighty VH. No hype, no b.s., just the facts. Includes a Foreword by Brian May of Queen and a tribute to Edward Van Halen by over 100 of the world's greatest musicians! From Allan Holdsworth and Steve Vai to James Hetfield and Zakk Wylde, all the greats came forward to personally share their thoughts, memories and stories about the man simply known as "King Edward."

“I liked what I read a lot. This book is a labor of love and all true VH fans will love it.”—Alan Paul, Guitar World (Sept 2005)

"A comprehensive guide written in an extremely conversational tone. Sanchez is a great raconteur." -- Chris O'Byrne, Guitar One (May 2006)

As a true fan, Abel feels this shouldn’t be about him, but the band to whom he’s devoted the last two years of his life writing about – Van Halen.