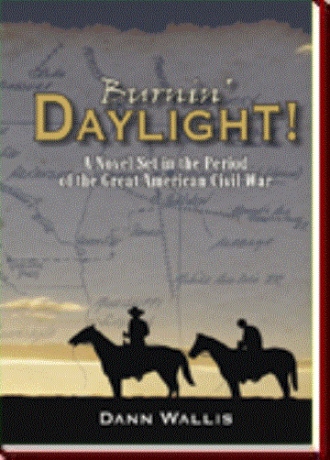 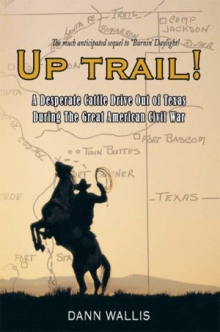 As the author of Burnin’ Daylight! Mr. Wallis provides a new, historic novel set in the period of the great American Civil War.  A novel with more adventure…more romance…and more history of this critical period that shaped this nation and has become so fascinating for millions of Americans.  The history of the early days of the Civil War is told through the actions and adventures of fictional characters in the style of Herman Wouk’s The Winds of War and War and Remembrance.

In the early days of 1861, two young men, one from a ranch in and one from a farm in , leave the security of their homes and the love of their families to seek the adventure that may await each just over the next hill.  While seeking to satisfy that wanderlust, they each volunteer to serve, on opposite sides, in this nation’s bloodiest conflict.  Thirteen months later, in the spring of 1862, they meet at the end of the second day of the most costly battle of the war’s entire western campaign; the battle history would call (Pittsburg Landing) in .  The Union corporal having served out the time of his muster has become so personally devastated by the effects of his participation in five major battles in thirteen months; he makes the decision to leave the war for whatever new life he may find in the west.  While scavenging the now deserted, ghostly battlefield for supplies for his trip, he encounters a severely wounded Confederate Officer.   Resisting his months of training to kill this enemy and move on, he finally agrees to bind up the Confederate’s wounds as they make an uneasy pact to help each other; the Yankee to his imagined new life out west away from the war and the Confederate to return to his home in Texas.

During their nine month trip west, as they slowly begin to grow beyond their hatred and suspicion of each other, they are confronted by both Confederate and Union patrols, cross the flooded Mississippi River at night on a raft, engage in a gun battle with a band of renegade Confederate bounty hunters, and a saloon shootout in Texarkana with horse thieves.  The Union soldier falls in love with the widow of a Confederate Officer as she tries to save the life of his Confederate comrade.  The ex-soldiers help a young Southern lady from a political family and her newly freed slave break her Union husband out of the largest prisoner-of-war compound west of the .  Along the trail, the former enemies spend their nights by the campfire discussing their understanding of this war from two very different backgrounds. The stories historic content is strengthened by “Author’s Notes” interlacing the war’s history at that moment with their moving adventures.  The readers will gain a deeper knowledge of the history of the American Civil War in the west, long neglected by most historians, as they are carried along by the story’s adventures.  The book ends poised for a sequel.

Dann Wallis is a retired senior business executive.  He is a native of and graduated from with a degree in Industrial Engineering, later doing graduate work in business at the , .  As a licensed Professional Engineer in three states, he continues to conduct a private consulting practice on a part-time basis, and occasionally writes and delivers seminars at , where he also served as Chairman of The Institute For Senior Professionals.

“Burnin’ Daylight!” is Mr. Wallis’ first novel, however two of his earlier poems were published by the American Poetry Anthology in their 1985 edition, when he also won the Golden Poets’ Award by the World of Poetry.  In 2004, a short story which he wrote as a memorial to his high school mathematics teacher, “A Tribute to the Lady With The Blue Hair and the Sensible Shoes” was published by the Democrat Publishing Company.  He has authored numerous business articles during his distinguished professional career.

Falling heir to the 1862 Springfield rifle that his great-grandfather had carried in the American Civil War launched Mr. Wallis interest into this fascinating and important period of our nation’s history.  His great-grandfather, John Wallis, was a Private serving in Company E of the 19th Iowa Volunteer Regiment in the Western campaign of General Grant, and was later a prisoner-of-war confined at in .  That interest was further peaked when Mr. Wallis joined a Civil War Roundtable group sponsored by .  As part of his research,  Mr. Wallis has toured each of the Civil War sites where his novel leads the reader.

Mr. Wallis is a decorated veteran of the Korean War and makes his home in