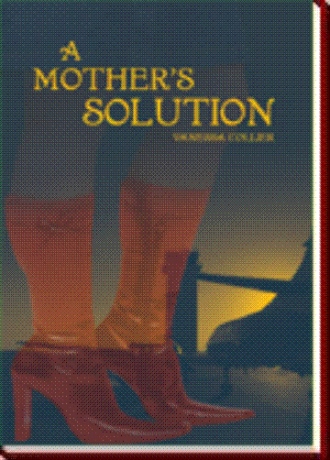 Evelyn could not believe the turn of events in her life within the last eighteen months. Cruising unconsciously down , oblivious to everything, she fought her lack of concentration, bringing her attention back to the road. When and how had it all begun, who’s fault was it, and why did it happen to her, she thought. Countless times she’d gone over these questions in her mind, knowing full well where to lay the blame. It seemed there were no other options, no one to count on, except him.

She continued down the street, swinging a right at , then, another right onto , which thankfully, wasn’t too busy at the time. She couldn’t have dealt with a lot of traffic with her hands shaking the way they were and all she needed to remember.

Sitting at the red light, staring expressionlessly at , brought back pleasant memories. She’d seen countless plays there. An established tradition during the Christmas holidays, to dress her daughter Serrita in her prettiest outfit, have dinner at an exclusive restaurant, then see the Nutcracker performed in all of its’ splendor and dazzle.

She remembered Serrita’s face, all aglow from the excitement of the evening’s festivities. She could still see the beautiful black velvet dress she’d worn the last time they attended the show together. Her hair styled in expertly corn-rowed and adorned with beautiful silk ribbon.  Her missing tooth gave her a cute but mischievous smile as she looked up at her from the candlelight dinner they enjoyed after the show.

Evelyn took out the sheet of paper, refreshing her memory of the address he’d given her, . A decent enough sense of direction told her she would need to go past , closer to . She rode two buildings away and began looking for a parking lot. Finding one on Ninth Street near the Rock N’ Roll Hall of Fame, she joined the line of cars waiting to get into the parking garage.

Sitting there, waiting to get her ticket and find a space, the reality of her situation pressed her spirit downward, like a sinking ship, piercing the cold water, plunging quickly to the bottom of her tired soul.

At this moment she needed to hear her mama say, “Everythang’ll work out, baby, you’ll see. God’ll make a way.” Her mama would say this as she held her to her bosom, kissing her lovingly on her forehead, the way she so often did when Evelyn was a child. Her fractured heart needed that right now like a broken arm needed a cast. Without it the erroneous healing process promised to leave her life crooked and deformed.

A gray-haired man in the car behind her leaned on his horn impatiently and waved Evelyn forward. Mechanically she shifted the car into drive and did as she was ordered. From her position she had a good view of . On this cold, brilliantly-clear, sunny day in December, the lake was a beautiful, bluish gray, with its peeks etched in white. Along the shore, abandoned yachts happily bobbled up and down against the semi-frozen water in anticipation of the return of summer fun. The scene provided a beautiful feast for the eye. Normally, this would provide a calming affect, which would have under different circumstances given her warm and fuzzy feelings inside. But in the last few months she deliberately neglected to notice any beautiful works of God. She felt the conviction of her act slamming against her flesh like her father’s old leather strap, beating her down unmercifully, with her rushing around trying earnestly to shield herself from the pain and damage.

Her life had been as close to picture perfect as any could be. Happily married to a man she adored, together, they had two beautiful children. Existing in a stagnant state of euphoria, the rug was ever so rudely pulled out from under her. She’d been caught completely off guard, loosing her balance and slipping with her feet pointed straight up in the air, falling violently onto her back. Without a moment’s notice everything changed.

The man behind her tooted his horn again for her to move the car forward. Bringing her abruptly back to reality, she pulled the car up to the attendant’s window,

“Fill up the upper levels first, ma’am.” The attendant said pointing in the direction he wanted her to go. She removed the ticket from the automated dispenser and without thinking, moved forward.

Remembering all of the television car chases in parking garages she’d seen, she now wished that she were one of the actresses, with assured victory in an otherwise damned situation.

Finding an empty spot on the fourth level, she pulled in between the yellow lines and sat in thought for a few minutes.

“If this went off like he said it would, then I’ll leave afterwards. Should I return to the car,” she panicked as she thought. “Will the parking attendant be suspicious? My appearance will be different, so, he may not even notice me. Perhaps I should abandon the car altogether. Is the car worth me being discovered?” She thought uncomfortably. It was all too much for her to figure out. He hadn’t gone over all of this with her. Evelyn shook her head in an attempt to clear it and pull herself together. She needed to be strong for her kids. She wept, thinking about and Serrita.

Drying her red, swollen eyes with the sleeve of her coat she noticed a gray Buick sedan pulling slowly around the corner. Looking suspiciously at the driver, an elderly wh

Evelyn Hill enjoys a life most would envy. With a beautiful home in the suburbs of Cleveland, a loving husband, two wonderful children and a successful career, she feels pleasantly content with life.

One day her upscale, suburban lifestyle and sense of contentment is brought to a screeching halt, sending her life spiraling down into the dark world of teenage domestic violence. Her daughter’s relationship with an abusive boyfriend forces Evelyn to face the fact that her world as she knew it would be changed forever.

Sitting at the hospital beside of her daughter, who is teetering on the edge of death, her desperate need to save her child from imminent demise, leads her to a familiar stranger, Blake Walker,

Blake Walker is a police detective, who doubles as a vigilante hit man, helping innocent women in the community fight abusers who refuse to stop until they kill. By a chance encounter, the two develop a relationship based on murder.

With her husband dead from a heart attack Evelyn is left alone, facing a problem that is foreign to her and could be potentially fatal. She feels lost, never having any involvement with such danger.

Thinking that their plot to murder her daughter’s abuser went successfully undetected, they laid low until enough time passed. Eventually, they emerged from under a cloak of secrecy; feeling comfortable knowing they had completed their mission.

Unbeknown to them, their secret did not go undetected by Blake’s co-worker, Detective Smith. Detective Smith was a fanatical in his resolve to provide justice for the murder victim.

Making a daring escape to the pair’s secret brings them closer than either had anticipated. In this nail-biting mystery Vanessa Collier reveals the depths of a mother’s love and the journey she willingly took to save the life of her child.

Vanessa Collier lives in with her husband and two children. A Mother’s Solution, her first novel; serves as her true labor of love. Inspired, Vanessa was dedicated and passionate about giving a voice to the victims of domestic violence who mostly suffer in silence, from this number one killer of African American women.

Vanessa is an educator, currently working on her next novel. She attended , where she received her M.Ed. in educational administration. Recently, having been inducted into Who’s Who Among ’s Teachers Vanessa works hard to keep her students encouraged and achieving their goals.

Vanessa would love to hear from women readers interested in stopping the violence against women, or if you would like her to speak to your group please contact her at this email address: van50c@aol.com