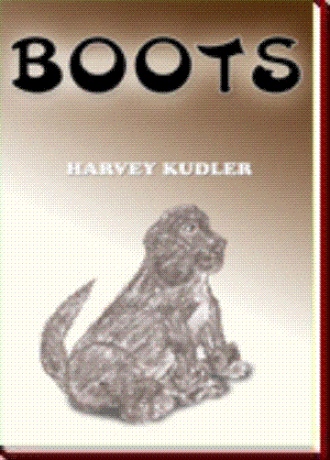 Nicholas was a twelve-year-old boy who lived in a little country house. The house was surrounded by woods and a vast six-foot-high wheat field.

If you were tall enough, you could see the wheat for miles. It looked like an ocean of wheat flowing in the wind.

The sun gave the wheat a shimmering golden look.

Nicholas was playing on the swing in the backyard. He fell off and landed on his behind.

While lying on the ground, he almost laughed at his plunder.

All of a sudden, out of nowhere, a funny-looking dog appeared licking his face.

The dog looked like a cocker spaniel with short jet-black hair and a long fluffy tail. The dog’s feet were so full of hair that it looked like he was wearing boots on all four feet. He had a mustache and a short beard, black eyes and nose. Nick couldn’t think of any other name for him other than Boots.

Boots was a friendly and very loveable dog. He and Nicholas played all day, running and jumping around the backyard.

Nicholas called his mother outside to see Boots. She went out to the porch and down the stairs, and looked at boots. She said, “He’s adorable.”

Nicholas asked his mother if he could keep Boots. The dog took a liking to his mother right away.  She said he was a very good dog and that Nicholas could keep him.

The next day, Nicholas took Boots for a walk outside the fenced yard, and he ran barking into the wheat field, looking back to see if Nicholas was following.

The dog seemed to know where he was going. Nicholas followed through the tall wheat and suddenly felt a sharp pain in his head. He had run straight into an iron water spout.

The book takes place somewhere in the mountains. These mountains almost seem like they are real and then maybe not. There are different times of reality and fantasy if you believe in both. What the powers of time can do, if you believe.

This is a story about a dog with special powers. He seemed to appear out of nowhere. You will find how a dog communicates with people. His powers are that he seems to know when someone is in trouble. He knows where they are and how to get to them. Boots will bring you into a world of illusion.

The story you will read is about a liquid that all of us dream about and wonder if it really exists.

This book contains different episodes in which Boots helps people in different situations. How a friend can help in the time of need.  Boots also has his own dilemma and shows us how you can help yourself and how you can also be helped by a friend.

The future comes before time.

Thus it’s history all the time.

Good or bad, make the best of time.

Remember time is nothing but a memory.

So, enjoy life while you still have time.

is a very special person with many talents.

They range from playing the trombone in the All City Orchestra to building a house. He is very artistic with a love of people and life.

is a very striking man. He is tall with white hair and blue eyes. People will turn and look when he walks in a room.

He is a wonderful father, grandfather and husband.

May he live a long, happy and healthy life.