Courage on Bataan and Beyond 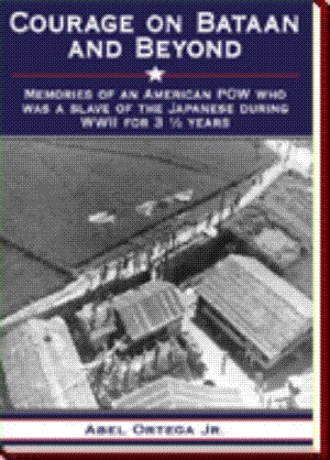 The Japanese attacked the within hours of in December of 1941. was not prepared in either place. About twenty-five thousand Americans had earlier been sent to assist in the anticipated need to defend this island nation located seven thousand miles west of and about six hundred miles south of Japanese-controlled . Most of these men had been activated from National Guard forces and arrived only a few months or weeks before the war commenced. The odds were close to hopeless for the Filipino-American forces, for in most cases they had been given outdated equipment and ammunition stockpiled from WWI with which to fight. The Japanese military was modern and battle-tested from years of fighting in and for the most part had quality equipment. No relief from the east was possible, and the Filipino-American forces soon came to realize that they were expendable. After four months of fighting on the , and another month on , the surrender of became necessary. Unlike , the war for these far-flung American and Philippine forces continued for months. Then, as prisoners of war, it continued for years. These men had given five valuable months of fighting for the necessary buildup of supplies in the . This military buildup and delaying action may have prevented a Japanese invasion of .

As POWs, the odds of surviving for these men were low. But, no one had anticipated that starvation, disease, forced labor and barbaric treatment would be part of their treatment under the Japanese. Abel F. Ortega shares within his writing the months and years branded in his memory of his life as a prisoner. His personal faith, youth, strong family ties and a deep ingrained desire to return helped sustain him through the worst of the treatment and indignities of those years. The reader is brought along into his personal agony and will gain a clear understanding of Abel’s thoughts during his time in the camps and on the Japanese Hell Ships.

It would be impossible otherwise for any of us who did not suffer the ravages of war as a Japanese prisoner in World War II to imagine or sense, with any accurate degree, what really took place during combat, then as a POW on the Death March and the years of imprisonment. But within Courage on Bataan and Beyond, written carefully, but with masterful sensitivity by Abel with the close assistance of his son, Abel, Jr., one can gain some understanding of those days. We are brought along and somehow, we can understand. We should all see and appreciate the special relationship of father and son, for in the writing it is the son, Abel Ortega, Jr., who wants to ensure that his father’s story is not lost, but will be told for the generations of the Ortega family, researchers and historians yet to come who might not otherwise know the events of those days over sixty years ago. There is much here to know.

In the comfort in which most of us live our lives today, even the headiest of imaginations cannot bring us to fully understand the events of those WWII POW days. Who can comprehend the bestial handling of these men as they staggered along on the Bataan Death March, or the inhumane handling of the innocent Filipino civilians along the way north to that first POW area, ? Who of us can sense the deep hunger and thirst beyond description during those hot and humid tropical temperatures of April 1942, while these POWs were struggling along those primitive roads on the march north—and within the impossibly crowded conditions on the boxcars and within the darkened holds of the Hell Ships? The endemic malaria and dengue fever of the , along with deliberate food deprivation in the camps, created deadly conditions. Ultimately, over the years of imprisonment, these continued conditions, along with diseases and illnesses aggravated by lack of sustaining food, caused over five thousand deaths in just the early months of imprisonment. Over 38% of these men died during the years of POW time, but no help was given. Who of us but in seeing pictures of the weakened and dissipated men who did survive Bilibid Prison, Cabanatuan Camp and the Japanese POW Hell Ships can understand that few of these men could even recognize their friends who were lying next to them, still alive, but unrecognizable from their shrunken appearances and haggard faces.

“Courage on and Beyond” is a comprehensive story about Abel F. Ortega’s life during the Bataan Death March and Japanese imprisonment written by his son. Abel will take the reader with him from his childhood days when he would sit in a rocking chair and dream about the Far East to defending the Bataan Peninsula in a last ditch effort to keep the Japanese from taking the Philippines. Abel narrates how his family’s prayers and his faith in God helped him to survive the infamous Bataan Death March, three-and-a-half years as a POW and two Hell Ship Voyages. This book will evoke both laughter and tears as one follows Abel from captivity to liberation. In his three-and-a-half years as a POW, he endured near starvation, hard labor, torture and the indescribable and inhumane cruelty from his captors before being set free . There were very few POW’s who survived the Japanese brutality of and their following captivity, and of these, not many are still with us.  Today at 85, Abel feels his story needs to be told so that the brave soldiers of will not be forgotten once again.

Abel Ortega Jr., the second youngest of seven children of Naomi and Abel F. Ortega, was born in 1964 and raised in . As a child growing up, he would enjoy listening to his father’s POW experiences from WWII not fully understanding the true meaning of those stories. As he became a man, he finally understood and realized what his father went through. Those stories brought forth an obligation out of respect for the man he calls his “Hero” to compile his father’s experiences in a book so that they would not be forgotten. Those feelings would inspire him to spend two-and-a-half years researching the Prison Camps and Hell Ships. Abel Jr. currently lives in with his wife Lorrie and two sons, Justin and Austin.