I Wonder Why? I Know Why. Never mind!

by Jamael McCauley with Jerry Ingram 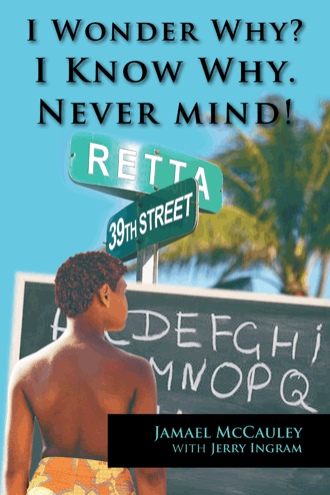 Suicide It was just days before his eleventh birthday when Deshawn received dreadful news that forever changed his perspective on life. He had just turned the corner when he noticed two St. Louis Police cars and an unmarked vehicle in front of the Jenkins’ driveway. Deshawn was sure that someone must have broken into their home and stolen some things. If someone wanted some good stuff to pawn then their house would’ve been the perfect place to score. He gleamed at the opportunity to play kid reporter again. He was known for putting pencils up to his friend’s mouths to imitate interviewing them. He believed that after his professional baseball career he would retire and do color commentary for the St. Louis Cardinals baseball games. His friends always played along with him. They would pretend to be a famous athlete or movie star. However, this was not entertainment. As he eased as close to the house as he could possibly get all he could hear was Kendra crying. "Where is my mommy? What happened to my mommy?" she bellowed. Deshawn figured she was just upset as a result of the break-in. That is until he heard her scream again, this time even louder, as if something was seriously wrong. “I want my mommy. What happened to my mommy?” This could not be happening at the Jenkins' home he thought to himself. Moments later Mr. Jenkins came out of the house and saw Deshawn standing at the gate and as usual he said, “Hey little fella?" Deshawn’s mind was racing. The little voice in his head was urging him to ask what is going on. He wanted to ask why Kendra was crying for Mrs. Jenkins. He wanted to ask why she was so upset. But he didn't say anything. He couldn’t. He just looked up at him and then at the ground. Next, he turned around, and walked back through the crowd of people who’d gathered in front of the house. Women in slippers, gowns, and with rollers in their hair were talking amongst themselves. “I told you they were always fronting, keeping up with the Joneses and thinking they are better,” said Ms. Price from up the block. “It’s the ones that think they all that. Those are the ones that have the most problems.” Deshawn could feel his heart beating. He couldn’t see anyone. He just kept hearing voices. “I told you she was crazy, said another neighbor.” Deshawn wanted everyone to go back into their homes and miserable lives. All of a sudden everyone was speaking badly about Deshawn’s favorite family on the block. Was it all because Mr. and Mrs. Jenkins lived a good life? He was saddened by the fact that his neighbors showed no compassion for a family who treated him as their own. As he looked back one last time, he watched Mr. Jenkins; hands in pocket make his way back into the house. It was the first time he had seen a man so hollow. He now knew what his mom meant when she said that her body is here but not her mind. Deshawn just kept thinking about how Mr. Jenkins was always so kind to he and his mother. He took care of his wife and kids. No one had to haul him into court to make child support payments every month. Nobody had to go looking for him because he hadn't been home in a week. He’d heard rumors in the past, but never believed them. Last month Deshawn was over at Yardra Faye’s house and over heard her saying that Mr. Jenkins pulled a knife out on Mrs. Jenkins and the police were at the house. Later that evening Charles came over to talk to Deshawn. “What’s up man,” said Charles standing on the porch. “Nothing much,” replied a nervous Deshawn. “Sorry to hear about your mom.” Charles sat down on the steps and Deshawn followed. “That’s okay. It’s not your fault,” he said with tears streaming down his face. “I can’t believe she’s gone. It’s my dad’s fault.” Apparently the Mr. Jenkins that Deshawn knew was not the same Mr. Jenkins behind closed doors. Charles told Deshawn that his father’s gambling habit contributed to his mother committing suicide. It turned out to be true that he had put a knife to his wife’s throat and threatened to kill her. The two of them stood on the porch, then sat and then stood some more, talking for what seemed like hours. Deshawn’s mother peeked out the window a couple of times but once the street lights came on he didn't see her at the curtains again. Charles told Deshawn that his father had been gambling obsessively and lost the family’s savings. “We’re even losing our home. I guess ma couldn’t take it.” His mother wrote a suicide note and drove her car into the Mississippi River near the Arch and Busch Stadium. That night Deshawn lay in his bed asking God why over and over. “Why did she do it? Why did you let her do it God? You could’ve stopped her. Bring her back God. Please bring her back.” Deshawn struggled with the thought of death for the remainder of the weekend. He was sad and detached as he sat in first period English Monday morning. He didn’t care about the rules of verb conjugation or whatever was being discussed. He didn’t care that Ronnie was hitting him in the back of the head with spitballs either. “Ronnie Atchison, principal’s office right now,” Mrs. McKissack growled. She looked down and shook her head as she saw the tiny pieces of paper on the floor and a cafeteria straw sticking up out of his shirt pocket. Mrs. McKissack paced back to the front of the class. She paused for a second, looked back over her shoulder at Deshawn then continued on with the lesson. 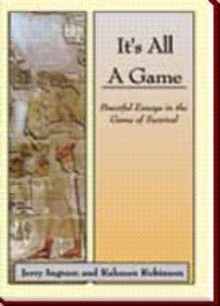 It's All A Game
Jerry Ingram; Rahssan Robinson
£9.16

I WONDER WHY? I KNOW WHY. NEVER MIND! By Jamael McCauley with Jerry Ingram Deshawn is a young African American male who is striving to overcome the harsh realities of growing up in a drug and gang infested neighborhood in St. Louis, Mo. As a child he quickly discovers that life is not always as it appears. He witnesses the pain of death at a very young age as his best friend’s mother commits suicide. Dealing with the death was not an easy thing for him. His teacher Ms. Rice notices a change in his demeanor immediately following the death and he is sent to the principal’s office. The principal suggests that he work in the school library where he has interesting conversations with the librarian. Deshawn’s father is in jail for an unknown crime and his mother constantly gets involved in abusive relationships with men. He often witnesses these beatings and is ashamed that he can’t protect his mother. Before his grandmother passed she always taught him to pray when his mother is getting beat. Therefore, he develops a relationship with God at an early age. Academically Deshawn always excelled in school and his teachers took notice. In junior high his mother enrolled him in the desegregation program. He was bussed from the inner-city to the suburbs to attend school. It was not an easy adjustment as he dealt with racism and feeling unequal to the mostly white population in the school. It was there that his teacher Ms. Rice signed him up for a school spelling bee that he went on to win. Unfortunately, by the time Deshawn reached high school he had began dealing drugs and was involved with a violent street gang.

Jamael McCauley was born in St. Louis, Mo and now resides in the Washington, DC area. He is a graduate of Tennessee State University where he was a sports writer and eventually the Sports Editor of his college newspaper. He also worked in the sports department of The Tennessean newspaper and as a sports writer for The Urban Journal. Additionally, he served as an intern in the public relations department of the National Football League’s Tennessee Titans and the Arena Football League’s Nashville Kats organization. For the past eight years he has worked in the field of social services serving underprivileged youth and families. This will be his first publication. Jerry Ingram was born in Nashville, TN and now presently presides in Orlando, Florida. A graduate of Whites Creek Comprehensive High School and Tennessee State University, he was twice winner of the Society of Professional Journalists award while serving as editor-in-chief of his college newspaper. A founder of Nashville's first "views paper," The Third Eye. Jerry began working at the Tennessean at age 15 and worked for Florida Today for seven years. Additionally, he has worked with both the Boys and Girls Club of America and the "I Have A Future" program at Meharry Medical College. He co-author his first book with Rahssan Malik Robinson entitle: It's All A Game