Treatise of the Ancient Grand Lodge of Khamet 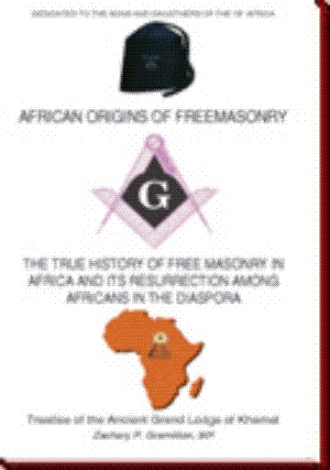 Many Masonic authors have done great and extensive research about their fraternity, yet they cannot find a positive origin for their practices.  Others deny the antiquity of Masonry and try to connect it with the medieval stonemasons.  Many Freemasons know that their society originated not only with the building of King Solomon’s temple, but also with the Africoid people of and the .  They avoid the subject of Ancient African Freemasons altogether.  There was a time in when Black Freemasons who received their Masonic Degrees from Prince Hall jurisdiction would not even be accepted by White Masons as true Masons and brothers and even to this day many White Masons will not open up their lodges to black men.

Are they racist or do they know that the men and women that are discriminated against are the true Masons and Eastern Stars and also the true Shriners and Daughters of Isis?  In some cases the answer is yes, and the true history of the ancient African society is bottled up in the symbols of the lodges ant the literature of its libraries.  Freemasons and non-Freemasons both black and white have held these ideas. Elijah Muhammad, Noble Drew Ali, Martin R. Delany, Albert Churchward, Frank C. Higgins, Godfrey Higgins, George G.M. James, Yosef A.A. Ben-Jochannan, and John Jackson all knew Freemasonry originated in in some form or another

The term Free Mason has many explanations.  Some say that it came from the medieval stonemasons.  It is stated that they were “ Free” to travel the land to work their trade free from interference of landlords who desired to stop serfs from leaving the land.  Some say that it came from the Roman Collegia of Artificers.  Others maintain that the word was invented shortly before the establishment of a grand lodge system in the Seventeen hundreds.  The above statements are partially true, and many Masonic authors have left out the pertinent information of a more ancient origin.

Mr. John G. Jackson (1972) in Man, God, and Civilization researched the ancient philosophies that were practiced by our ancestors.  He even studied some Masonic Sources.  He stated that the term Free Mason was traced back to the ancient Khametic empire ().  It comes from a combination of two Khametic words Phre (the sun) and Mas (a child) meaning children of the sun and/or sons of light (John Jackson, 1972).  These two words combine to make the word Freemason.  The term originated in and proves that the first Freemasons were ancient Africans (called black people in modern racial terms).  It also shows that the order originated in .  Frank C. Higgins also defines Freemason the same as above, and he has it as Phre-Messen (from ) (Higgins, 1923)

As every Master Mason knows great emphasis is place upon the east.  This is the direction in which the sun rises.  And all Freemasons deal with traveling East.  A Freemason is supposed to be an adept or master of the ancient esoteric knowledge of the arts sciences, mathematics and other great aspects of learning of the old world.  Freemasons have kept the ancient knowledge and ceremonies alive within their lodges.  The lodges are places where masons meet, and they (lodges) are filled with symbolism and are symbolic of the mystery schools of the African and African-Asiatic peoples.

One scholarly Freemason named Albert Churchward, a 30th degree Freemason at the time of his writings wrote extensively about Freemasonry and its African origin.  We do not agree with all of Albert Chruchward’s theories, but we admire Mr. Churchward.  He was honorable enough to reveal that the order of Freemasonry originated among Blacks in .  Through his extensive research in anthropology and Freemasonry, Churchward’s proved that the so-called Negro was the original man (called Primary man).  Even though Churchward was a Caucasian, he exposed the truth to Freemasons and others about origins of light (knowledge) and life upon the continent of .  I suggest that all Freemasons and specifically Prince Hall Masons read Chruchward’s work.  Note: His book were written in the early 1900’s therefore a few facts may be displaced, vague, or obscure because Churchward did not have access to the same technology that we have today.  However, inspite of the lack of information Churchward over came great limitations of time along with the criticism of his works.

Churchward (1903) separated the dispensation of time into three distinct parts.  These parts Churchward called the stellar, lunar, and solar mythos and through these time periods ancient Freemasonry developed.  Churchward’s research also reveals that the origin of the mythos (religious doctrine) and Masonry came from early Africans in ancient and the region (source of the )

The Masonic Order is one of the most powerful Fraternal Orders in the world.  Have you ever wondered why?

Why did this order restrict membership to men of European descent?

In this book Zachary Gremillion, Founder of the Imperial Society answers the following questions:

In this book Zachary P. Gremillion, a Master Mason, Thirty-second degree Mason and Shriner deals with the true origin of Masonry in .  Through intense research he traced what he calls the Proto-Masonic order to ancient .  He also deals with the Knights Templar and the Afro-Asiatic knowledge they found at then to be executed, persecuted, and destroyed by the King and Pope.  Prince Hall, Marcus Garvey, Noble Drew Ali and Elijah Muhammad are also addressed.

Zachary P. Gremillion was initiated, passed and raised to the degree of Master Mason in O.J. Dunn Lodge #85.  He also passed through both York and Scottish Rite Bodies of Prince Hall Freemasonary.  Upon studying the teachings of Noble Drew Ali and the Honorable Elijah Muhammad among many, Mr. Gremillion discovered the original roots of the Masonic order came from Ancient Africa Civilizations.  He then began intense research into the philosophy and history of the Masonic order.  Upon reading the works of Albert Churchward and Valentia Straiton whom were Europeans, Mr. Gremillion became convinced that a conspiracy hide the history and legacy of the Children of Ham existed.  He then founded the Ancient Grand Lodge of Khamet which evolved into the Imperial Society based upon the resurrection of the Ancient Cushite Empire of Ethiopians.  He is a loving father and husband, and he encourages anyone to contact him and aid in this mission.