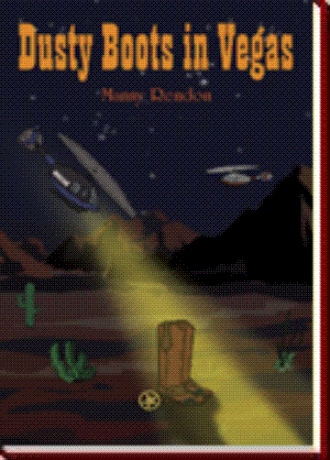 Thump thump.  “Mr. Black, Jon Anders from the Marshals office.”  was already on the way down.  Barry smiled.  Somehow he already knew for sure that this was going to work.  And, and she said she loved him.  He peered over the railing, a brave act considering he was scared of heights, and silently mouthed the words, “I love you too,” and blew her a kiss.

had given him a few quick tips for dealing with Anders, tips she said would work with any cop, and Barry had a few ideas of his own.

This was only the fifth floor, but still a long way when you’re looking down.  shimmied down the rope of sheets and bedcovers, fast.  Strong girl, Barry thought.  Then aloud, “Man, I gotta check out this Kung Fu thing.”

Anders had removed the suction cup from the door before he started knocking so he wouldn’t blow out his eardrums.  The wires were already tucked back into his pocket, his illegal eavesdropping concluded for the time being.

Barry was getting irritated, but she was almost down.  had tied together two king sized sheets and a blanket using a Carrick Bend knot.  Strong knot, unties easily.  Perfect.  A little difficult with a blanket and sheets, but doable.  Only problem was that it would only get her about three stories down, but since she had tied it to the bottom of the railing, it was only about four stories she had to contend with.  Sandy said not to worry, that she used to jump off the roof as a kid and that she knew how to roll.  Whatever the hell that meant.

got to the end of the line and held on with both hands to the last eight inches of sheet.  From the bottom of her boots to the grass was only six or seven feet.  She released, tucked her elbows to her sides, and hid her face behind closed fists.  She kept her legs together, knees slightly bent.  She hit, fell to her side, and rolled her compact body several revolutions down a small knoll, coming to rest face up.

“Uuhhaa,” Barry heard her breath expel as she landed.  got to her hands and knees, a second to recover, and then she was on her feet.  A hurried eye up at Barry, then she was gone.  As he stood there staring down, Barry considered that he had never before met anyone even remotely like her.  I think I’m in love.

He reeled up the makeshift rope so fast it reminded him of those reruns of The Six Million-Dollar   In a matter of seconds he had it piled in the room, then slid the door closed and drew the curtains to cover their tracks.

Thump thump thump.  “Mr. Black, is Deputy Trahan in there with you?”

“That’s a personal question, Mr. Anders, I’m surprised you’d ask that.”  Tip one from .  Barry found the first link and started to pull it apart.

“Deputy Trahan, if you value your job, you’ll open this door right now, while you still have a job.”

“Mr. Anders I’ll thank you not to make a scene outside my hotel room.”  He hustled, found the second knot, and starting working on it.

Deputy Sandy Trahan has grown weary of her overbearing father, retired counterintelligence agent Henry “Hankballs” Trahan, now head of the U.S. Marshal’s Service.  When diamond dealer Barry Black jets to ’s hometown of , he unwittingly sets in motion a team of cutthroats with designs on his treasure trove of precious stones.

After saving his life, skirts lines of propriety when she joins Barry for a drink.  Assistant Director Anders, her boss, indulges his long-standing vendetta when he plots to catch her in flagrante delicto.

The conflict that follows pits ’s loyal and resourceful friends, together with her expert martial arts skills, in a battle not merely to save her career, but the lives of everybody she loves.

Manny Rendon lives in with his 9 year old Black Lab, Misha, and his 11 year old German Shepherd, T-Rex, who was a Valentines Day present from a former spouse.  He is currently working on his second novel.