This is a story about me, Chance Gordon.   It’s a story I tell on this date each year, of how my life was saved by the genius of friendship and the small miracles of everyday life.  And though I may never be the person I was before my accident, I awake each morning with a purpose.  And when I start to feel sadness fill the image looking back at me in the mirror, I think of my friend, Charlie Robbins.  I am telling you this story today simply because he gave me the chance.  Charlie has been my best friend since we were knee high - but don’t let me get ahead of myself.

Today I sit at the place where I was reborn.  An old oyster shack sitting on the banks of a river may not seem to be the best place to start life over, but for me it was a salvation.  I still come back here every morning.  There’s a peacefulness in an early morning sun, a cool breeze through the marsh, the aroma of salt in the air and a cup of coffee that combine to make you sense a new day and another chance to rectify your mistakes of yesterday.  I watch the fishing boats trudge slowly out to sea, becoming smaller until they disappear into the sun, as if it were calling them home.  A few eager seagulls joyfully sing as they follow the boats, excited about another day of swindling fish from the rising nets.  Small waves gently collide against the concrete dock upon which I sit, as hundreds of small fiddler crabs hurry back and forth into their holes, timing their pace perfectly with the tide.

There’s not a more peaceful place on earth.

Charlie and I used to come here as kids.  We had a ritual each day:  We’d walk down to the E-Z Check and buy a Soda Pop and a bag of peanuts.  We would then come back here, sit on the edge of the dock and let our legs dangle in the water below.  There was nobody here to bother us, as all the fishermen were out in the river catching whatever was in season.  There were clams and shrimp in the summer and oysters in the winter.  Charlie and I would talk for hours, eating peanuts in our sodas, throwing shells at the scurrying fiddler crabs and occasionally taking a nap in the warm sun.

The afternoon was always an exciting time.  The fishing boats would come in, tie themselves to the dock and unload their catch.  Charlie and I got paid for carrying the bags to the house.  We also shared the same grandpa, who happened to own the place.  This allowed us a lot of freedom, making it the best job around.

I’ll always remember one late afternoon when Charlie and I were here trying to hit fiddler crabs with our BB guns.  There was a hunter sitting out near Crab Point waiting for the ducks to fly in for the evening.  As a flock flew out over his head we watched as they got closer to us.  The hunter stood in his skiff, aimed his shotgun, and squeezed off two shots.  For a second all was quiet; then a few yards away on the riverbank we watched one duck fall at the edge of the water and another fall twenty feet behind it.  The duck at the water’s edge didn’t move.  The other duck was obviously injured but able to get up and flap its wings wildly until it suddenly stopped and looked down the bank at its mate.  It flopped the short distance to the lifeless duck and as we watched in amazement, it sat beside its mate and wrapped its good wing over him.  Charlie and I stood there for a while until we saw the hunter make his way to the shore to collect his kill.  By the time he got there both ducks were gone.  Charlie rushed the injured duck back to his house as I buried the other near our sitting spot.

Charlie kept watch on that duck day and night.  I remember his dad saying there was no way he would ever get a wild duck to eat, but Charlie didn’t listen.  Charlie showed up at our grandfather’s steps and said, “Gramps, we’ve gotta save this duck.”

Gramps looked down at the tears in young Charlie’s eyes and gave his typical saying, “Let’s see what we can do.”

It took two weeks to mend that duck.  Charlie nursed her, exercised her wing, and never lost faith that she would fly again.  That duck bit him so many times that he wore bandages around both hands - but he never swayed.  Charlie kept that duck on course the entire summer until early one Saturday morning, as Gramps and I watched, he let her fly away.

Charlie gave that duck a new life.  He would one day do the same for me. 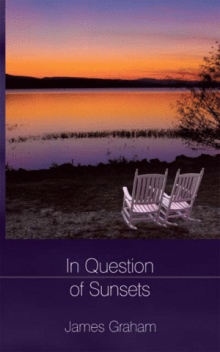 In Question of Sunsets
James Graham
£12.49

Every once in a while a story is told that, at least for a moment, changes the way you look at life.  Finding Life is that story.  It is an ageless and timeless tale of a glorious life destroyed by an unforgivable mistake, and the small miracles that turn the impossible into hope…

After buying into the ways of the world, Chance Gordon commits an unspeakable sin – one that destroys the souls of himself and the love of his life.  Buried deep in a sinking depression that isolates him from the world, it takes the small miracles of a faithful Grandfather, a desperate friend, and an innocent child to bring hope and an impossible journey to find life in the ashes.

James L. Graham has published dozens of articles with a unique combination of science, medial research, and inspirational elements.  He has a background in both the science and healthcare professions.  He lives with his wife and family in .