Merci, Bonjour and Much More

How art became one man's passion in France 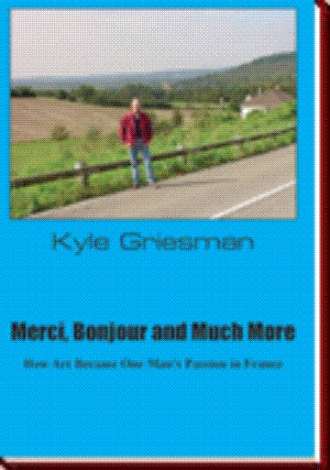 As always seems to be the case in , I was entertained by yet another study in human nature. The line to get into the museum had wrapped around the corner and extended halfway down the side street I was on. Out of nowhere appeared an Asian man armed with at least 25 umbrellas he was selling. I watched him sell out in minutes and then return with more. It is amazing how enterprising people can be. A bit of advice, always take an umbrella to as it does rain quite often. I have experienced clear skies for a week straight and rainy skies for a week straight. This week was turning out be the latter.

Another half hour passed and the rain finally changed to a light drizzle, so I paid my tab, thanked my waitress profusely, and headed to the R.E.R. station for my ride back to the apartment.

I boarded the train and was feeling pretty proud of how well I had negotiated on my first big solo journey. I was reading an art book and paying no attention to anything or anybody when the train made its first stop. I heard an announcement in French but didn’t pay any attention to it as I couldn’t understand it anyway. For some odd reason, I also didn’t notice that everyone had exited the train except for me. The doors shut, the lights went off and the train rolled into the tunnel moving at somewhere in the vicinity of 1 mile per hour. I found myself sitting in a pitch black subway car, in a tunnel underneath , all alone. Luckily, I had my cigarette lighter on me. I clicked it on and walked to the door where I pushed the intercom button over and over with no response. I was saying things such as “ Help !!!, “I’m stuck on the train”, “Is anybody there?” and finally “ Hello, I’m an idiot tourist who doesn’t understand French and I’m stuck on this damn train, GET ME OUT OF HERE !!!!.

I received no response at all. Then, I pushed the emergency alarm which didn’t work. I remembered that I had noticed trains parked on tracks which run adjacent to the tunnel walls on many occasions in the past. I always assumed that they were taken out of service awaiting some type of repairs. Knowing how the French work, I also figured that these trains could quite possibly sit for weeks before anyone got around to working on them.

I then tried to calculate how much room I would have between the wall and an oncoming train if I ended up stuck in the tunnel. I figured that it was now a distinct possibility that I would have to walk through the tunnel to the next stop and pray that I wasn’t crushed to death. I really wasn’t satisfied enough with my calculations to take this risk. I knew that the metro shut down around so I began preparing myself for a long, dark, lonely wait.

The train was still moving at a painfully slow pace when all of a sudden it came to a station. Good news, you think? Think again. The train from hell rolled right through the station and back into the tunnel. At this point I only had two wishes. The first was that my lighter didn’t run out of fuel and the second was that the train would just keep rolling all the way to the end of the line. I figured I’d be able to get off at that point.

In September 1998 Kyle Griesman departed for .  Six years and eight European trips later, his life has been drastically altered.

Interspersed with his irreverent and unapologetic humor, Merci, Bonjour and More chronicles two of these sojourns to .  You’ll experience how it feels to be stranded in a tunnel on a subway train alone in the dark.  Kyle explains why he never carries large denominations of cash.  It seems no one can make change for you.  You’ll see what it’s like being evacuated from your hotel room in the middle of the night due to a fire.

Among others, you’ll meet an 87 year old woman in who befriended Kyle while painting on a cold windy day in her village.  He introduces us to a group of artists that he painted with and roamed the countryside with.

While turning obstacle after obstacle into adventures he embraces the people, the culture, and the wonders of .

He has worked as a radio disc jockey at numerous stations, for major corporations, for banks and credit unions and as an artist.  He has shown and sold paintings in 6 countries and currently is represented in , and where he has traveled and painted extensively.  He currently lives in the metro area with his wife and son when not roaming the beaches of or the streets of .  This is his first book.