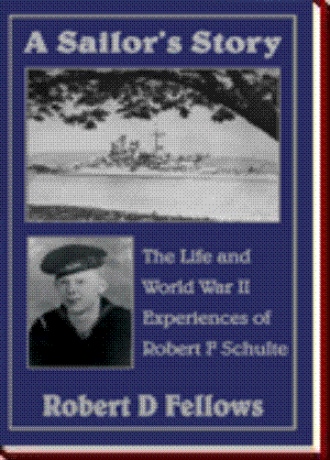 Now while in we had our short-range gunnery practice, and after that we were ordered to go to , for the holiday, which was Labor Day.  Anyway, they had not seen a battleship since World War I so it was a big treat for them to have us in there and also help their economy a little bit for the few days that we were going to stay there.  After the holiday, we got underway and we thought we would be returning to , but it didn’t happen that way.  Later on in the afternoon while at sea, I was down below deck for some reason, and one of my shipmates was topside and he called down the hatch for me to come on up topside and look at all the ships.  I looked up at him and I said, “Haven’t you seen ships before?”  He said, “Yes, but not this many.”  So I went up to see what he was talking about.  And horizon to horizon you could see nothing but ships.  There were supply ships, transports, everything.  It was a convoy of Lend Lease material that was headed for and .  Well we fell in with them and we proceeded, zigzagged courses and such, and we headed north through the .  We got up around, I think it was north of , and we started having submarine attacks.  German U-boats were trying to get at our supplies, sinking the supply ships and what have you.   It seemed to be every morning just before daybreak and every evening just at dusk, we would have these U-boats trying to get into the convoy and attack the supply ships.  Fortunately, they did not fire at any combat ships, although I do remember being on deck one time and seeing a torpedo crossing our bow but that was the last I saw of it.  I was sure glad it didn’t hit us.  We proceeded further until we got closer to and the English fleet came out.   Not their whole fleet, just their escort ships who took the Lend Lease material that was bound for .  The Russians showed up with their escort ships, and they took the part of the convoy that was for them and took it on into .

After that we proceeded into .   We stayed there off and on for a while, where we would go to sea and patrol.  What we were doing, much as I can determine, was hunting for the Germans pocket battleships and their other bigger ships that had been harassing the convoys and sinking as many as they could.  This particular time we were patrolling at sea and we put back into .   We were lying at anchor in , when a couple of English ships came in.  One was a small carrier and the others were cruisers and destroyers.  They had reported that one of their observation planes had spotted surface ships, pocket battleships in the straits of .  They wanted us to go out and go up through the straits of and they, after refueling, would go out and come down through the straits of so we could bottle these surface ships up and be in combat with them.  However, we were not even in the war at this particular time, but we still went into the straits of but the only thing we spotted were icebergs.  With the hazy atmosphere there, an iceberg at a distance would look almost like a big ship with the superstructure and everything.  However, we never did meet up with any of them.  Later on, we returned to but we still had a few sh

Sinking German U Boats doing convoy duty aboard a battleship in the prior to the start of World War II and ending with Kamikaze attacks while landing troops with an LCI at in the covers the scope of this book.  Included in between are the bombardment of , , and the invasion of the early in the war.  Landings at , , and are also included.  The book begins with a nostalgic look at growing up in a medium size mid western city that brings back a lot of memories to Baby Boomers and ends with everybody’s idea of the ideal retirement.

Robot Fellows was born at the beginning of World War II and grew up when defending our country was still considered an honorable profession.  The military was held in high esteem as portrayed in the John Wayne type movies such as “Sands of Iwo Jima”.  This kindled an interest in World War II history which has become a life long search for information.  Having an uncle, Bud Schulte, featured in this book, whose life covered many World War II Battles, fueled his desire to complete this book to document those experiences as well as honor his Uncle, who spent the war as a Chief Boatswains Mate in the navy.