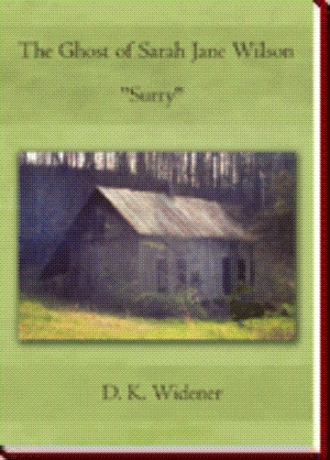 ......Zack rode in to Sol Brownings yard and sat in the saddle surveying the situation. About fifty feet away, straight ahead, stood a shack that no doubt was where Sol lived.  There was a branch with a trickle of water running in it, then came a cauldron of boiling water.  It looked like Sol was cooking something.  To his left, Zack saw a rack of red oak wood that was being used to keep the fire going under the cauldron.  At the end of the rack of wood, he saw a naked human foot.  He reined his horse around so he could see behind the rack of wood. He was looking at a man that had his chest slashed open from his neck to his crotch.  He had found John Shelton. Suddenly, the door to the shack flew open and out came a man on all fours, barking and yelping like a dog. “This must be Sol’s son” he thought for Sol came storming from the shack, kicked at the boy. “Get back in the house to mangy hound.” The boy yelped and obeyed.

“What do ye thank uv the shoat?” ask Sol. He’s a biggun ain’t he?” Sol was referring to the to the man behind the wood pile.  Did he really think this was a hog he had laid out?

Insanity...Zack had never seen such insanity in all his life.

“I got the heart and liver there cooking fer me and the boy.  Ye be welcome to join us iffen ye like. There’ll be plenty.”

There was no way of knowing how many folks Sol Browning had murdered and eaten since he had lived here.  Zack wheeled his horse around and headed for the tunnel road. When he got there, he turned left and headed for Williamsford as fast as his horse could run.

“The sheriff just has to come and put a stop to this madness.”

Zack Webb had been abandoned when he was just a baby and he had been raised by Grandma Sally and Clayton Leon Rickett. That is, until he became fifteen and was coaxed into joining General Lee’s confederate army. Now, after four years of the war, he was coming home.The last twenty miles of the trek had to be walked. About ten miles from home, he met the Ghost of Sarah Jane Wilson and his life would never be the same. A little barefoot girl with a green dress that had yellow flowers. She would mold his life from there on.

So come ride with Zack as he takes a stand against a bunch of cut throats who didn’t think the war had ended. The only law in this God forsaken land, was the law of the gun. He who had the fastest gun, was boss. Stand beside him as he faces the fast gun of the mob. Be with him as he fights wolves and other beast that would threaten his family.  Work with him as he and his family  work to carve out a plantation from the forest.

Zack Webb had been abandoned by his mother when he was no more than a week old. She placed him among some quilts that were in Clayton Leon and Grandma Sally Rickett''s wagon. Not knowing what to do with the child, they took him home gave him a name and rasied him as their own.

When he was fifteen years old, he joined General Lee''s confederate army. But now he was going back home and everything would be good again. Or would it?

Some men marched home from the war to find their homes or farms burned out and their family gone. Some of the wives, being left alone, packed what they could carry and went back home to their fathers house.

So, the men became angry and become lawless. Many of them caught on with a wagon  train and went west to become gun-slingers and outlaws.

But Zack found his home to be just  like he had left it and at the tender age of nineteen,  he hoped to make a good life and forget about the war. But that would not be an easy task. Trouble came at him from every direction.

I was born , the night Joe Louis defeated James J. Braddock for the worlds heavyweight boxing championship. I’m sure my mother must have felt like she had gone a few rounds with Mister Louis before the night was over.

I was the second of five children, the first born son.  The nearest doctor was about twelve miles away, so my mother never once went to a hospital to give birth to her children, but there was an old lady, everyone called her Granny Stewart, who delivered most if not all of the children within a ten mile radius. As midwives go, I guess she was probably one of the best. I’ve never heard if she ever lost a patient.

We grew up in a community called “Meadow Creek” about three and half miles from the little , I attended a one room school, , until I finished the sixth grade. After that, I had to ride a bus to Rockholds if I was to further my education.  This would be the first time that I ever rode a bus. Many of the students that attended Coffey were so intimidated by having to change schools, that they ended their education at the sixth grade.

I now live in with my wife. My son and his family and my daughter also has moved to . But I miss the old time way of talking that a lot of the old folks still use.  This is my first undertaking of writing a story. I hope everyone likes it