by Robert A. Boots 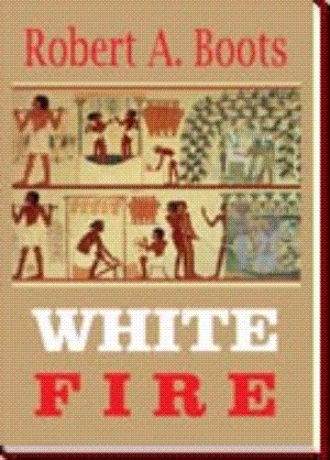 White Fire is a book that literally had to be written. To say the author was commanded to write it would be an overstatement---but not by much. While meditating one morning, he saw himself sitting at a table strewn with papers. A tall man walked up to him, lay down a black pen, and said, “Write, it’s important.”

Using black pens, he wrote a story six long, legal pads in length. That was the beginning of White Fire. He didn’t realize what was so important until he had to organize all that had happened to him into some sort of cohererency. It was important that he make some order out of his white light and out-of-body experiences. To say nothing of the ongoing dreams he was having. White Fire is visionary fiction, meaning there is much truth woven into a story line. He couldn’t write it as truth because he thought no one would believe him so fiction was what he chose. But the words of Talva, the herb doctor, Rocking Bear, the Hopi Master, Pan, the CEO of Nature and Isis, the first daughter of the Ancient of Days may be taken as truth. They come from the book Morals and Dogma of the Scottish Rite Free Masonry, the Gnostic teaching of the Nag Hammadi Library and the personal experiences of the author. White Fire offers simple truths that are needed today for the times immediately ahead of us.

I’ve had most of the spiritual experiences written about in this book. These ‘white light experiences’ are hard to explain and impossible to define. Some are like powerful dreams, vivid beyond words. Some come in a meditative state that puts one into overload until they have had time to assimilate them. Some are out of-body-experiences and some are near-death-experiences. All have at least one common denominator---they are life changing. They change the way you think, the way you live, and your values. The facts that they change things are obvious proof of their existence.

I would be very much at home in a White Fire environment.  But, certainly, not at the beginning of my life. I was born in in to an Ozark hillbilly couple. Arthur A. Boots, my father, was descended from the five brothers who came to the new country from . I strongly suspect that the British Boots Pharmaceutical may well be some of my kissing cousins.  Ilda, my mother, was a Quinn. One of ‘them coon huntin’ Quinns from over to Pennytown, about a mile up the railroad track from Bagnell.

Granddad, Oscar Boots, had a steam boat on the that he hauled freight and railroad ties to and Tuscumbia. He didn’t have a still on it, but probably wished he had. When he wasn’t busy with that, he served as the ferryboat across the Osage, where there was still some feuding going on.  He charged ten cents a head and that was high priced but, that was round trip.

When the Bagnell Dam, that backs up the , was built, it ruined boating on the river so Granddad started the first silent movie in Bagnell, piano player and all. Dad brought Bagnells first electric lights. He got a small generator powered by a gasoline engine and hooked up a few houses with it. People came from all around to see the lights.

Humble beginnings? ---Long ago? I guess! Like all things there is an up and a down side to it. We lived close to Nature and all my life I’ve had deep appreciation and an awareness of natural things. This is apparent in my interest in Pan and Nature Spirits.

On the other hand, being reared in a village in the Ozarks by hillbilly parents and in a larger family of hillbillies, I carried with me for years a very limited view of the world, a certain naiveté that was a part of my character. I still have some of it left, if I looked closely. I am by no means saying it was all bad, just limiting. By limited I mean that my values and focus of attention were primarily on money, sex, alcohol, status and prestige. Yes, I could add cigarettes to that list. That was all I knew and it was what I grew up with. That’s what I did.

I received the greatest gift from life I’ve ever had on the night of . My addiction to alcohol was taken from me. The white light of spirit entered my consciousness and a voice said, “Quit or die.” I still have some trouble calling it God, but it was without doubt ‘a power greater than ’ I chose to quit. There were two other events happened after this. This was over twenty years ago at this writing.

This was a life changer, a value changer, and an ego humbler. When spirit intervenes consciously, it is a powerful, never forgotten experience. It is always a positive event, however to some who resist it can have negative effects. It is the resistance and not the experience itself that cause these negative experiences. The difference between higher consciousness and lower consciousness is nowhere more vividly illustrated than in these cases. Carl Jung explained it best for me when he wrote, “If we understand and feel that here in this life we have a link with the Infinite---our desires and attitudes change---.”  In my case, nothing could be more true.

Everything changed---desires, attitudes, values, ego, worldviews and me. All of the old belief structures were useless now and I had to rebuild some new ones that would fit into my wider awareness. I had to open up and expand my old concepts of life before it would fit in with the new spiritual knowledge that I had gained. I had to balance the certainty of the existence of a spiritual world and my physical values.  It was neither simple nor easy for me.

Shiian’s obsession to find the mountain of colored winds is a reflection of my own search for the higher consciousness that came to me that night. To my knowledge, not a day has passed since that I haven’t made an effort to know more---and to understand what I did know. I’ve gone to every psychic and channeler that I ever heard of. I’ve attended Unity and Science of Mind Churches and all the many psychic movements I knew of. I’ve sifted through hundreds, if not a thousand books, both old and new, in search of my truth. Most of which came from the old Gnostic teaching from the Nag-Hammadi Library and the Morals and Dogma, a book from the Scottish Rite of Free Masonry.

I haven’t achieved the break through that Shiian did on her mountain of colored winds. However, from my current studies of The Pathwork Lectures by Eva Pierrakos, and from my dreams and feelings, which I believe are important to my understanding, I know that conscious contact is there---not just for me but also for all of us.