Who Sendeth Him? Who Giveth Her Away?

Dating is of the Devil! 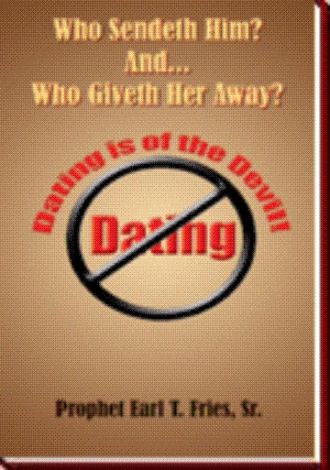 This book was birthed out of my concern for the ungodly relationships that have altered the prosperity of the church, the government, and the nation.  God has begun to deal with me concerning the tragic fruit produced by ungodly relationships, that I might shed some illumination on the problem and provide a solution from God’s perspective.

We are living in a society where only the mind of God can restore the health of God’s people to its original state. There are so many things that have happened to distract the people of God from the God kind of life, the Zoë.  Distraction is a measuring rod for failure.  The more distracted we become, the more likely we are to fail. The enemy has a serious endeavor against the people of God and is working overtime to sabotage the institution of marriage and the family structure.

This is a serious deception from the adversary to cause the church to have a sleepy awareness of this epidemic that is all around us. Yet, we seem to be unaware of this tragic condition that has brought on bastard children, unfaithfulness, disobedience to leadership and parents, deadly sexual diseases, murder, confusion, backsliding, a form of Godliness, and generational curses.

The church has not made the statement as to what is right or what is wrong concerning Godly relationships.  Sadly enough to say, many of God’s men and women have not addressed this serious problem.  It seems that Even though there is so much good preaching and teaching, this area of developing Godly relationships seems to be an area that is not important.  Prosperity teaching has consumed the pulpit and yet, we see the family structure and marriage according to God’s way has become a joke.

God has laid this concern upon my heart to shed some provocative light on this issue so that the body of Christ might be restored to its original state, where marriage, family and true communion is exhibited in the body of Christ and society.

We pray that after reading this book, you will be provoked by the simple application of God’s word to Godly relationships from the ’s perspective.

Where Do We Start?

When we begin to look at the problem, God always gives us a basis for seeking truth. We need to look at Genesis, the first God kind of relationship between man and woman.

GENESIS 2:7&8 And the Lord God formed man of the dust of the ground, and breathed into his nostrils the breath of life; and man became a living being.  The Lord God planted a garden eastward in , and there He put the man whom He had formed.

We believe that God here represents “Father.”  We truly believe that a healthy Godly relationship does not start with just two people but it starts with a father with Godly insight. Notice, he breathed the “Zoë,” the God kind of life, in his son Adam and Adam became a God-breathing, God-walking, God-fearing, mentored by a Godly father.

We need to understand that a father must have the mind of God concerning preparing a son or a daughter for the Godly relationship.  Verse 8 says the Lord God planted Adam.  This shows that prior to any type of involvement with the opposite sex, a son or a daughter must first be mentored from the breath of the father and placed in a position. The son must have his own dwelling or the financial means to obtain a place to live before pursuing a relationship.

Notice the 15th verse: Then the Lord God took the man and put him in the Garden of Eden to tend and keep it.

God gave his son the job of tending and keeping the garden. Economics first, then love.  This is truly the mind of God concerning a Godly relationship.  Economics is the blueprint.

Who Sendeth Him and Who Giveth Her Away is a product of countless hours of counseling sessions with frustrated, perplexed and traumatized Christians, who enter into relationships without the blueprint of God’s plan.  Prophet Fries boldly addresses the problem of failing relationships in the body of Christ, providing practical and spiritual insight, as well as a solution to this disturbing trend.  This book is a must read for anyone contemplating or already in a relationship.

Prophet Earl T. Fries (pronounced “frees’) is truly an end-time prophet for the hour in which we live. He has a clear revelation of the heart and mind of God concerning the principles of God as it relates to order, authority and Godly relationships.  He is well known for the wisdom that is evident in his teachings of the Word of God through divine revelation.  Through the simplicity of the analogies that he so vividly presents, his message is easy to interpret and understand.

Prophet Fries is a family man whose household portrays the revelation of his teaching concerning the home.  His wife, Elder Annie B. Fries, is his strongest supporter, standing by him as he ministers and teaches men around the world how the husband should love his wife.  His desire is to provoke and arrest the attention of those who are seeking the success and prosperity of God’s plan concerning building Godly relationships.

He is in great demand both nationally and internationally and travels extensively carrying the message and facilitating seminars concerning leadership and authority.  Some of his missionary journeys include East Africa, South Africa, Zimbabwe, Guyana, Mexico, India, South America, and London and across the United States.