PREPARATION OF THE NEW GENERATION OF SOCCER PLAYERS 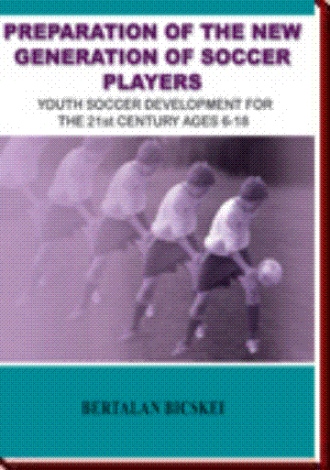 1. On age-group training  in general

When discussing age-group training we always think of the training and development of young footballers between the ages of 6 and 18 who are developing. What is development? Development is a forward leading process which has a beginning and an end. This process is divided into definable sections between the beginning and the end. It is important to examine this issue as the concept of development is also valid for the human body and indeed can also be applied to the different organs and organ systems. Thus the development of the human body and within this the organs and organ systems is also a developmental process occurring between two points in time, usually separated by a period of years, which can be divided into distinct sections. It must be stressed that the level of the various physical abilities, and technical and tactical levels of knowledge are closely related to the degree of development of one or more organs or organ systems. Let us look at which organs and organ systems are related to which physical abilities and the learning of technique:

special stamina – the lungs-heart-circulatory system, the bone structure and the muscular system;

strength – the bone structure and the muscular system, the sex-hormone system;

skill and the possibility of learning techniques (technique as a special skill) – the nervous system and the individual’s ability to learn movement;

Once we know the connections between the various physical abilities and the process of learning techniques and the organs and organ systems, the question arises when each ability should be developed in the knowledge of these. In theory the answer is simple. Every organ and organ system has a period between the ages of 6 and 18 when it undergoes a dramatic change in terms of quantity. We have to be aware of this period, which often lasts for several years, and we have to highlight the development of the physical abilities related to the given organ and organ system as well as teaching the techniques in this particular period. These periods are as follows:

the lungs-heart-circulatory system between the ages of 10 and 16;

the bone structure and muscular system, the sex-hormone system between the ages of 14 and 18 (here the leg muscles are an exception, which start developing earlier, from the age of twelve);

the individual’s ability to learn movement between the ages of 6 and 14.

FIGURE 1 THE APPLICATION OF AGE-GROUP TRAINING

So age-group training means that different abilities need to be given emphasis in the development of young footballers between the ages of 6 and 18 within the different age-group limits, depending on the degree of development of their bodies. These times can naturally coincide or overlap each other for a certain period. At the same time, age-group training means a variety of training which extends the limits of the later development of the players. Age-group training and varied training are in the best possible harmony with each other and special training. Varied training is between the ages of 6 and 14 when the children in the course of physical education in school get to know the basic elements of floor exercises, exercises on apparatus and various ball games, such as handball, basketball and volleyball. Examples of basic stamina development between the ages of 10 and 16 are swimming, middle and long distance running in athletics, and generally following any other sport in the long-term.

I had an interesting experience when training the national youth team and later Hungarian first division footballers, which has also been supported by surveys. Those footballers had by far the best basic stamina who in addition to playing football, had also swum, did athletics, or both when younger, even if not on a competitive level, but at least by going to regular training. These excursions into other sports will reap a profit later when the footballer becomes an adult.

A very important basic rule of age-group training is that it is not possible to train 8 to 10 year olds in the same way as 14 to 16 year olds or adult footballers. Young footballers must go through all the stages of age-group training. If they do not do so and a stage is left out, physical abilities cannot or can only to a small degree be developed as an adult footballer and technical elements cannot be taught at all. In football today footballers with an inadequate training play the whole of their careers at a disadvantage that is impossible to overcome. They will not be able to show the abilities concealed in them to their full extent on the field.

1.2. What is the connection between age-group training and physical education in schools?

Physical education in school has the task of assisting the bodily development of the pupils. This curricular training, with the exception of underdeveloped countries, is prepared throughout the world by taking age-group characteristics into consideration. If schools performed this task of theirs correctly and purposefu

As the title suggests, this book, written by “Master Coach” Bertalan Bicskei, deals with Youth development, and is one of the most comprehensive, in-depth soccer training manuals ever written on the subject. In each of the eight chapters there are numerous sub­sections illustrated with tables and diagrams that cover all aspects of technical and tactical development of the young soccer player, It evaluates previous works, training methods, and presents various NEW approaches for training different age groups.

According to master coach Bicskei, the young soccer players must be trained differently than adults because physically, psychologically and in muscle development they are going through the growing process, while at the same time we have to differentiate between age groups as they reach different levels of development. The various human organs and systems do not develop in harmony. Each has it’s own periodic, multi-year growth cycle, when suddenly it reaches maturity or begins to develop to a higher level. The trainer must study and fully understand the status and precise point of the multi-year development cycle of the organs and systems because they must emphatically promote these precisely connected physical abilities with the multi-year development of young soccer players.

In the Bicskei youth system, everything is related and connected to everything else, and it is logical to conclude that if the systems are not fully developed at different stages of growth, and the educational and training application is not correctly applied in a timely manner, the ability to learn technical and tactical elements is greatly hindered.

Bicskei Bertalan was born on in . He is married and proud father of three grown boys. When not on a coaching assignment abroad, he resides with his wife in . As a former professional soccer player he played for several top clubs in , including the highly popular side, Ferencvaros FC. As a youth player he was frequently member of the National youth select teams, and he also played on the National select teams of .

After concluding his playing career, he attended the Physical Education University of Budapest where he earned a diploma as a soccer/football coach. In 1986, he successfully completed the highly esteemed “Fussballehren Lehrgang” soccer Institute in , while he also studied the history of philosophy for two years, in . He speaks moderate English and fluent German.

As a coach he worked with top-level Hungarian youth teams for 10 years. From 1977 to 1982 he was coaching director for the MTK FC First Division Youth Program. During this period 20 youth players successfully signed a pro contract with the first team. From 1982 to 1986 he worked for the Hungarian Soccer/Football Federation as coaching director for the U-16 through U-21 select teams. In 1984, under his direction, the Hungarian U-l8 select won the European Championship in . During his 5-year tenure as Youth National Team coach he discovered many talented players that moved on to the professional level and became famous National team players. During the 10 years he worked with the youth programs in , he regularly participated in coaching seminars and wrote many articles particularly about youth soccer development. After this period he worked with many First Division professional teams in and abroad. In 1987/88 Honved FC of won the Hungarian title and was a finalist in the Hungarian Cup competition. In 1989/90 he was coach of the Hungarian National team, and in 1991 coached the Daewoo Royals to the Korean national championship title and won the Korean Cup. He was voted Coach of the Year in . From 1992 to 1994 he worked as coach in and then returned to to coach in the first division until 1995 when he accepted an offer to coach the First Division team, Al Read in . During this period he frequently attended coaching seminars and lectures in and always striving to learn and study the youth programs of leading soccer nations of the world. While in he started work on his book, “The Preparation of the Next Generation of Soccer Players” which was completed and first published in in 1998 the same year he was selected to coach the National team of for the second time. In the past few years he has traveled the globe, coaching in the Chinese first division in 2001 and in in 2003, while he attended soccer seminars and lectured in many countries, including , , , and the .

In 1997 in recognition of his work in development of soccer, on the recommendation of the Hungarian Soccer/Football association he received the title: “Master Coach” from the Hungarian Ministry of Sport.