by COMPILED AND TRANSCRIBED BY HEATHER MCFARLANE 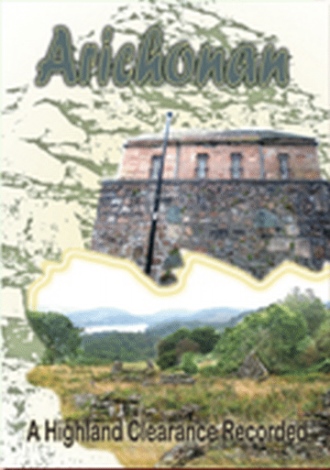 I have just had a call from MR. MARTIN (Poltalloch’s Factor) and MR. MCKAY, the Superintendent of Police, who communicate some very serious proceedings that took place on Poltalloch’s lands in the parish of yesterday.  - A Sheriff-Officer named GILLIES and some concurrents, having gone to the farm of Arichonan last week to eject four small Tenants of Poltalloch’s by virtue of a warrant of this Court, were met by the tenants and their families and threatened with violence if they attempted to enter a single house.

The officer went and informed MR. MARTIN of what occurred, who wrote a full account of the particulars to MR. WILSON here with whom I had a conversation and recommended that a portion of the constabulary force should accompany the officer and also all Poltalloch’s Gamekeepers, Ground Officers, and all others that could be procured to assist.  For this purpose, I gave Mr. Wilson a Note addressed to COLL MCKAY, stating that, understanding what had occurred, I recommended to Mr. McKay to send such of the Police Force as were most conveniently situated, along with the officer to assist him in carrying the warrant into due and lawful execution.

Captain McKay accordingly accompanied by 9 officers, and Mr. Martin, with all Poltalloch’s servants, Ground officers and from 25 to 30 in number, making in all a force of nearly 40 men, went yesterday to Arichonan to eject the four tenants, when they were met by threats and abuse.

The Tenants dispatched messages immediately to the neighbouring farms and hamlets for assistance, and in a few minutes, about 100 grown men and women assembled, all armed with sticks and stones, who stoned the Police and their party, many of whom were very much hurt.  Mr. Martin (sic) received a severe wound near the temple with a large stone (sic.  Really John Stewart), and he was immediately afterwards knocked down, struck and dragged by the hair, and it was only by the exertions of his own party and the Police that he was rescued, as there seemed a determination to direct the greatest part of their violence against him.

The Police succeeded in making five of the ringleaders prisoners, and with great difficulty and danger, brought the Prisoners to Ballenach Inn, two miles from Arichonan.  Here, the crowd followed them, and had increased to 200.  Mr. Martin saw they could not possibly be brought farther without their being rescued, and he arranged to take a Bail-bond from two persons for their appearance for a small penalty.

This book highlights one violent summer in on Argyll village.  In doing so, it reveals the forces that ensured the death of the way of life.

In 1848, the landowner terminated the leases of four tenant farmers in Arichonan.  To the surprise and fear of Argyll law enforcement, the people in this hilltop village did not peacefully leave their homes: they mobbed and they rioted.  Moreover, they were joined by 100 to 200 people from the surrounding area, who harassed the police officers trying to enforce the “Summons of Removing.”

A handwritten record of the subsequent legal process lies in the National Archives of Scotland.  This book includes a complete transcription of those papers from earliest evidence to final sentences.  Every person mentioned is listed alphabetically at the end of the book.

Part Two compiles indexes of Arichonan’s landowners from 1643, while “people who lived there” is the focus of Part Three.  Parish and census records; a 1798 Estate Inventory of buildings and people; interesting wills; a list of Parish ministers – all have been organized and combined in one book to shape a complete picture of 1848 Arichonan.

Serious historians and genealogists interested in Argyll will enjoy this book.

Heather McFarlane is a Canadian descendent of Argyll Highlanders.  A Bachelor of Arts in both History and Philosophy, she has come to ’s history via an interest in the various primary materials relating to her ancestors’ world.  Of her family tree, the Campbells and the Langs lived within 15 miles of Arichonan during the summer and fall of 1848.