Andy as I Knew Him 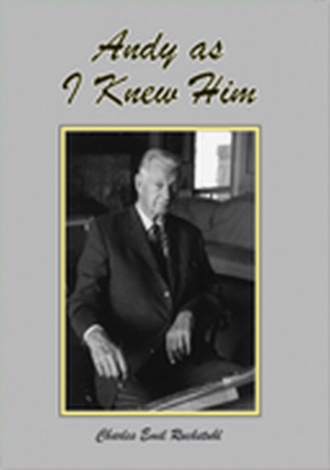 I wish that everyone could have experienced the high spirits that permeated life in back in 1927 when I first knew “Andy”, C.W.Anderson.  Although I was only nine years old, I witnessed and remember a time when the whole human race seemed to be on a roll toward Utopia. The era of heady possibilities had begun around 1925 and continued one giddy day after another until the stock market crashed in October of 1929.

Meanwhile, redhead Clara Bow, the flapper of flappers, dominated a lively Broadway that echoed the music of the that had become the rage along with knee high skirts.  Speakeasies were everywhere and the popular highball at parties was bathtub gin and ginger ale.  You didn’t have to be a millionaire to afford a drink - alcohol was tax-free and no one was looking.  Carrie Nation was history.

Nestled among the narrow streets of Greenwich Village were two outrageously successful speakeasies, The Pirate’s Den and The Blue Horse, both owned by a fellow named Don Dickerman who hired a little known collegiate musician from “down-Maine”, complete with megaphone, to play at the Pirate’s Den.  Rudy Vallee was an instant hit and soon became renown with his “Connecticut Yankees” band.  In these early days, before Victor signed him up for good, Vallee recorded on Harmony records as Frank Mater.

Dickerman owned a camp on up near .  It wasn’t the kind you might think: there were no children.  The patrons were friends of camp owner Don Dickerman, wintertime habitues of the Pirate’s Den and the Blue Horse.  is where our story begins.

Alvina had returned to the considerably earlier than Madeleine who didn’t especially want to come home.  Her affection for my father, her ever-providing husband, had long since ceased and my term at Ecole Ile de France wouldn’t be finished until December, an excuse for Madeleine to see a little of by herself.

Fate interrupted the stay in when Madeleine, who had decided to return to art class, fell off a stool, and detached a retina in her left eye.  The accident commanded a quick return home just before Christmas, 1925.  Now partially blind, Madeleine had no choice but to go home.  That was the end of more than a year in , a period during which I began to speak only French.  It had taken me four months to make the switch to French, and on my return to the , another four months to change back to English.

Alvina, who had been in art school in with Madeleine before , was happy to have her back stateside.  Alvina had met Andy a year or two earlier.  It so happened that her new husband, Paul Ickes, a friend of Don Dickerman, had made plans for the summer of 1926 that included a stay at .  The newly weds thought it would be great sport to invite Madeleine to the camp so she could make some needed new friends.  Her entourage was limited after 18 months in and what they thought was her somewhat restricted life: husband, child - that’s how they saw it.  Logic suggests to me that Alvina knew Andy would be at - perhaps at her behest?  But I am not sure she knew the fire she might be lighting.

So the stage was now set for Madeleine Ruckstuhl to meet a bachelor named “Andy”, C.W.Anderson.

Charles Ruckstuhl is the stepson of the famous horse artist and author, C.W.Anderson.  He has known "Andy" as his family called him, since 1927 when he first met Charles' mother.  Charles therefore knows Andy well enough to portray not only his genius as an artist, but also as a poet, a lover of music, and an expert horseman.  This book is unusual in that it is not only a biography, but also a book not only of Andy's poetry, but also a compendium of his never-published pen-and-ink and pencil drawings, especially of trees that he loved for their natural geometry and design rhythm.  This book also delightfully shows his sense of humor back in the 1926-1934 era when his cartoons were published in the New Yorker whose staff has generously provided Mr. Ruckstuhl with copies of his early work for them.  Additionally, the book contains a series of never-published ditties or doggerels superimposed on typical cartoonism.  The content is typical of the art deco era and carries with it naughty connotations of a society not yet immersed in problematical  behavior.  In contrast to this lighter side of life, the chapter containing his poetry and sketches of trees and expanses is indeed emotional.  These 47 short verses were writtem for Mr. Ruckstuhl's mother each morning and were put on her breakfast tray daily during her remainng weeks.  The short poems, in a most heart rending way, combine Andy's intense love for his wife, Madeleine, and simultaneously portray the dying flora of the past summer.  The ebb of nature and failing human life combine profoundly in the melancholy domain of his pen.

Charles Ruckstuhl is an M.I.T. graduate engineer with a graduate  background.  This combination has led him to publication in The Washington Times magazine World and I.  He has also been published in The Groton Landmark newspaper with a monthly historical column on .  He has also written in The Monadnock Ledger, The Exeter Review, Reminisce, and in the New York Times.  Ruckstuhl has published the book Forgotten Tales of Groton, an earlier version of Andy as I Knew Him and has started a magazine Spare Moments.  Ruckstuhl is trilingual.  At one time he spoke only French.  He plays the piano, guitar and bass and has written some 50 popular jazz pieces.  He is also an amateur radio operator and astronomer.