The Left Boot of Fellowship

how people are forced out of churches 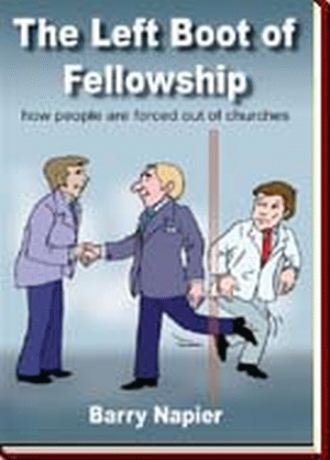 The title of this book might at first seem to be inappropriately light-hearted. It was given to me by a cynical ex-charismatic*, who had plenty of experience of being shunned and badly treated by churches he had attended and, sadly, it describes many acts of disfellowship or excommunication that occur today.

He also quoted a truism that has been floating around churches for a while now – that ‘if you want to be abused or badly-treated, join a church!’ An indictment that, though cynical, all pastors should take note of. (*A recent PhD in sociology thesis states that charismatic churches in particular lose members at a rapid rate! Many of these leavers come under the heading of excommunication. See Appendix).

Let me introduce the problem by describing my own experience, because this is where the idea for writing this book really began--

It was about 25 years ago, when I was attending a local Calvinistic church led by a well-known minister. Unfortunately, he was placed on a pedestal by everyone. For my part, I accepted everything he said as true, without really checking. This, I came to realise, was far from Biblical.

Until that time I blindly obeyed whatever I was taught by any minister, including him. Indeed, when I preached I even tried to mimic his preaching style, or that of his deacons! Really, looking back, it was rather pathetic. Needless to say I failed miserably.  (When I left that church my speaking ‘style’ changed dramatically).

One Sunday afternoon, during a Bible teaching session, I asked him an ordinary question, adding “Please give me what the Bible says, and not what commentators say”. His friend (also a pastor) sat next to me, and I heard his sudden intake of breath.

Later, he said in low tones, ”You were very brave! Now you’ve made an enemy!” For the life of me I did not know what he was taking about, but all was revealed as time progressed and my minister cooled his attitude toward me. Before my simple question he was supposedly my best friend. But, as I discovered to my cost, I had (so I was advised) ‘directly challenged his authority’ by seeking a Biblical answer and not his own musings! This started me thinking about my relationship with him and it kick-started my own line of thinking. Until that time I did not know politics existed in the churches.

A year or two later, something happened that devastated my extended family and the church. It involved two young men who pretended to be Christians. They deceived the whole church. My minister asked me to secretly find out what I could about them, which I did. Then, I was asked to attend a meeting, because I had everything I needed to expose the two men.

But, what happened next was like being mown down by a truck! The minister, with a deacon as witness, proceeded to crush me in a very unchristian and uncharitable manner. The deacon simply followed his lead, as he was totally besotted with his leadership at the time and knew nothing of the ‘secret mission’ I had been asked to undertake (what a fool I was!).

That meeting was so vile I was totally stunned and could hardly speak; it was bristling with a barely-controlled venomous rage. My mother was with me and she said that I looked like I had just been murdered, such was my utter confusion and outraged spirit. It was the last time I attended his church (which he considered to be ‘his’ in every sense).

The minister, on that day, showed me the sham of his pastorship and my own stupidity for being fooled. I determined never again to submit myself to such men and within another few years I was strongly prompted to leave the ‘system‘ of churches because they did not conform to scripture. I then began my own pastorship, resolving never, ever, to become like that minister and so many other ministers of his type.

What I am describing is ‘constructive disfellowship’ (see later sections), where a church or minister, by their awful and unscriptural behaviour or teaching, make further attendance impossible.

Just before submitting this manuscript to the publisher, I went to the wedding of one of my nieces. I arrived at the small church in a town just outside my home city. It was not until the service began that I noted who the minister was – it was none other than the very same deacon who consented to my utter devastation all those years before!

I decided that maybe he had cooled down and had learned from his error. After all, he was himself devastated when his beloved minister committed adultery and shamefully left the church, bringing out all the stories of other people he had similarly harmed so unbiblically.

I sat through the service, which was okay, if blandly ‘standardised’. Later, outside the church when the photographs were being taken, he stood near me. I thought I would make the first move and made my way toward him with a smile, ready to make the peace (though I had done nothing wrong). But, he ignored me completely and looked straight past me, walking instead toward the church.

After so many years of the same attitude from many others, I shrugged it off. It no longer hurt. It was just another sign to me that the man had not learned anything from the past, about scripture, or about God’s grace, or himself.

Later, at the wedding meal, he again ignored me, though he talked with others in the extended family. I did not try to approach him again, because to do so would indicate ingratiation on my part. I had no need to explain myself or to seek his approval, so I just enjoyed the day as though he was not there. On another occasion years earlier he had shunned or avoided me, so there was no excuse--

My wife and I remember with some amusement the day that the man and his wife saw us in a supermarket. Not realising that we had a clear view of them, they saw us and hurriedly ‘escaped’ up another aisle hoping to miss us. Can you imagine their horror when they suddenly met us fac

To the author’s knowledge this is the very first book to tackle the taboo subject of excommunication.  It defines what excommunication is, and highlights the shameful fact that thousands of genuine Christians are either forced out of their churches by leaders, or by their own consciences.

The book looks at examples from history and from both Roman Catholic and Reformed cases.  Particular mention is made of John Knox’s formulation, but the main aim of the book is to describe what the Bible says.  Dr. Napier believes that God’s word is the only measure a church should use, and so he sums up the scriptural position as the only feasible one to use.

In the 1990’s the Toronto Blessing took control of thousands of churches worldwide.  Dr Napier was on of only 3 Christian teachers to recognize this as a false movement of God.  So he led opposition to it, much to his cost.

The Alpha course, so enthusiastically accepted worldwide, is the ‘theologising’ arm of the Toronto Blessing and charismaticism.  For this reason the Alpha course has been examined by Dr. Napier, who completely obliterates its teachings as a ‘false gospel’.

This book is not afraid to speak out against the thousands of cases of excommunication resulting from charismatic teaching and the Toronto Blessing, which devastated authentic Christianity.

Barry Napier is founder of Bible Theology Ministries, based in .  The ministry also has two web sites.  He is pastor of a small church and specializes in doctrine and opposition to erroneous teachings.

Barry has several degrees and professional certificates, an ‘A’ grade doctorate in theology, and wide experience as a Bible teacher, speaker and college lecturer, altogether spanning almost 40 years.  He was the first Christian to research AIDS, and leads opposition to the Alpha course and charismaticism.