Plot your Course to Adventure

How to Be a Successful Cruiser 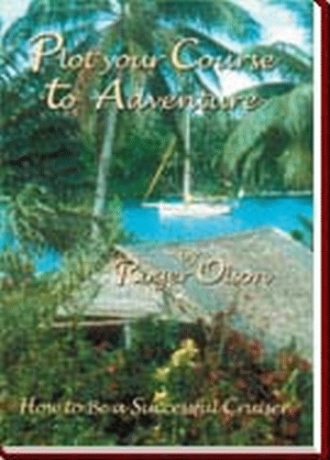 Stern anchor line shouldn’t pass through a deck pipe into the locker.

The time may come when the bow anchor will drag, and the stern anchor will have to be thrown overboard in a hurry. If the stern anchor line is led through any opening like a deck pipe or hawsehole, every foot of remaining line will have to pass through this hole before the boat can get underway. If the line passes through a hawsehole to a cleat, always pass the line back through the hawsehole so it can be released to run free.

On my own boat, I keep my stern anchor line and chain in a bag in the lazarette. The stern anchor is tied to its chock on the boomkin or on deck. When I want to deploy the stern anchor, I have to attach the chain to the anchor swivel with a split pin or Cotter pin.

I deploy the anchor by hand and lead it out by hand until I get the scope I want. I pass a loop of anchor line through the hawsehole, around the cleat, and back out the hawsehole. Now, I have some control.

After the anchor is set, I secure the line to the cleat as normal, but the remainder of the anchor line is fed back out the hawsehole, then to the bag. I tie the stern anchor bag to the outside of the stern rail or pushpit with a slipknot.

If something happens and I must get underway in a hurry, all I have to do is cast the rope off the cleat, pull the slipknot, and it’s gone.

I would like to share an incident that happened to me when I was anchored in . I am certain these ideas prevented my boat from being severely damaged.

I was anchored up a river in front of a quaint, casual, local yacht club. Boats would normally set with the bow facing against the river’s current. If the wind was fresh and the current light, the boats would swing broadside to the current, or sometimes, they would begin swinging 360º. Therefore, most boats anchored using a bow and stern anchor in order to remain pointing into the current. I followed my fellow cruisers’ lead.

One night, a severe squall hit, with 40-knot winds gusting to 60, and horizontal rain. It came from the same direction as the river’s current. I peered out my portlight to check if I was dragging. I could see the boats on either side were stationary, so I was sure I was okay. Suddenly, horns began to blow. Spotlights hit my boat. The horns warn all boats that someone is dragging. The spotlight is shone on to the boat with the problem. The spotlights were on me.

Stark naked, I jumped on deck. I looked around and confirmed that I was not dragging. Then, the spotlights moved off me, perhaps because I was naked, to a barge full of gravel heading right for me. It was apparent that the barge had broken loose from its mooring up river. It was nearly over my bow anchor already.

I started the engine, cast off the stern line at the cleat, and threw the anchor bag overboard. Then, I ran forward and released the snubber line from the bitts. I released the clutch on the gypsy so chain ran free. Xiphias began moving backward with the wind and current at about the same speed that the barge was coming down on me.

I ran aft and shoved the engine in reverse, then ran forward and grabbed the diving knife I store on the mast. Chain ran out quickly. With no one at the helm, my stern began to move to port. As soon as the rope that was tied to the last link reached the deck, I cut it. I ran back to the helm and reversed out of the path of the barge. It missed me by only a few feet. This all took less than

Are you tired of the endless monotony of your daily routine? Have you fantasized about escaping to colorful, exotic islands? The desire to take your own yacht to places you have only dreamed about can become a reality if you acquire the right attitude, the right boat, and some basic nautical skills. The purpose of this book is to help you, the reader, better understand how to achieve these three objectives.

Drawing from his own personal experience of more than twenty-five years of cruising, Roger Olson discusses a wide range of subjects at length, from selecting the proper cruising vessel or refitting your own boat to the appropriate ways of ensuring its seaworthiness. He offers clear explanations on how to handle the sailing vessel in diverse situations and conditions. With him, you will explore different methods of deploying your anchors, as well as a variety of strategies a cruising sailor can utilize in case of an approaching storm. Even the more technical subjects are addressed in a comprehensive, easy-to ­understand manner, and Roger has included numerous diagrams to help clarify and illustrate the ideas and techniques presented in these pages.

The breadth of topics covered, from how to manage mundane problems such as doing laundry and opening coconuts, to dealing with sores and wounds, rats and cockroaches in the tropics, will amaze even the saltiest of cruisers. Yet his step-by-step instructive style will give the beginning sailor the confidence that after reading this book, he or she will have the tools and skills needed for a successful cruise – and the adventure of a lifetime. Roger Olson has peppered his narrative with humorous anecdotes, tragic accounts, and personal stories that reinforce the proper strategies, emphasize safety issues or explain local customs. This book is an absolute must for every cruising yacht's library.

Roger Olson, M. Ed., taught for fifteen years in , spending his summer vacations cruising in the . He eventually sailed a 20-foot trailersailer around . This adventure, published in Yachting Magazine in 1976, created an intense desire to experience other foreign lands. After owning many boats, he found the perfect sailing vessel. He named her Xiphias and set sail to cruise around the world.

After thirteen years of blue water cruising, he returned to the and bought the Sam L. Morse Company, a boatyard that produces fine offshore sailing yachts. He worked there for ten years. Today, he is back at sea aboard his new yacht Nereus, doing what he loves best – cruising.