Origin of the Solar System

Accretion Disk or No! 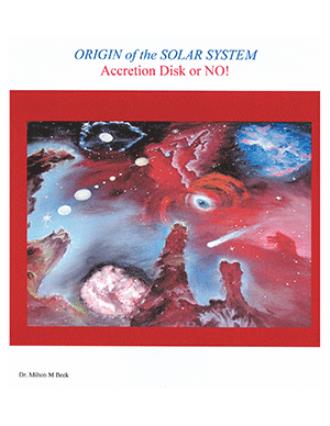 Most of the masses that formed our solar system came from the outer hydrogen and helium shells of a giant star blown off during the first stage of its destruction.  This material was blown off the large star in masses ranging up to solar sized masses by the sudden ignition of the helium as it began to fuse and form carbon.  The energetic onset of helium fusion caused some of the shell of hydrogen and some of the helium shell to be blown off (Kaler, 1998).  Some time later, the giant star underwent a catastrophic core collapse when the temperature of the core reaches 3 billion degrees Kelvin at which point the iron nuclei of the core begin to melt back into light elements.  This is an energy absorbing process and the core, about 2 solar masses with a radius of about half the size of the Earth, loses its pressure support and the star suddenly falls inward on itself.  A terrific rebound shock wave in the imploding star results when the in falling matter suddenly collided with itself at the core.  The rebound shock wave blew out more of the collapsing star.  Shells which contained elements of oxygen, sulfur, silicone, and nitrogen were shot out by the shock wave (Kirshner, 2002).   Only a small neutron core may remain of the former massive star.  The heavy elements of nickel and iron, as well as all elements heavier than iron, were shot out with explosive force and velocities higher than the material of previous ejections.  The elements heavier than iron were formed during the last stage of destruction of the giant star type II supernova.

The heavy element remnants of the star eventually caught up with the light element masses.  The rocky/metallic bodies captured some wisps of the light elements, this included elements such as sulfur, silicon, magnesium, calcium, oxygen, nitrogen, carbon and later, also hydrogen and helium.  The light elements that were added to some of the rocky/metallic bodies combined with the rocky materials and formed the crusts and mantels of those rocky and metallic bodies.  The gaseous elements formed the atmospheres of those planets to be.  The oxygen and hydrogen collected by the Earth reacted and formed the water that forms the oceans, lakes, and rivers of the Earth.  Venus obviously also collected a significant amount of lighter, gaseous elements.

Some of the heavier element remnants of the star were absorbed by the gas giant masses and the forming Sun.  An example of such a possibility is seen in the Hubble photographs of the Dumbbell Nebula with close ups of the knots.  The knots may be formed “when hot, fast shells of nebular gas overrun cooler, slower, previously ejected ones” (Trefil, 1999).  These knots have been found “in all the nearby planetaries (planetary nebula) imaged by the Hubble telescope allows astronomers to hypothesize that these glowing objects may be common features in planetary nebula.  Iron and rocky masses, larger than the Earth, caught up with the gaseous masses and plunged into them and became the cores of the gaseous bodies and catalyzed the collapse and formation of the Sun and gas giant planets.  Some of the heavy iron element masses became the cores of the inner planets, some smaller ones became asteroids, while the silicon and magnesium shell matter became the crusts, mantles, and moons of the planets, as well as some asteroids of the solar system.

A giant star did undergo a supernova explosion.  Prior to the supernova, of what I believe to have been a 20 plus solar mass star, the elements of the star were located in certain shells of the star.  With shells or layers somewhat like an onion and specific elements found within each shell.  The elements had relatively discrete locations within the mother star and were not uniformly distributed throughout the star.  The nuclear fusion reactions within the various shells lead to heavier and heavier elements, up to the element iron.  Fusions of the elements to form even heavier elements than iron are reactions that result in energy loss rather than energy production.  Elements heavier than iron were produced during the supernova itself (Marschall, 1998).  The boundaries of the shells within a large star are not distinct like the layers within an onion, nor do they form divisions between the shells.  Each of the shells blends into the next shell as a continuum, with specific nuclear synthesis reactions at the various depths or areas within the star where heavier elements or isotopes of elements are produced (Kaler, 1998) (Constable, 1990b). The pressure release did not occur with the tremendous force of the later stellar explosion at the final death of the star.

When there is an explosion or crash that destroys an airplane, the pieces are collected and then laid out in relationship to other pieces of the former airplane.  This is done so the investigators may be able to piece together what may have caused the airplane to be destroyed.  Each recovered piece of the airplane has a recognizable composition and form pertaining to its origin in the destroyed aircraft.  The “parts” of the former star after the supernova may not have recognizable fo

This book contains the reasons why the author does not believe the accretion disk origin theory for our solar system.  That theory might fit other system, but not ours.  The author first shows reasons why the currently accepted theory doesn’t fit.  He goes from one facet of the accretion disk theory to another discrediting each in turn.  The author then describes his own theory.  The author has made a good effort to define a sequence of events that resulted in our solar system.  How well his theory is accepted remains to be seen, but he asks for a fair chance for its evaluation.  He presents an interesting idea.

Milton Beck lives in the state of after retiring from a career in the environmental field and as a practicing veterinarian. After leaving the veterinary field due to health, went back to school to obtain a degree in education.  During the science education studies he took classes in astronomy, with great interest.  One class included the theory of the origin of the solar system.  The explanation for the origin of the solar system did not sit right with .  He began an 18-year search for information that allowed him to come up with an idea that at least to him made more sense.  This book is a result of that search.