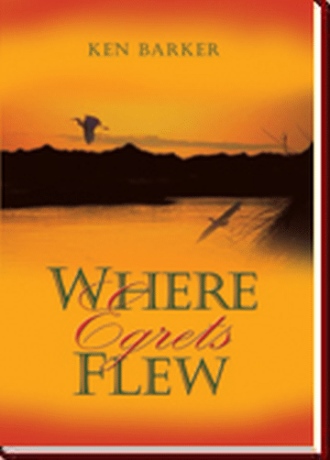 Josh's mind whirled with unanswered questions when he thought about their future.  Certain matters haunted him.  After their skirmish with the Seminoles, for example, he wondered if the Indians would pose a constant threat to their existence.  Would they be able to defend themselves and their livestock from the panthers, wolves, and bears?  He continued to ponder the tribulations that might be awaiting them in the wild and soon realized that the more he agonized over those kinds of thoughts, the more negative they became.  He had to quit this line of worrying and reasoning and present himself positively to the others.  He couldn't hide his feelings from Ginny for long--they read each other's moods like words in a book.

The family had rested long enough, and now it was time to move on.

Buck and Lil sat cross-legged in the center of the hollowed-out cypress dugout as Long John, their newfound Seminole friend, expertly poled the cypress boat.  They glided towards the great swamp and neared the stately bald cypress, which signaled the beginning of Atseenahoofa, the great swamp.  The whiteness of the plumed parent egrets shone like a blanket of frost on the branches of the trees.  The canoe quietly skimmed the water closer to the rookery, their intrusion caused many loud fluttering squawks.  Fortunately, no mass exodus from their nesting haunts began.  They heard curious yelping cries and queer deep grunts.  Long John explained the sounds were fuzzy young birds, hungrily calling to their parents, their wide-open beaks ready to accept regurgitated meals.  Acres upon acres of trees were covered with stick nests, all containing young egrets.  They saw many adults, but were told that most had flown to distant feeding grounds.  They would return by the thousands just before dark.  The more mature birds were ornately clad with long white nuptial aigrettes that grew from their heads and shoulders and would extend, when fully mature, past their tail feathers.

Long John poled them through the dark coppery water channels, which only someone familiar with the swamp would have known about, to show them more.  They saw alligators and snakes resting on logs and cruised the dark labyrinths of the great swamp.  It was a day they would relish and remember for years and years to come.

Ginny's reaction was quick and instinctive.

An explosion reverberated throughout the countryside and smoke rose from a blinding flash.  Gun power seared the cat's fur as lead balls pierced its side and ripped flesh from its underbelly.  Still, the charging panther slammed into Ginny, knocking her to the ground.  The cat, blinded and enraged by the lethal wound, lashed out aimlessly at the terrified woman, slicing through Ginny's nightshirt and tearing flesh from her thigh.

Where Egrets Flew is a historical fiction novel set in the mid 1800s, an epic adventure about the Spriggs family who traveled from the foothills of to the semi-tropical wilderness of south-central .  Where Egrets Flew relates their encounters with settling in the harsh and wild frontier and their struggles in eventually building a vast cattle empire from the wild-eyed, long-horned scrub cattle that had inhabited the land since the sixteenth century.  Where Egrets Flew is a story of men and women who faced Indians, war, wild beasts, and other elemental hazards.  Where Egrets Flew is a story of love, passion, and the loss of loved ones.  It is a book written in the tradition of John Jakes, Louis L’Amour, and Patrick Smith, the author’s favorite writers.  This is one of those novels you will have difficulty putting down.

Ken Barker, a graduate of , has lived in central for more than fifty years.  His passion for the early history of the area and his deep desire to accurately portray the pioneers, the wilderness, and the wildlife as it was from 1843 to the 1870s prompted him to research and write this historical fiction novel.  Barker masterfully intertwines his fictional characters with real pioneers, and their trials, tribulations, and accomplishments, and real events.  He has vividly and in splendid detail recreated central ’s semi-tropical environment, combining fourteen years of exhaustive research into the period and his personal knowledge of the countryside.

Barker is a retired investment executive and former practicing CPA.  He is an avid fisherman and has fished many of the lakes depicted in his novel.