Things I Never Learned at School 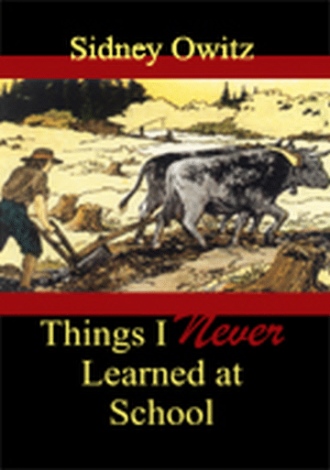 Five thousand years before the birth of Christ, the ox was working for man. This loyal beast of burden has been a non-complaining servant to man ever since – and maybe even before then. He, with the strong muscles and weak brain, has helped his master with the weak muscles and strong brain to do his work for him. He obviously cannot think for him, but he can move his loads for him, he can help plough his fields and cultivate the land, he can haul and can pull, he can climb mountains, he can swim across rivers. He is calm; he is powerful; he will be your slave for an exchange of only grass and sage and brush and water and a rare rest. The ox is large and clumsy, weighs about one or two thousand pounds and is usually less than four feet tall. For sheer strength there are few that can equal him. And for the ability to stick to the job and not give up, the ox has no contenders that can compete with him.

The ox is a draft animal – it can pull loaded carts and plough fields and turn water wheels; it is also a pack animal – it can carry a heavy load on its back. The male has been castrated and hence will never sire a calf, which perhaps accounts for its sad expression. Castration has caused it to be more docile and, like eunuchs, bigger and stronger. How did the inhabitants of Sumeria and ancient Mesopotamia know that if a bull was castrated it would produce an animal that would work for you and be obedient to you? The ox works consistently and will not turn on you. A bull cannot be made to work, and can be dangerous. A horse is more gentle, will not work as continuously and needs more care. A mule can travel faster than an ox but is not as powerful and is more obstinate. No wonder that the ox has stood the test of time and has been man’s best labourer for at least seven thousand years. The ox does not answer back and does not ask for bigger wages. He –actually he is neuter – is predictable.

Until well into the second half of the nineteenth century nothing could equal the ox as a worker. Not until the industrial revolution did the ox meet its equal and superior. The invention of the steam engine, the plough, machinery, and later in the twentieth century, the development of the automobile engine, electricity and the aeroplane finally gave our millenia-old friend a respite. Go to many third world countries – and even in many areas in America to-day – and you will find our old friend still at work, toiling through tropical heat-waves and sub-zero temperatures. Despite the fact that we robbed him of his manhood he does not bear a grudge against us and still serves us.

When the American West was being opened up and when the South African Boers were trekking into the interior of Africa, who was in the forefront of the exploration? None other than man’s best friend, the ox. I do not wish to take the title away from the dog. The dog is man’s best friend when he is at play. But for services rendered, for the value of the work done the ox has no equal.

In South Africa, when the Afrikaaners trekked away from the Cape Province they packed their wagons with all their belongings, all the goods and materials that they had collected and used, their cooking utensils, their clothes, their furniture. The wagons became their home, their cartage trucks and their transportation. This was their environment for many months [sometimes years] until they found a place that they could call home. The ox-wagon led them along the plains and over mountains. They climbed the mountains slowly at their own pace. The wagons creaked; they sometimes broke down and had to be put together again; but they continued to move forward. Thunder struck from the skies, lightning flashed from rock to rock, but the journey could not be stopped. The caravan proceeded; a destination for the night had to be reached. Nothing hurried them, nothing stood in their path. In their own time, at their own pace they reached their goal. And when they reached a resting place for the night the Boers placed all the wagons in a circle forming a central courtyard. Within this area they felt safe. It was like the old cities built with walls around them to hold out strangers and invaders. And if there should be an attack by hostile tribes they would have the comfort of knowing that they were not openly exposed. There was time for the menfolk to get down on the ground, place their rifles between the spokes of the wheels and fire at the enemy. This circular pattern of the ox-wagons was known as a “laager”. In that manner the trekkers were able to advance day by day and open up a hitherto “dark” continent. The ox-wagon was their means of transport and their means of defence and their temporary home. This was a traveling fortress. This was their castle.

A similar situation occurred as the West was opened up in North America. When large sections of the population moved they also traveled by ox-wagon. This was the case when the Mormons left New York and Illinois and found a home in Utah. It is true that horse-drawn wagons were often employed, especially for speed travel and for mail delivery. But for the “donkey work” there was nothing like the ox-wagon, especially for the uneven terrain so often encountered. And who, at the end of the day would cuddle up with the ox, as we do with our dog or horse, and talk to him and embrace him and thank him for a job well done? Nobody.

After the ox-wagon opened up the trail, others would follow. The rest of the family and the neighbours and friends would come. They would bring up more supplies and building materials and useful and indispensable utensils and books. And then a town would be built.

Where would we have been to-day if there were no ox-wagons? Would the South African interior or the American West have been opened up so soon? Unlikely. But, of course, with more modern mechanisms that developed in the twentieth century   they probably would have made up lost ground. Where the ox-wagon arrived yesterday we have civilisation to-day. That which was forbidden territory in the past has become many peoples’ friendly abode in the present. But it also brought the settlers into contact with strange tribes of people that had never been seen or known of before. The settlers wanted land to grow their crops and to have as their own for farming and living, and having their children. Conflicts with the indigenous population developed, some of which have not been solved until this day.

Then in the 1880s came the rinderpest in South Africa, an epidemic of an infectious disease amongst cattle. It decimated the ox population of the country. Many were forced to use mules for transportation. But the railways were now being built acro

The unpredictability of man is stressed in the biographical sketches presented in this book, which resembles the unpredictably of nature.  The struggles of people are evident in their different aspects of life.  These are things that are not learned at school, but in the workshop of life, where experience becomes one’s teacher.  This collection of essays brings forth a love of people, a love of and respect for nature and a deep sense of history.  There is also a commentary on the direction medicine is taking today.  There should be much to interest everybody.

Sidney Owitz, a native of South Africa, has accumulated a number of his essays which he has placed together in one volume.  This is unlike his first book Unshuttered Windows which was basically autobiographical.  As a physician he introduces his way of looking at the world and its people around us.  He was educated in South Africa at the University of Cape Town, and since then he has practiced medicine in South Africa, New York and Florida, where he now resides.