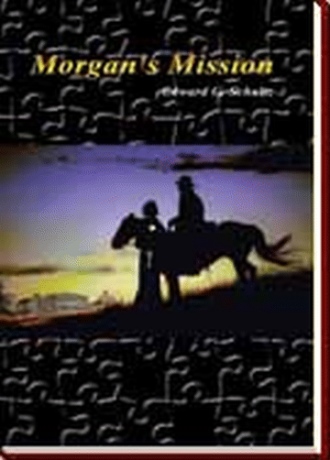 The next morning Juan came to arouse Morgan at dawn. Morgan had slept on a tule mat out in the open, near a fire place. "Angelica is much worse!  She is rolling in great pain and is very warm in the head!". The two ran to the hut. Angelica was now moaning loudly, rubbing her stomach fiercely and pleading for help. Juan held her hand and Morgan ran out, through  the midst of the huts calling out for help. He knew that no one would know his English but his desperation was coming through in his calling. Several people came from their huts, including the mid-wife that Morgan saw yesterday. He motioned for her to come with him to Angelica's hut.

On entering, the native mid-wife looked very somber. Angelica was already showing signs of weakness. The mid-wife knelt beside her, holding Angelica's head on her lap. She looked at Juan. It was obvious to Morgan that the woman was telling Juan with her eyes that Angelica was dying. Juan suddenly realized the silent signal and grasped Angelica to his chest, hugging her as if to hold her from leaving in death. "Santa Madre Mia. clementia! Por favor, clementia!" he pleaded. With just a few more gasps, Angelica passed away.

As Juan hugged Angelica to himself, swaying and murmuring her name, Morgan went to Juan, placed his arm about Juan's shoulder and swayed with him. What else was he to do? How could he help his friend face the immensity of his loss. What could he do to ease Juan's pain, while at the same time admit to himself that dear Angelica would never again smile at him, or speak his name.  Now he felt selfish. It was Juan that had lost his dear wife, and only one day after losing the baby son that she bore.

The village wot came to speak to Juan's father. When Juan sensed what the conversation was about, he arose showing anger. He argued with the chief and his father. He turned to Morgan suddenly. "They want Angelica and the baby to be buried here in the village burial ground. I will not permit it!". Pushing away from the two men, Juan reentered the hut. Morgan followed. Juan was wrapping Angelica in a blanket. He then did the same for the baby. Looking at Morgan with pleading in his eyes he said, "Mi amigo, will you help me carry Angelica and our son to the Mision? I want them buried there. I want Padre Payeras to pray over their bodies and their graves". "Si, mi amado amigo", Morgan softly replied.

Within the hour they were ready to depart the village. Juan bade a brief goodbye to his father, nodded his thanks to the mid-wife woman, and picking up Angelica's lifeless body, indicated to Morgan that he was ready. Morgan picked up the tiny baby and the two walked to the trail leading down to La Purisima.

After a while Morgan suggested to Juan that he should take a turn to carry Angelica, but Juan would not allow this. Nor would Juan, who was leading, slow his pace. After a while, as they walked, Juan began to speak, almost as much to himself as to Morgan. "It is the will of Dios!  We must accept the will of Dios!. It is just as well that this poor infant was not born into the world, for surely he would have shown indication of his forced father's likeness and never would have been accepted by the people of my father's village." When Morgan grasped what Juan was saying he rather impolitely asked, "Are you sure that the baby would not resemble you?" "No", Juan replied, "he could not resemble me".

In this epic novel about the enterprising Mission Era of California, the author presents a compelling account of the courage of one “yankee”, who is cast among the Spanish padres, as they attempt to simultaneously satisfy the many demands of their government and their church.

Based largely on historic facts, the story tells of the arrival of the young “yankee”, of his unexpected impact on the padre’s endeavors, as well as on the culture of the Native Americans. It relates an intriguing story of the colorful and fascinating events, which ultimately lead to the entry of California into the union of the United States. By the use of interesting characterizations, many taken from actual history, the novel creates a powerful sense of involvement in this hectic period of history.

The novel’s main character, Charles Morgan, his marriage to the daughter of the Vice Governor, his involvement with several obsessive padres, including one having struggles with his own sexuality, will fascinate the reader. This novel is a “must read” for those who are history buffs, those fascinated by romantic tales, and those who enjoy stories of adventure. “Morgan’s Mission”, with its many facets, will please all.

Edward G. Schultz was born in Pittsfield, Massachusetts. Following graduation from High School he enlisted in the Army. After discharge he became a self-taught draftsman, then a sales technician and ultimately a sales manager.

In these occupations he was required to do much technical and proposal writing. He enjoyed these activities and found that he could combine this avocation with his love of history. Often having to travel to California for business reasons, he visited and studied the California Missions and their effect on history. He was surprised when one day he discovered the grave of a “Yankee” pioneer among the Spanish inhabitants of Mission Santa Barbara. This and other related historical facts led him to write “Morgan’s Mission.”