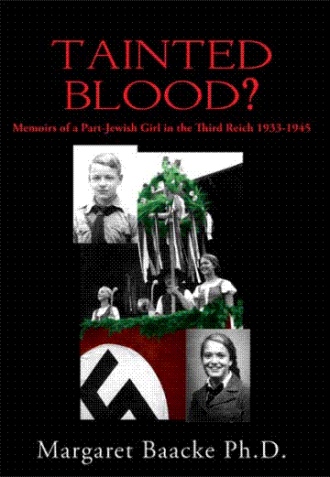 Click Here for an extensive Excerpt of this book.
Excerpt from The Verdict (Chapter 19)

Father slapped a stack of files on the table. His opening words were as puzzling as his whole demeanor. "We are Baackes and we can and will cope with anything that confronts us. We are strong and we don't flinch in the face of adversity."

Strange words for poor grades. Were we kicked out of school? Not a terribly upsetting idea. . . .Mother tried to stifle a sob. Father cast an impatient glance at her, then continued: "Fate has a way of hitting us where we are most vulnerable. “         How did this familiar quote apply to our situation? I wondered.

"We know who we are,” (it sounded a bit arrogant) ”and are proud of it, regardless of what other people may think or do," Father continued.

What other people? Weird. I was popular among my peers, . . .And Hans was his class's cherished top prankster.

When Father stared at the pack of files, another sob escaped from behind Mother's hands. Those finely modeled hands that always cared for us but now seemed to keep her head from slumping on the table.

"Today I received a letter from the Reich Youth Leadership Office." Father’s face was serious and composed, his voice strong, though his hands trembled slightly.

We lifted our heads. This was an unexpected twist.

"They have found out and acted upon something that your mother and I wanted to keep concealed from you."

My brother and I stared at each other, bewildered. What? There were secrets in our family?

"We didn’t want to destroy your youthful innocence and put a burden on your shoulders that you were not yet strong enough to carry. . . .

But now we can’t protect you any more from this secret." After clearing his throat, he continued, "You are no longer in the Hitler-Youth. They evicted you in September." . . .

This is no ordinary memoir. With amazing clarity, wit, and charm, retired Professor Baacke skillfully illustrates life in Nazi Germany. From her own first hand experience, she demonstrates the problems and hardships all German citizens experienced.

The author and her twin brother entered the Hitler Youth at age 12, unaware that they were part Jewish--and were kicked out in 1938. After being drafted to the Women's Reich Labor Service followed by the War Auxiliary Service for a total of twelve months she served as a 'staff helper' in a Luftwaffen Lazarett in .

In January 1945, Dr. Baacke escaped the approaching Red Army with most of the patients. It was the Steuben's second and last rescue mission before it was torpedoed by a Russian submarine and sunk. Of the 5.200 people on board, mostly women and children, wounded soldiers and refugees, 4.500 drowned.  She shares not only her own personal and often horrific experiences but also those of family and friends.

We see what a German soldier's life was like, through the letters and stories of her twin brother fighting at the Russian front. Professor Baacke candidly depicts the terrorizing air raids with fire, phosphorus and explosive bombs. She also describes vividly the brain-injured and mutilated soldiers in her hospital. Yet this book is not depressing.

She has interwoven stories of amazing strength, courage, and even joy.  Lastly, she has inserted facts to paint an accurate picture of the critical decades between 1923 and 1945. The reader walks away from this book with a deeper understanding of life in during the Nazi regime. Reading this book empowers the reader to feel that they can endure life's challenges and emerge unscathed in spirit.

Click here to view a VIDEO INTERVIEW with the AUTHOR
Margaret Baacke grew up in Berlin, Germany. She and her twin brother were born in 1923 during the difficult post-World War I era and experienced the even harsher period of World War II and the post war period. (One quarter of Germany had been ceded to Poland and Soviet Russia; what remained in 1945 was occupied by the four victorious powers.) From 1945 on, Germany experienced starvation and scarcity of most everything--until the American "Marshall Plan" brought relief to West Germany. Soviet-occupied East Germany refused assistance from a capitalist country.

With her twin brother Hans, Margaret (Gretel) Baacke joined the Hitler Youth at an early age; but as "Quarter Jews" they were both expelled after two years, thus the title of her memoir, "Tainted Blood?"

She was then drafted for a year to the Reich Labor Service and War Auxiliary Service, and then worked in a Luftwaffe Hospital near Königsberg, East Prussia, from where she, with hospital staff and patients, fled westward by ship to avoid the approaching Soviet army. She experienced the end of the war near Hanover and then enrolled in the University of Marburg in the State of Hesse, Germany. After finishing with the State Board and the Ph.D., she immigrated to the US in the early fifties, and then taught German at the University of Illinois (Champaign/Urbana, Illinois), Western State College (Colorado), Purdue University (Indiana), and Knox College (Illinois), until her retirement in 1989.

She now lives in a quiet neighborhood outside Austin, Texas and is planning to write a second volume, spanning the time from 1945 to 1953, when she immigrated to the USA.