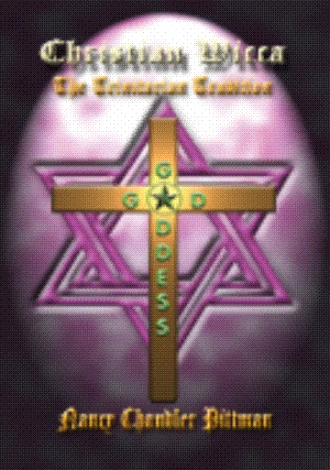 Christian Wicca is a new path of Christian spirituality and a new tradition of Wicca, often referred to as the modern term for the Old Religion, or “the religion of the wise.”  Christian Wicca is the practice of Wicca acknowledging the Christian Godhead as the practitioner’s choice of Deities, recognizing both the male (God) and female (Goddess) aspects of the One Triune God, as well as the promised Solar God (Jesus), Lord and Saviour.

Wicca is the revival of the religion of the wise, recapturing its spirit and practices.  This modern practice is based on the old ways of communing with the Divine through Nature, along the lines of the Latin phrase Deus et Natura, meaning “God and Nature.”  Originally, this religion did not have a name; it was simply what the people were brought up to believe.  It was not called witchcraft with all its negative associations until the Inquisition found it to be a threat to the rise of the new Religion in Rome called Christianity.

The term Wicca is derived from the old Anglo-Saxon word “wicce,” (pronounced “witch-eee”) and there you can see what gave rise to the commonly used word “witch.”  “Wicce” meant a practitioner of the Old Religion, as well as reflects the influence of the Old Norse word “vitke,” which meant “a priestess or seer.”  The word pagan is from the Latin “paganus,” which means “a country dweller.”  “Heathen,” another related term also misinterpreted, which means “one who dwelt on the heath.”  The heath would be the plains or flatlands.

The writings and teachings of Gerald Gardner of the New Forest coven in England mark the dawning of Wicca.  After the last of the anti-witchcraft laws in England were repealed in 1954, Gardner published his coven’s Book of Shadows along with others believing that the Craft was dying out.  He dedicated his life to retrieving lost information about the native religions of Europe.  This was a difficult task because most of the old religion was handed down from generation to generation by mouth; keep in mind that most farming cultures could not read or write.  Unlike Christianity, there was no “Bible” simply because the modern printing press had not been invented at the time!

This approach of communing with the Divine as the Holy Trinity via the personal spiritual methods of Wicca is the key to the name of this Wiccan tradition - Trinitarian.  The definition of Trinitarian Wicca is as an eclectic form of Wicca mixed with various aspects of Christianity, which may differ with each practitioner.  These sources of Christianity include the Holy Bible, the Kabbalah, the Apocrypha, Pseudopigrapha, and the Dead Sea Scrolls, especially the Gnostic Gospels.

Not all of the Judeo-Christian books written actually made it into the Holy Bible.  For example, the Apocrypha is a generalized term for any spiritual writings that are doubtful of authenticity or of questionable authorship.  The Books of the Apocrypha are the fourteen books of the Septuagint, or the Greek version of the Old Testament.  Judaism rejects the Apocrypha, as does Protestant Christians, who regard is as non-canonical.  However, the Roman Catholic Church fully accepts eleven of the writings into the canonized Catholic Bible.

The word "canon" comes from the Greek word kanon, a rod used to measure.  The meaning of canon applied to the Bible is a list of books considered the true authoritative scripture by a particular religious sect.

This is a very important time in the history of Christianity.  The Dead Sea Scrolls uncovered answers to many questions that the world has asked for over two thousand years.  The cover up of so many mistruths about Christ and the early Church is causing the world to rethink organized religion.  Many people are turning to Wicca, but they are not turning away from Christ.  This is going to be the most difficult point for fundamental Christians to accept.  The need for the presence of Jesus with the cosmic balance of a Heavenly Mother as well as a Heavenly Father is the new pathway to the Christian Divine - and many are taking this pathway by the means of Wicca.

The term eclectic is often associated with Wicca.  It is best defined as selecting and composing spiritual knowledge from various spiritual sources, magio-religious systems, and doctrines of enlightenment that brings the practitioner closer to the One True Creative Spirit.

The eclecticism of spirituality is becoming more and more prevalent in our society today as spiritual seekers of knowledge are becoming increasingly aware that there is no “single true way” of enlightenment nor is there any one single religion that has all the answers to the meaning of this life and the after life.  It deal

Christian Wicca:  Oxymoron or the Best of Both World?

Finally, a how-to guide for practicing Wicca, celebrating the return of the original Christian Trinity: the Father, the Mother, and the Holy Son Jesus.  This book is written expressly for Wiccans who wish to walk the spiritual path of earth-based religions, but do not wish to surrender their Judeo-Christian background.  Nancy now offers a simple solution to the rapidly emerging ChristoPagan community.

Wicca, the Old Religion, or the religion of the wise, is the fastest growing form of spirituality in the United States.  Many modern and eclectic Christians have no problem recognizing Jesus as Lord, but instead have a problem accepting the dogma of the organized church.  Seekers are also feeling the absense of the Female aspect of the Divine and wish to re-establish the Goddess in their spirituality.

In the wake of the discoveries of the Nag Hammadi Library, for the first time since 100-300 A.C.E. - the yin of the Christian faith is seeking to restore it's yang!  Despite the overwhelming evidence that there is a Divine Mother --- no one has applied this information to Wicca and the Holy Days of the Wheel of the Year.   "Christian Wicca: the Trinitarian Tradition" does this very task, outlining the Sabbats, the Esbats to include the Holy Trinity . . . also introducing observances expressly for Jesus, called Kyriats!  Blessed Be!!

Nancy Chandler-Pittman is a 40-year-old ChristoPagan author who celebrates her zeal for Wicca and magick through the Kabbalistic-Gnostic Pantheons.  She is an ordained Interfaith Minister, with an Honorary Doctorate in Divinity from the Universal Life Church.  Born on July 4, Nancy’s personality has formed as an independent thinker.  She is also a musician, an author, a teacher, and is in some senses a spiritual rebel.  She has always followed her own heart toward methods of communing with the Genderless Spirit.

A songwriter/musician since her early teens, she has written and produced several albums, and has founded an independent record label and distribution company.  From 1983 until 1998, Nancy traveled extensively, performing and promoting her music.  She has been featured regularly in major magazines and independent publications.

Passionate about the Tarot and mysticism since age 14, Nancy teaches a 36-week class on the Rider-Waite Tarot deck, stressing the Tree of Life, Jungian philosophies, numerology, and the Hebrew alphabet.  Now owning her own occult store, the Shadows and Light Shoppe, she encourages spiritual tolerance in the magickal community in North Alabama.

Nancy also teaches Wicca through open circles using a hands-on approach to coven work.  She teaches the celebrations of the Sabbats and Esbats from various Pagan traditions, combined with non-dogmatic Christianity.  Nancy firmly believes that magico-religious tolerance will be achieved through the studies of parallel philosophies, and comparative spiritual research.  Nancy holds true to these ethics in her teachings and life.